Perth, Scotland is undergoing something of an “enlightenment” where the planning process operates. A traditionally conservative city, there is evidence of a mediaeval core, and ancient St John’s Kirk, surrounded by 19th-century Georgian housing. Since Perth had been the capital of Scotland before 1437, it has much in common with many small cathedral cities, such as Armagh, or Lincoln, or even Uppsala with its university. In the case of Lincoln and of Stirling, the establishment of a new university has now had a major effect there. This has not yet occurred for Perth, only recently demilitarised after “two centuries at arms”, so to say. But the character of a city takes at least two generations to emerge from such a monoculture.

Writing in 1858, the German travel author Theodor Fontane commented: “There is a statue of Walter Scott which the grateful town has erected to the author of The Fair Maid of Perth” (one of the Fair Maid herself might have been more appealing as with Copenhagen’s Mermaid). But said Fontane: “What would the world know of Perth if that book had remained unwritten … To the right and the left (of the monument) are a couple of Russian guns … trophies from Sebastapol (1855), and no doubt captured by that very same Highland regiment which is garrisoned in Perth.”

Everywhere in this country one encounters similar signs of victory, the only fruits of a war that was all too costly. Ironically such effects recur anew today. Has the “Fair Maid” become a war widow? Yet it has to be said that Fontane visited Perth on a Sunday morning when the Berliner found to his chagrin, “instead of life and colour on the streets one encounters a deathly stillness”. Today there has fortunately been a degree of transformation. Perth is linked by motorway to Edinburgh and barely 45 minutes away by train, which of course renders it commutable with both an expanded financial services sector, and widespread arts activity. This spring that ancient “City” status has recently been restored by Royal Statute, removed in the local government restructuring of the 1970s. And now, as if to symbolise this fresh recognition, a remarkable street landmark has been inserted into this evolving community. Masonry-built? Yes. Self-effacing, on the front of it? Yes, but nothing less than a dramatic, street-scaled insertion, on a narrow gap site but which gives significance at the northern end of a long straight central thoroughfare, indeed one that angles subtly but obliquely at its final crossroads. Perth planners had a problem with this tight site – a sure case of micro-cellular blighting. Despite elegant classical neighbours there were no takers. Not even a fish and chip shop would go for it. But a solution emerged, whereby the much-employed “studio” property use could legitimately be applied. This is where remarkable artist/architect collaboration stepped in.

Arthur Watson is a well-established artist of international repute and newly elected President of the Royal Scottish Academy of Art and Architecture in Edinburgh. He met Perth architect Fergus Purdie at Dundee University, where they both teach. They worked together on projects, most recently on a Camera Obscura building on CairnGorm, at the ski centre in the Cairngorms National Park. The Melville Street site came up and the pair could see that the city planners found in it an insoluble problem. Then the studio solution emerged counter to all expectations, first demonstrated with a volumetric model by Purdie. Prescriptively through a “self build” process, including separate trades, the planners’ dour recommendation for refusal was finally overturned by the local planning committee and indeed approved by the Scottish Heritage Society.

The gap site was filled by what appeared to the uninitiated to be a stack of randomly contained masonry; but stone it was. The studio filled part of a semi-abandoned gap site with a former bakery behind it. There, Purdie and Watson together evolved a timber clad principal three-storey block within the strictures of the frontage yet harmonious to abutting apartment buildings to the North and South. The tree planting and landscaping of the small court, with the acquisition and restoration of the 17th-century bakery building behind, animated the space. It improved the outlook of the neighbours. A seemingly cancerous urban cell had become a benign reality.

Now Fergus Purdie, whose young family live nearby, has a working architectural studio at ground level, off the courtyard. Arthur Watson has a habitable live-in studio above, with sleeping accommodation on a first floor, all accessed by an industrial metal stair. On the top floor there is a main living/dining area, roof-lit, and overlooking the double-height studio space below. All is reached from the wide industrial metal external stair. A similar smaller stair leads to the upper level opposite the former bakery, now also restored with a wood workshop downstairs and additional studio above. What succeeded (and with the planners too, ultimately) has been the exceptionally high quality of material detailing, of masonry, timber and fenestration.

The long view from the south gives a stone building of readable urban scale: but with only one street-facing, ground-level window. There is the verticality of a small tower, but the scale is mediated by the randomised masonry walling, divided at 12 intervals by a series of elegant, thin horizontal “string” bands of dressed stone, bringing firmly to order the random rubble itself, with cut stone corners. The single vertical “civic” street window at ground level makes public the activities in art and architecture of the occupants, their collaborators and students. Entry to the courtyard is by a narrow pend typical in Scottish and European cities. This opens out to the courtyard containing a circular planted area (providing in local parlance a “Gudeman’s Croft” – an uncultivated enclosure set aside by farmers as a place “for the Devil” – a kind of life insurance against natural disaster, beyond sustainability codes) with a small cluster of silver birch. Site clearance earlier fortuitously unearthed stone flags, now set aside and re-used as paving to the new entrance path. The strong contrast of the external cladding of untreated “Scotlarch” timber helps to define the individual uses within the studio block as a whole.

Internally, the upper levels of the studio offer a double-height installation and exhibition space in one half of plan, with at second floor, kitchen/dining. Library stacks line the entrance and further the walls internally; the first floor level contains utilitarian but adequate sleeping accommodation and shower room/WC are located here. The space benefits from the light-well void and roof lighting above.

The Purdie/Watson collaboration has borne fruit only through their patient and tolerant negotiation with the local authority, and well supported by Scottish Architectural Heritage. There came also to fruition, a long period of mutual research and growing awareness about the work, ambitions, habits and skills of each individual. This project, now accomplished, offers lessons to planning authorities. It also builds on the growing articulation in an age of high technology art, of what kind of space each art form – sculptor, film maker or architect – really requires, and to what extent all skills can productively collaborate, share facilities, so networking and energising within those city-cells and nodes that urban diversity increasingly offers. The building validly joins today’s growing lexicon of contemporary architect-designed artists’ studios, increasingly a genre of high architectural quality in purpose-made design. In every case, it is the collaboration, which counts. 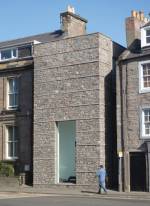 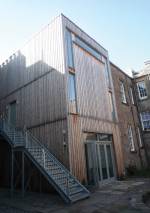 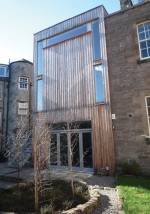 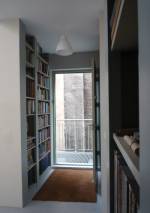 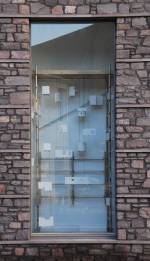 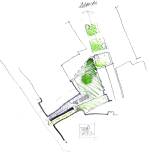