As two exhibitions celebrate the centenary of the birth of Polish artist and theatre director Tadeusz Kantor, Richard Demarco, who first brought him to Britain and has ensured his legacy continues, talks about his work

by JANET McKENZIE from conversations with Richard Demarco and Arthur Watson August 2015.

Exhibitions at the Royal Scottish Academy and Summerhall, at this year’s Edinburgh Festival, mark the centenary of the birth of Polish artist and theatre director Tadeusz Kantor. Richard Demarco first brought Kantor to Edinburgh almost half a century ago and, with him, the remarkable performance The Water Hen. The new digitalised video of that event enables audiences in 2015 to observe the inspired performance, and while the organisers are keen to point out that nothing can do justice to the event itself, it is a deeply moving experience, nonetheless. It was the Edinburgh Festival, 20 August 1972, and Kantor’s first encounter with a predominantly English-speaking audience, and Demarco believed that the moment should be recorded. Visiting the archive and exhibition at Summerhall before seeing the video at the RSA, Demarco explained his intention at the time: “The camera was held next to me, to my right, so that it was the record of one viewer’s experience. Being shot from a fixed position, parts of the action were sometimes obscured.” The making of the video was limited to one cameraman and one soundman (both unidentified). It was shot on one-inch type A reel-to-reel tape at the first performance. It is the only known complete documentation of The Water Hen and the showing at the RSA this summer is its first. Artists invited by the RSA have created new works in response to Kantor’s great work and in doing so have made The Water Hen contemporary in their own ways. As Demarco was keen to point out: “Kantor, like Joseph Beuys, is very much alive in the 21st century.”

Meanwhile, the Polish Cultural Institute in London and Polnisches Institut Berlin have brought a new perspective to Kantor’s complex oeuvre through the exhibition at Summerhall, curated by Dr Marc Glöde. It concentrates on the early phase of Kantor’s career, with particular focus on his work in the period from 1954-65.

The exhibition includes the long lost film Attention … Painting!, which won the experimental film prize at the 1958 Venice Film Festival, and explores the relationship between painting and moving-image. A superb key work, it is shown alongside Kantor’s drawings, gouaches, paintings, collages, manifestos and photographs. The emphasis here is the fluid approach Kantor evolved in his practice that transcends the art historical convention of viewing an artist’s career according to separate artistic mediums. The most important aspect of the Kantor work on show is from the artist’s 1963 Popular Exhibition that took place at the Krzysztofory Gallery, Kraków, where he defines in text what art could, in his view, encompass. “A List of 937 Exhibits” includes “sketches, drawings, projects, plans, ideas, definitions, analyses, manifestos, albums, instructions, recipes, records landscapes, battles, metaphors, metamorphoses, wrecks, destructions, obsessions, panoramas, letters, documents, commentaries, assemblages, collages etc”. A work of art, Kantor asserted, in as fine an account of the intentions of avant garde artists in the second half of the 20th-century as one can find, is NOT “an isolated panelled piece, brought to a deadlock and closed up in a structure and within a system, unable to change or survive”, for that constitutes a mere illusion of creation. What is essential for creation, for genuine creativity is, “fluidity, change, frailty, transitoriness, like life itself”.

For Kantor, art must also embrace “records of urgent problems, of ideas, of discoveries, plans, projects, schemes, scripts and scores”. The exhibition debuts at Summerhall and will then travel to Germany to the Polnisches Institut Berlin for Berlin Art Week. It is a reminder of the values in the 60s and 70s that infused great vision and energy into art, under the large umbrella of conceptual art, but which in many instances have been imitated beyond recognition and constitute what Demarco says is “nothing more than a false avant garde”.

It is quite valid to claim that the genius of Kantor’s work has been overlooked by the art world as a whole, yet with each piece in this exhibition, and backed up by the overwhelmingly impressive Demarco Archive – of which I was given a guided tour by Demarco himself – Kantor’s originality and his oeuvre is consistently proved to be of great importance.

The Demarco archive is so vast, so far-reaching in its value to the European avant garde and its impact on Scottish and British culture that it continues to perplex arts administrators and museum staff. A safe place for it has still not been secured. Demarco recently turned 85 and yet he lectures with certainty and immediate recall on all the details of the multifarious activities, exhibitions and arts events since he first visited Poland in 1968; he has since made more than 90 trips to eastern Europe. His great visionary colleagues included Kantor, Beuys and Paul Neagu, giants of 20th-century European art. An original component of the Demarco Archive is the “event photograph”. More than 300,000 photographs taken by Demarco constitute an exceptional documentation of the ephemeral nature of the art and theatre events he commissioned, and directed over a 60-year period based in Edinburgh.

What Kantor created during the Gestapo’s occupation of Kraków in a cellar beneath a cellar continues to stand out from the art and theatre of the modern world. He created his theatre pieces, which rose above the constraints of language, to express personal experiences marked by war, the tragedy of the Holocaust, totalitarian regimes, the Nazi occupation and Stalinism. He described his highly expressive theatre pieces as “Theatre of Death”. They were not ordinary plays, but events that combined art and theatre, that make one creative piece of artwork, a speculative total theatre.

When I spoke to Arthur Watson, President of the Royal Scottish Academy, he pointed out that both exhibitions belong to the project that has been running for more than 10 years, to make material from the Richard Demarco Archives more fully accessible, and to make connections between that material and artists working today. As the exhibition 10 Dialogues, reviewed for Studio International in 2011 revealed, Demarco enabled a phenomenal number of artists to be shown and become known in Scotland from the mid-50s to the present. His insatiable appetite for creative dialogue has barely flagged. The Demarco Gallery was founded in 1966 and soon developed an international stance and a commitment to emerging developments in sculpture, installation, film and video, site-specific work, performance and theatre. Close collaborations with Beuys and other Düsseldorf artists fuelled interest and dialogue with the avant gardes of Poland, Romania and (the then) Yugoslavia. Demarco had worked tirelessly to overcome the cultural ramifications of the political divide, through artistic connection and exchange; his indefatigable approach continues to this day.

Before electing Demarco as an Honorary Academician in 2000, the Royal Scottish Academy (RSA) had forged its own links with Poland. In 1941, the Annual Exhibition dedicated a room to the work of Polish soldiers serving with the Allied forces in Scotland. Then in subsequent years (1942-44), a room was dedicated to the art of allied servicemen, including Poles. A cultural dialogue was set to exist; however, the cold war made such discourse impossible. In the 1960s, both the RSA, on an official level, and Demarco, through a rich programme of events, publications, productions, were responsible for very many contacts made, exhibitions curated in Scotland and Poland, lives changed and life-long friendships established. 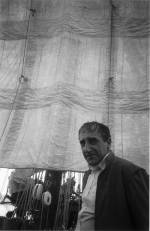