Drawing as the catalyst for contemporary printmaking in the UK

Drawing as the catalyst for contemporary printmaking in the UK

We look at how printmaking has influenced the work of Arthur Watson, Paul Coldwell, Christopher Le Brun, Charlotte Hodes and Grayson Perry

In the past 25 years the definition of drawing has changed beyond measure: conceptual, spatial, subjective, and employing a wide range of materials beyond the traditional. It is perhaps no coincidence that, in that time, from the hundreds of artists I have surveyed for their drawing practice, many of the best have trained first as printmakers, or dedicated a significant part of their careers to experimental printmaking. Recent research on drawing has acknowledged that print techniques such as linocuts, woodcuts, lithography and drypoint intaglio printing can be appraised as forms of drawing. The graphic impulse of prints assumed a more public role in the 20th century with the employment of affordable processes such as linocut. In Germany in particular, the dedication and fervor of expressionism enabled printmaking to flourish, sharing, as it did, the immediacy of the drawn line and the capacity for the production of multiple images.

In the 21st century, the tone of political engagement and individual self-determinism in art is strongly informed by the Germanic tradition: Joseph Beuys’s alchemical approach imbued his prolific output of woodcuts and etchings. Georg Baselitz’s chainsaw woodcuts and large linocuts amplify the traditional scale of the medium. Thomas Kilpper’s woodcuts are made by chiselling into a parquet floor, inking up using house paint and laying fabric on to the floor before hanging the works like banners. Franz Ackermann, ostensibly a painter, cuts into surfaces with the sureness of a master etcher and combines a range of disciplines in his collaged, painted installation works. As a student of Sigmar Polke, his work is multilayered in meaning, method and ambitious in conceptual terms. These artists can all be seen to have inherited the first expressionist artists’ passion for socially engaged art, in which drawing achieved a new level of urgency. Like contemporary art practice, their work was based on experimentation and collectivity. Subsequently the work of Beuys, for whom drawing was pivotal, and for whom the distinctions between traditional print techniques and mark-making became less and less important, continues to exert a strong influence on artists working in the present.

Before the advent of photomechanical or photographic processes, drawing was the essence of printmaking. Artists drew (and many still do) directly on to stone, metal plate or block. Throughout the history of print, artists have appropriated or adapted print processes to meet their personal vision. Woodblocks may now be drawn with a chainsaw and intaglio plates with an angle-grinder. Arthur Watson, current president of the Royal Scottish Academy, who set up the Peacock Printmakers, an artists’ print workshop in Aberdeen in 1974, observes: “While printmaking can successfully fuse the autographic with the photographic or digital, for many it is primarily a drawn medium. It would be hard to appraise the drawings of Honoré Daumier without his lithographs, or those of Tracey Emin without her signature monotypes.1

Collaboration is central to Watson’s work, which has its roots in village life, fishing communities and traveller communities – individual achievement is dependent on other people’s skills and contribution just as much as the talent of one. Particular superstitions and traditions relate an individual’s action to the existence of the whole. Printmaking studios and foundries are examples in contemporary art practice of a collaborative spirit, born of necessity, and dictated by traditional methods. For Watson, the making of art and artefacts is a natural extension of the need to understand one’s heritage, whereas in the 20th and 21st centuries a global culture overpowers and destroys indigenous ways. He addresses the issues that relate to cultural identity and survival in a personal and unique manner, through collaborative methods and organisational means that capture the very spirit of a peripheral culture in the 21st century.

Computer-aided printmaking has evolved at an extraordinary pace over the past 15 years, although the application of computers to fine art began in the 1950s. At the London Institute (now the University of the Arts London) in 1995, a research programme into the application of computer technology to printmaking was established, headed by Paul Coldwell. By layering and combining imagery and method, the final product comes to resemble a lithograph or screen print. Coldwell clarifies the relationship between drawing and his multifarious printmaking processes:

“There are artists like Giacometti where there is virtually no difference between his prints and his drawings, merely a slightly different surface to work on and either lithographic crayons or an etching needle in place of the pencil. For me, however, drawing represents the first attempts at making a visual equivalent to a thought or proposition. Much of this activity is essentially private, in sketchbooks and scraps of paper, and is part of me trying to move an idea forward. These drawings are generally informal and speculative; printmaking for me is more considered and planned. If drawing can be seen as preparation and warming up for a game, printmaking can be seen as the game itself and once started I would try to take it to a hopefully successful conclusion. That said, my inclination is to edit out any sense of there being a correlation between gesture and emotion. I want something more exact and so the kind of drawing I use for the print changes, becomes tighter and hopefully more precise. Much of my print work is concerned with bringing together the languages of drawing and photography, and it has been through the computer that I can work on both simultaneously. The computer also helps me avoid florid strokes and unnecessary marks.2

Christopher Le Brun’s printmaking takes place in intense bursts of activity as his two projects: 50 Etchings (1991) and (2005) attest. An influential painter from the 1970s, and now the president of the Royal Academy, London, Le Brun is interested in the history of British art, but observes that national identity has never been a strong force in its visual arts. It was when he was living in Berlin for a year in the late 80s, that he met artists including Baselitz and Anselm Kiefer. He was interested by the relationship that German artists had with national identity. In his own work he draws on the literary imagery of John Keats, William Blake, Thomas Malory and John Bunyan. Edward Burne-Jones (1833-98) is a seminal figure for Le Brun, whom he considers as a proto-surrealist. In his own painting, Le Brun’s imagery hovers between the figurative and abstraction. His enigmatic archetypal forms (horse, branch, shield, tree, tower) carry equal weight to the formal language employed. There is a constant interrogation of painting itself, yet the works can be seen to occupy an awkward position in relation to the contemporary. Two ambitious etching projects seem simultaneously anachronistic and completely natural for Le Brun. Made in 1991, 50 etchings combines formal exploration of the picture plane, a decamping from the large painting studio (light, scale of stroke, colour) to an intimate poetic activity; the imagery in the etchings is a distillation of the painter’s oeuvre in a systematic and elegiac form. Surface pattern, pleasure in the creation of crosshatched surfaces, glorious abstraction, the emergence of figures from a Whistlerian fog, figures that dance and push against the picture plane. It is one of the finest bodies of graphic work produced using a full range of methods: thick velvety softground lines, open bite, aquatint underpinned by the immediacy and sureness of drawing. Drawing and printmaking for Le Brun can be seen as one and the same activity.

Josiah Spode perfected techniques for the transference of engraved designs on to china in the 18th century. Following a residency at the Spode factory, Charlotte Hodes, who trained in printmaking at the Slade in the 1970s, applies the printmaking/transfer methods in 3D, using a combination of collage (“drawing with a knife”) to create elaborate pottery works that seek to interrogate design principles from an irreverent feminist standpoint.3

Grayson Perry also uses transfer methods for his unique pottery urns, combining the drawn line, which he applies directly to the surface of the pot, with traditional methods of transferring design from engraving to china surface. He also makes iconic etchings, not by drawing directly on to the plate but with a Rapidograph pen on to acetate that is then (using photo-etching methods) transferred to the metal plate. Drawing in ink on acetate is practical for Perry and more portable and fluid than using an etching tool on metal.4 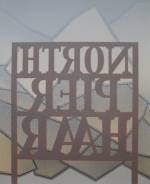 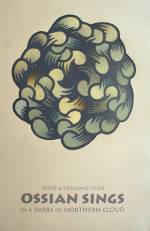 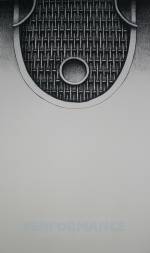 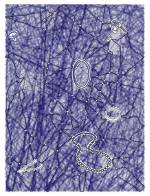 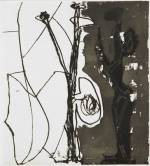 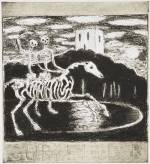 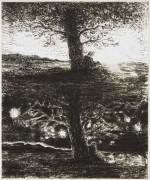 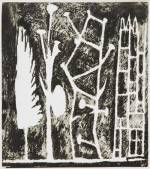