Arthur Watson: ‘Central to the organisation of the show was that work would be presented as it would have been when first made or acquired’

Arthur Watson: ‘Central to the organisation of the show was that work would be presented as it would have been when first made or acquired’

The president of the Royal Scottish Academy discusses Ages of Wonder: Scotland’s Art 1540 to Now, an ambitious and exciting exhibition that was more than three years in the making 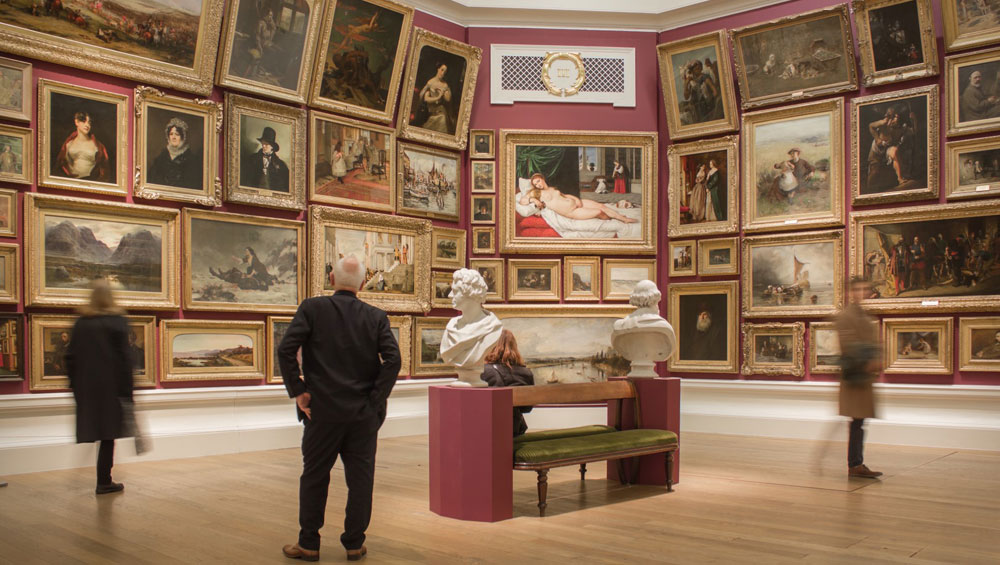 The National Galleries of Scotland (NGS) and the Royal Scottish Academy (RSA) have collaborated to organise a spectacular new exhibition. Ages of Wonder: Scotland’s Art 1540 to Now, at the Scottish National Gallery in Edinburgh, is the largest exhibition of the RSA’s highly significant collection since its formation in 1826. It is the first show to occupy the entire RSA building and has been more than three years in the making.

Surveying almost 500 years of art, the exhibition brings many of the works that were transferred by parliamentary order in 1910 to the NGS from the RSA together with a selection of those that remained in the RSA’s collection, as well as works it has acquired since then. In scale and significance, it is an ambitious and exciting exhibition and can be experienced on numerous levels. 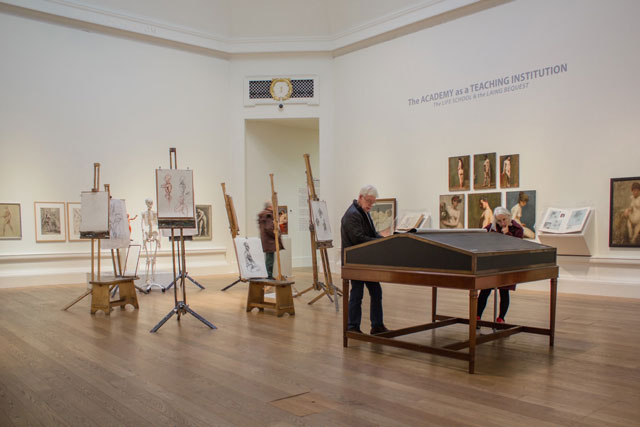 Two publications, a catalogue and a book, accompany the show, both edited by Tom Normand with broad-ranging, scholarly essays on all aspects of the Academy: its history, the relationship with other institutions, the important role it has played in education, the architecture of the building and the circumstances through which it was first created in the early-19th century and the history of photography, through the 20th century and the reinvigorated role it plays in the present day. Normand asserts: “For nearly 200 years, the Royal Scottish Academy of Art and Architecture has been a guardian of the visual arts in Scotland.”

The two institutions have worked together for 150 years, in which time they have inhabited one building, relocated to a neighbouring building, and now co-habit the northern of the two temples on Edinburgh’s Mound. Theirs is an interesting relationship, at times fraught and often difficult. Where the National Gallery receives government funding, the RSA is independent, reliant on endowments and earnings.

The president of the RSA, Arthur Watson, who has worked on Ages of Wonder for the past three-and-a-half years, describes the preparation of an exhibition on such a scale as “in equal parts daunting and exhilarating”. The introduction to the exhibition catalogue by Watson and curator Sandy Wood states: “The two collections share a close identity through the artists they represent and also through a momentous transfer of work in 1910, under the presidency of James Guthrie. This transfer, of key Scottish and European old master work, strengthened the foundations of today’s National Collection. It was this transfer that first inspired Ages of Wonder [and is] celebrated in the central gallery, where some of the stars of both collections share the same platform for the first time in over 100 years.”

Janet McKenzie: How different do you think an exhibition will be that has been curated by artists as opposed to curators?

Arthur Watson: Sometimes there seems to be little difference because so many artists of a certain generation are now so in thrall to curators. And their work can be seen as a form of curating. I’m interested in engaging with collections, but with this particular exhibition is not just about whether it is an artist curating because you can have an artist curating and it is still the same collection that has been built up through connoisseurship, by museum collectors over several generations. Artists not curators have built up the RSA collection, like those of the Royal Academy, London, the Royal Hibernian Academy, Dublin, and many European academies. It has a different feel and focus. Most of the RSA collection comprises the works of art that each academician deposits as representative of their practice, so it is the artist choosing what they want to be represented by. Ages of Wonder is characterised, too, by the fact that another artist has chosen which works to exhibit. This process gives it a totally different flavour. Most museum collections might bring work together work from a 200-300 year period, but it has been collected retrospectively so was not contemporary art at the point of being acquired. Probably 80% of the work in the RSA collection was brought into the collection as contemporary work. It may be 150 years old, but it was brought in to the collection as a contemporary piece. Also, the artist’s eye is very different from that of the curator’s. 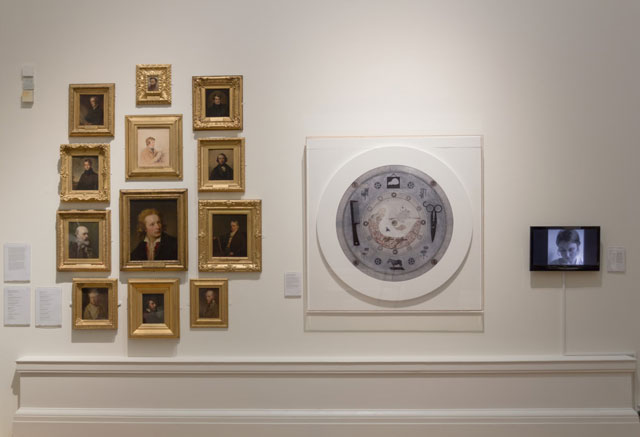 The difference between somebody who has studied art history, at the Courtauld Institute or somewhere similar, is significant; art historians trained through the university system can offer a very detailed knowledge of history, of the context the work has been made in, but they do not have an artist’s visual training. They tend to present work in a conventional way, where artists will always see the material they are working with as another way of extending their possibilities. They will, as a consequence, display work in a different way.

JMcK: Ages of Wonder can be experienced like a series of separate exhibitions that are connected in manifold subtle ways. Out of all the different galleries, which do you feel most connected to?

AW: Probably all of the rooms and, although I am slightly more distanced from the Victorian room, the concept of hanging the 19th-century works as they were hung then was my idea. The hang took weeks to plan and was enabled by using computer-aided design software by Helen Wood, the architect wife of the current curator of collections at the Academy, Sandy Wood. He remeasured all the works, because everything is catalogued by canvas size, and in such a complex hang the frame size is critical. As in Victorian times, there was no notion of context, just getting them to fit on the wall.

AW: It is an amazing installation and it was great to see it going up, with a time-lapse camera documenting it. The exhibition is huge, more than 500 works ranging in size from 19th-century paintings that are 20 feet wide to pieces that can be held in your hand. 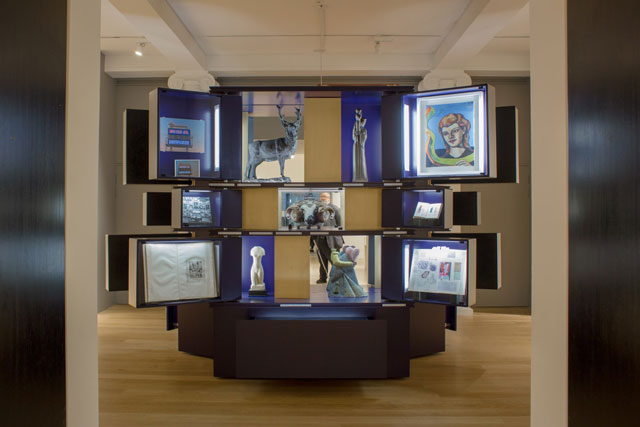 JMcK: The commissioning of a Wunderkammer display cabinet by architect Richard Murphy has enabled the rich contents of the Academy’s library to be viewed. The digitalised books (where it is possible to turn the pages) are integrated seamlessly with objets d’art. An elaborate ram’s head next to a digital piece might have been incongruous, but it is beautifully presented as a cabinet of curiosities.

AW: Richard Murphy’s design gave us the means of displaying items that were perhaps never expected to be viewed by the public. It’s challenging for the rare books to be exhibited outside the library. And that is based on the reader or artist knowing what it is they want to look at or study. All that material stays under the surface, whether it’s sculptural maquettes, institutional ephemera or books open within glazed drawers that can then be examined on the page-turner screen. Museums Galleries Scotland’s very generous funding of the exhibition enabled us to digitise the entire library catalogue.

JMcK: So there are manifold subtexts that the extensive catalogue essays go a long way to explain?

AW: Many threads run through it. In that it is a project involving two institutions, with numerous individuals, working collaboratively within the whole exhibition. There is only one work in the exhibition that does not belong, and has never belonged, to the RSA (before the transfer of works was made in 1910) and it is a little painting in the bottom left of the Victorian gallery by an unknown artist. The poignancy of The Interior of the National Gallery of Scotland (c1867-77) lies in the fact that it includes some of the works that are on show 150 years later in Ages of Wonder.

We were working on several premises – one being that Ages of Wonder can be experienced as a series of one-room exhibitions. You can start anywhere. The idea of having three galleries, which would cover work from three centuries and that that work would be presented as it would have been when first made or acquired was central to the organisation of the show. The Victorian gallery with 91 works has a dark-red background, and is next to a gallery with the work of just seven artists, very pared back, one or two artists per wall. The 20th-century gallery is double hung, showing both painting and sculpture.

In the Victorian gallery, it is all men, yet by the time you get to the 20th-century gallery there are numerous female artists represented: Anne Redpath, Joyce Cairns, Barbara Rae, Frances Walker, Sylvia Wishart. By the time you get to the contemporary section, there is a reasonable balance. We did not start off thinking about the gender balance, but the selection process naturally reflected the change. There are still more men than women, but the balance is getting closer each year.

The other key thing was to try to emphasise the fact that the Academy is a body of working artists. In the same way that the Church is a congregation of believers, or Marx defines the state as a body of armed men, then academies are living bodies of practising artists and architects.

JMcK: There is a sense at the RSA that technical virtuosity can be found in abundance, a strong emphasis on technique, precision, skill, in the same way that the Scots are known historically for placing a high value on education. What does Ages of Wonder say about Scotland?

AW: That it is different from anywhere else. That it can be unashamedly nationalistic, such as the engravings of Bonnie Prince Charlie by Frederick Bacon after the Thomas Duncan work Prince Charles Edward and the Highlanders Entering Edinburgh after the Battle of Preston[pans], September 22nd 1745 – and the Henry Thomas Ryall (after Duncan, 1746) Prince Charles Edward Asleep In one of the Hiding Places after the Battle of Culloden Protected by Flora Macdonald and the Outlawed Highlanders Who are Alarmed on Their Watch published in 1846, 100 years after the actual events of 1745-46.

But the adjacent gallery features a film made by Alexander and Susan Maris in response to Rory McEwan’s film of Joseph Beuys’s journey to Rannoch Moor with Richard Demarco in 1970.

• Ages of Wonder: Scotland's Art 1540 to Now is at the Scottish National Gallery, The Mound, Edinburgh, until 7 January 2018.