Frances Walker: ‘For me, art is all about being able to communicate with someone I haven’t even met’

Frances Walker: ‘For me, art is all about being able to communicate with someone I haven’t even met’

The Scottish painter Frances Walker, now in her 80s, talks about her time as an art teacher, her fascination with Pieter Bruegel, and visiting Antarctica

Frances Walker, now in her mid-80s, was in 2014 awarded the prestigious Churchill Award for art, alongside Dame Judi Dench for drama and Michael Morpurgo for literature. David Hockney was a recipient of the award for art in 2012.

Janet McKenzie: Congratulations on your recent honour and your recent solo exhibition, Coastlines, at Tatha Gallery in Newport-on-Tay (27 September – 25 October 2014). Were you surprised to receive this great recognition?

Frances Walker: When you get to my stage in life, for most people, life diminishes. Having the award, the recent exhibition at Tatha Gallery, with good press, and the book to mark my 80th birthday (Frances Walker: Place Observed in Solitude, 2009 – published in conjunction with an exhibition of the same name at Aberdeen Art Gallery),1 has been a very happy experience. I still wish I were 20 or 30 years younger; there are so many things I would love to do, and there are things that I will never see. I have many younger friends. At this stage, more seems to be happening than it did in my 40s and 50s. I had to do full-time teaching; I am of my era as a child during the second world war. We fought for things to happen that succeeding generations now have.

JMcK: You have been an important teacher and have taught most of the best artists in Scotland, including Arthur Watson, Will Maclean, Alan Robb, Joyce Cairns and Alexander Fraser.

FW: They have become my friends.

JMcK: Your images and landscapes have a hard-edge appearance, and it has been suggested that there are historic roots for this quality in the north-east of Scotland. Are there specific influences on your work?

FW: I find it very difficult to talk about influences. I was taught by [the Scottish artist] WG Gillies [1898-1973] and always admired his attitude of “get up and go outside to paint the landscape”. I admired his sense of design, too. His wasn’t a photographic replication of the range and change in landscape, though some works were more atmospheric than others. I have always been very interested in the work of Pieter Bruegel the Elder, especially his series of painting representing the seasons, and can recall the exceptional experience of going to Vienna and the Albertina Museum, some years after the war, on a travelling scholarship and going into the gallery where the shutters were still closed. There were just one or two attendants; we could actually touch the paintings, and look closely at the tiny detail, the thin glazes on the wood. The mood and the narrative behind Bruegel’s work was fascinating, the depth to it. I also found the way Japanese and Chinese scrolls were unfolded to be fascinating, as if you were walking through the landscape. These are the kind of things that impressed me.

JMcK: You spent your early years as a schoolteacher in the Outer Hebrides.

FW: The first job I applied for was on Shetland, then the Western Isles, travelling to all the small schools, teaching children from the age of five to 15. After that, the pupils would move to Portree on the Isle of Skye or to Inverness if they wanted to do their Highers. There were tidal islands that contributed to an interesting experience, something only a young person could do. Then I was offered a job at Gray’s School of Art in Aberdeen [she was appointed a lecturer in drawing and painting in 1958 and stayed until 1985], which I took, although I had wanted to go to Canada where a lot of interesting work was being done at that time in printmaking with the indigenous population there.

JMcK: At the Churchill Award ceremony, you spoke at length to Martin Rees, Astronomer Royal, who received the Churchill Award for Science and Environment, and your brother is a professor of astronomy at the University of British Colombia. I find it interesting that your landscape painting employs an extremely analytical approach, and that your brother is a world-class scientist. It is interesting that, having grown up with scientist siblings, as I did, you have created a lifetime’s body of work in this way. Landscape painting, of course, is a means of exploring human existence within the world.

FW: Perhaps you can see why I saw so much in Bruegel. And the way he chose to portray the seasons. They tend to be people going about their business in the landscape. We are all passing, all footsteps in the sand … You have picked up on me analysing the landscape. When we are moving within the landscape, we are reading it: it is telling us things from those who have lived here before.

JMcK: When I first saw your work, quite some time after moving to Scotland, I was very pleased that you were a woman, and I recall thinking: “This person is telling me what being in the Outer Hebrides is really like.” You had captured something of how it felt to travel mentally over the seas and within a landscape that evoked memories of one’s forebears. I remember being on the water, and as if there was indeed a profound inherited memory. I thought your works were just the most wonderful images.

FW: This is what it is all about: to be able to communicate with someone I haven’t even met. For me, that is what making art is all about. I am not making works to sell, that is a byproduct. I’m not doing them to impress people – although the fact that, if anything survives, there are eyes that are not yet born who will see them and be reached without words – the experience that you have described –pleases me, because I have made communication over the years to people who do not even speak the same language.

I did not grow up there, but went out of choice. Scotland is such a small country, but it is so diverse: from the northern islands, to the Western Isles, to the Highlands, to Fife, to the industrialised central belt. It is so diverse.

JMcK: Don’t you think there’s a vastness although it is small?

FW: Yes there is. Back in the 70s, I got a Gillies award and chose to travel to Finland and, although the population size is about the same as Scotland’s, they have their own language that is not spoken anywhere else. The country is so much bigger geographically, and although the trees get smaller the further north you travel, there is nothing like the diversity of Scotland. Finland had always intrigued me as a place because of the quality of architecture and design, and I thought there were characteristics in common with the Scots and Finns. For such a small community of people, they had to deal with the encroachment of Russian borders at the end of the second world war. I chose to go by boat because that is how the original habitants travelled, and that was mind-boggling. Coming back through the Kiel Canal [in northern Germany] was like travelling on a cargo boat through a Bruegel painting.

JMcK: What prompted you to travel to Antarctica as recently as 2007?

FW: I like the extreme ends of the world. I don’t like insects and wild animals, so am not interested in travelling to the tropics. I had been to Iceland, Alaska and Greenland already.  When I went to Greenland, I remember a wonderful day in Disko Bay on a rust bucket of a cruiser. I couldn’t go below deck at all, it was marvellous. The weather is extremely variable, but on the day I was there it was glittering. I did a work entitled Wonderful Day in Disko Bay. I had the chance to go to Antarctica and travelled via Buenos Aires, Elephant Island, South Georgia and the Falklands. It was the end of the Antarctic summer and the last trip for the season. I loved it. When we got back, I just wanted to turn around and do it again.

JMcK: Your interrogation of the landscape would have been necessary in the Antarctic, being so different and predominantly white!

FW: It is white and turquoise and the sea can be dramatic. There is, in fact, plenty of variation. There are places where no human foot has stepped, and others where there are the bodies of those who have perished there, frozen into the glaciers. Dundee is the place to start an interest in the Antarctic; it is where the Discovery, which took Sir Ernest Shackleton to the Antarctic in 1901, was built.

JMcK: The Scots are historically adventurers and explorers who, in the 19th century, set forth to discover other parts of the world. You seem to have absorbed that characteristic tendency in your lifetime as an artist.

FW: In a way, yes. I chose to travel by boat, which I find a very genuine way of travel. By boat our forebears were connected to other islands, and in turn other parts of their world. Theirs was a small but rich community defined by the sea as fishermen and as explorers.

JMcK: Thank you so much. 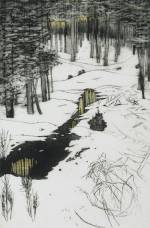 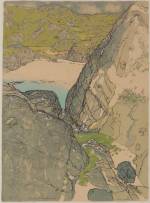