A compact, but rich exhibition at the National Gallery finds moral transgression at the core of western art history 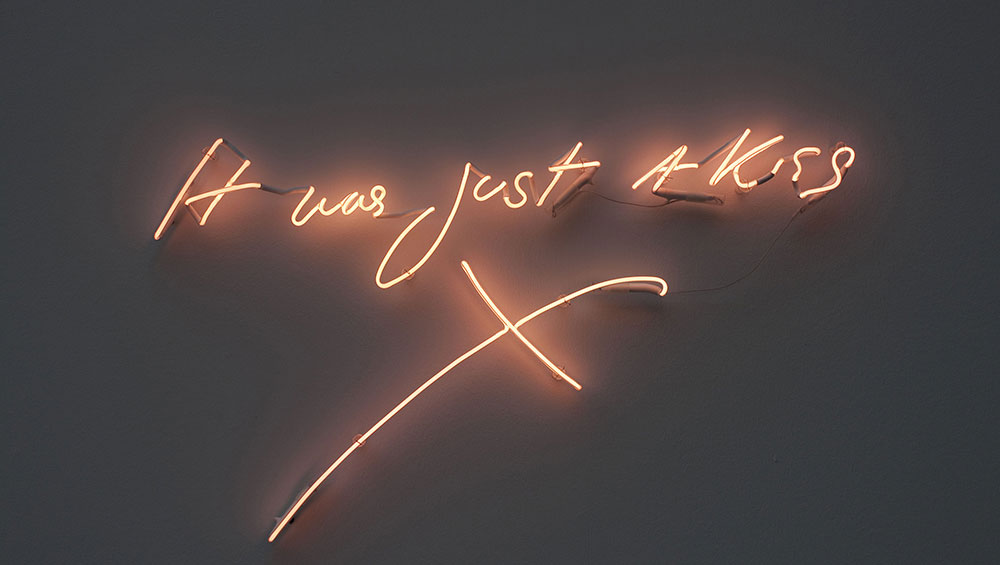 An Allegory with Venus and Cupid (c1545), by the mannerist painter Agnolo Bronzino, is one of the National Gallery’s most elusive holdings. In its foreground, the goddess of love and her son engage in a kiss that seems more than familial (“the only real kiss ever represented in a picture,” opined one Iris Murdoch character). Behind them stand five figures who remain slippery. Art historians believe, with good evidence, that the bearded man in the top right is Time and the rose-throwing putto beneath him is Folly. The identities of the other three characters – a screaming old woman clutching her hair, a man with a mask-like visage, and a chimeric part-girl part-serpent – are still uncertain, almost five centuries after Bronzino concocted them. 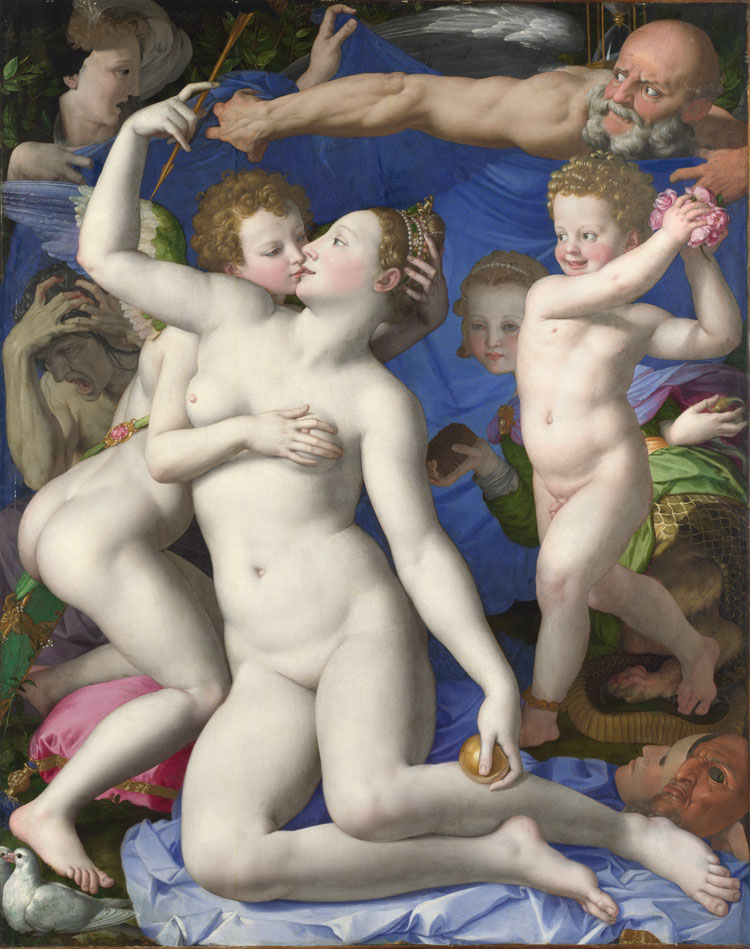 One thing that successive generations have agreed on is that the Allegory possessed a certain obscenity. In Louis XIV’s court, not a place known for its puritanical mores, Venus was covered up with underwear. Its last private owner, a Monsieur Beaucousin, hid the entire painting behind a veil. And Sir Charles Eastlake, appointed the National Gallery’s first director in 1855, ordered that the tongues and nipples be painted over, then consigned it to his list of “superfluous pictures” to be exiled to Edinburgh. Bronzino’s sexually explicit imagery made it transgressive, an inducement to sin. Not until 1958 was it restored to its original state. 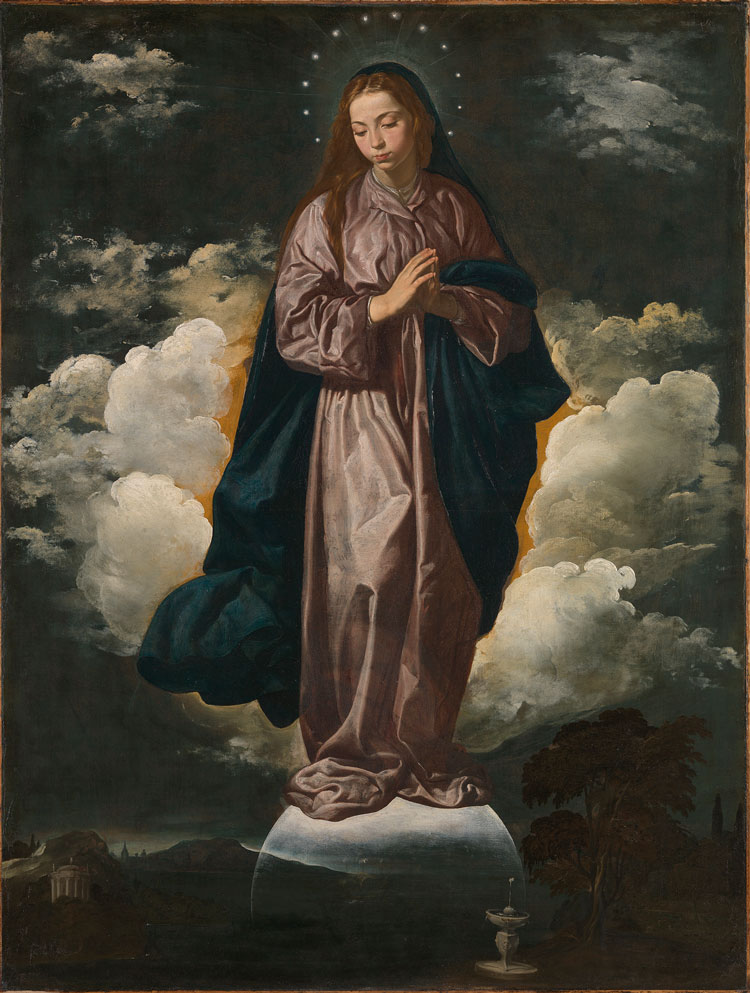 Bronzino’s masterpiece now hangs at the centre of Sin, a compact exhibition at the National Gallery devoted to the theme of moral transgression, particularly against Christianity’s divine law. Sin includes 14 largely small-scale artworks, half from the museum’s collections and half on loan. This might seem a paltry assortment, given the enormity of the topic, but the selection of works is judicious and broad. Velázquez’s surpassingly graceful The Immaculate Conception (1618-19) shares space with William Holman Hunt’s near-psychedelic The Scapegoat (1854-55). Positioned as an optional side-route partway through the museum’s pandemic-occasioned one-way system, Sin provides an interpretive lens for the collection as a whole. 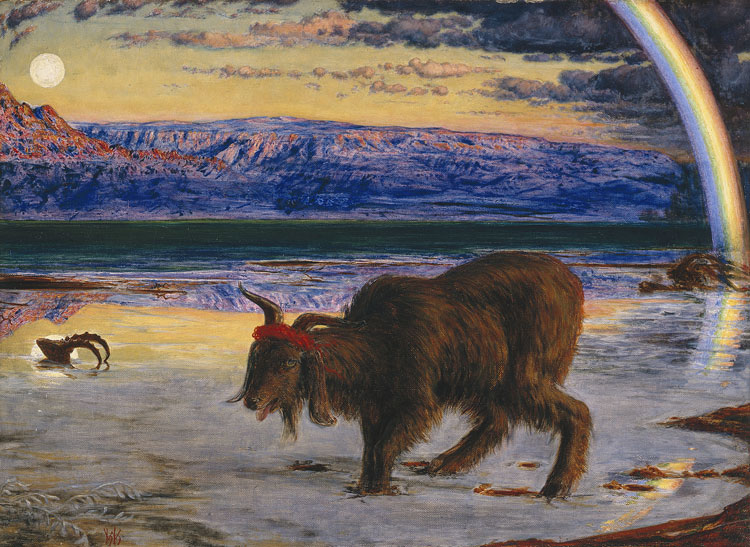 Once you start looking for sin in western art, you see its traces everywhere. In depicting the life of Christ and those of the saints, the devotional art of the middle ages extolled the rewards of those who chose virtue over vice. But it was in the Renaissance, when the range of stories depicted by artists broadened outside scripture and hagiography, that sin and sinners were thrust front and centre. The earliest work in Sin, The Mass of Saint Giles (c1500) by an anonymous Franco-Flemish master, sees the Holy Roman Emperor Charlemagne himself kneel before the altar for absolution. 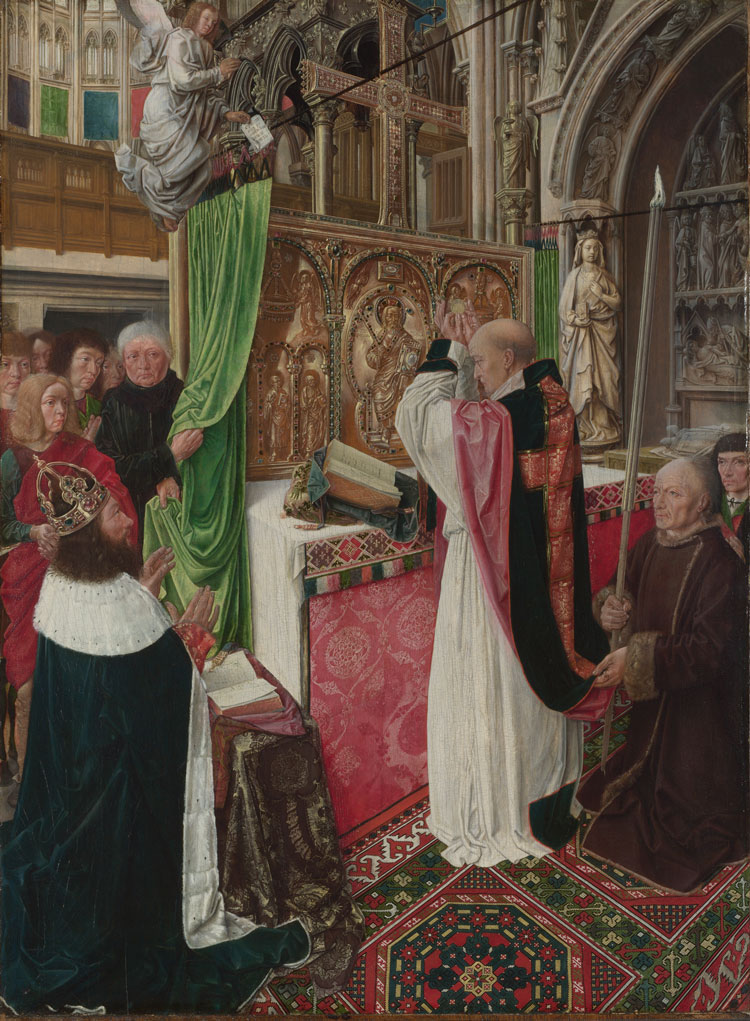 In his gargantuan tome The City of God (426), Saint Augustine spun some meagre lines of Saint Paul into the doctrine of original sin. When Adam ate the apple, humanity became for ever corrupted, unable to shake off its proclivity for evil. In Jan Brueghel the Elder’s The Garden of Eden (1613), on long-term loan to the National Gallery, we see a minuscule Adam and Eve caught in the act of sin, diminished as if to emphasise the smallness of the act that would condemn the entire human race. Brueghel’s characteristic menagerie – leopards, camels, even an ostrich – seem to stare out in askance. Look, they seem to say, at what you and your ancestors have done. 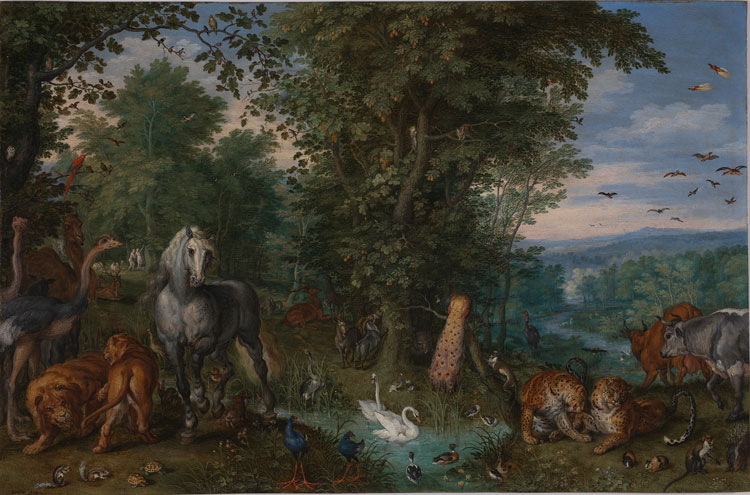 With its lush, exotic fauna and flora – not for nothing was Jan known as “Paradise Brueghel” – his Eden has a seductive pull even as it depicts the defining crime of human history. Sin and seductiveness hew even closer together in the work of Lucas Cranach the Elder, who painted the progenitor pair at least 50 times. In the Courtauld’s Adam and Eve (1526), he captures Eve handing the forbidden apple to her partner, who scratches his head in thought. Cranach highlights sin’s intentionality: it was Adam’s decision to take a bite, not the bite itself, that wreaked doom. 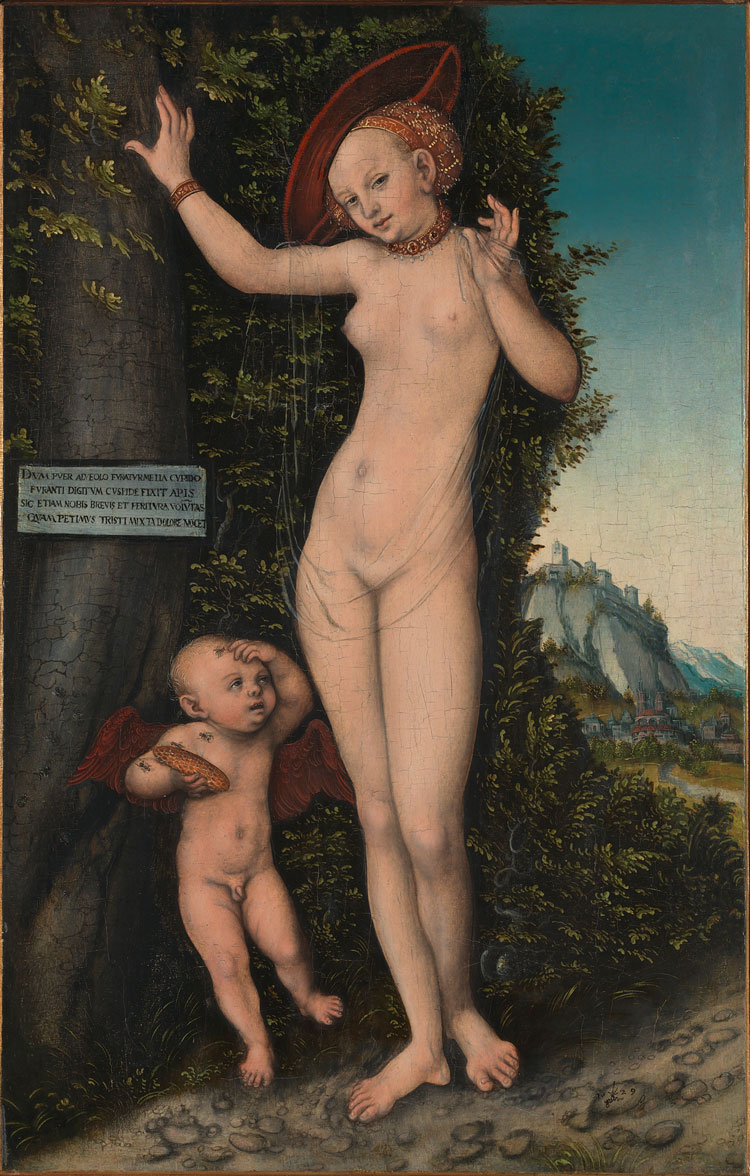 Yet while Cranach’s painting may impart a moral message to its beholders, it is also an indubitably erotic work. Adam and Eve are handsome, delicately figured nudes (a conveniently placed plant protects their modesty). Is Cranach’s painting fuelling lust even as he bemoans original sin? Notably, Cranach was famous in his lifetime for his numerous depictions of Venus, several of which bear a remarkable similarly to his Eves. Painting can both fan and quell the fires of sin. Cranach worked in Lutheran Saxony, and Luther saw mankind as perpetually sinning. Perhaps the artist’s ambivalent relationship to vice is an acknowledgment of its persistence. Another choice loan from the Courtauld, Pieter Bruegel the Elder’s Christ and the Woman taken in Adultery (1565), shows Christ writing his dictum: “Let anyone among you who is without sin be the first to throw a stone at her.” If everyone is a sinner, perhaps art should reflect that? 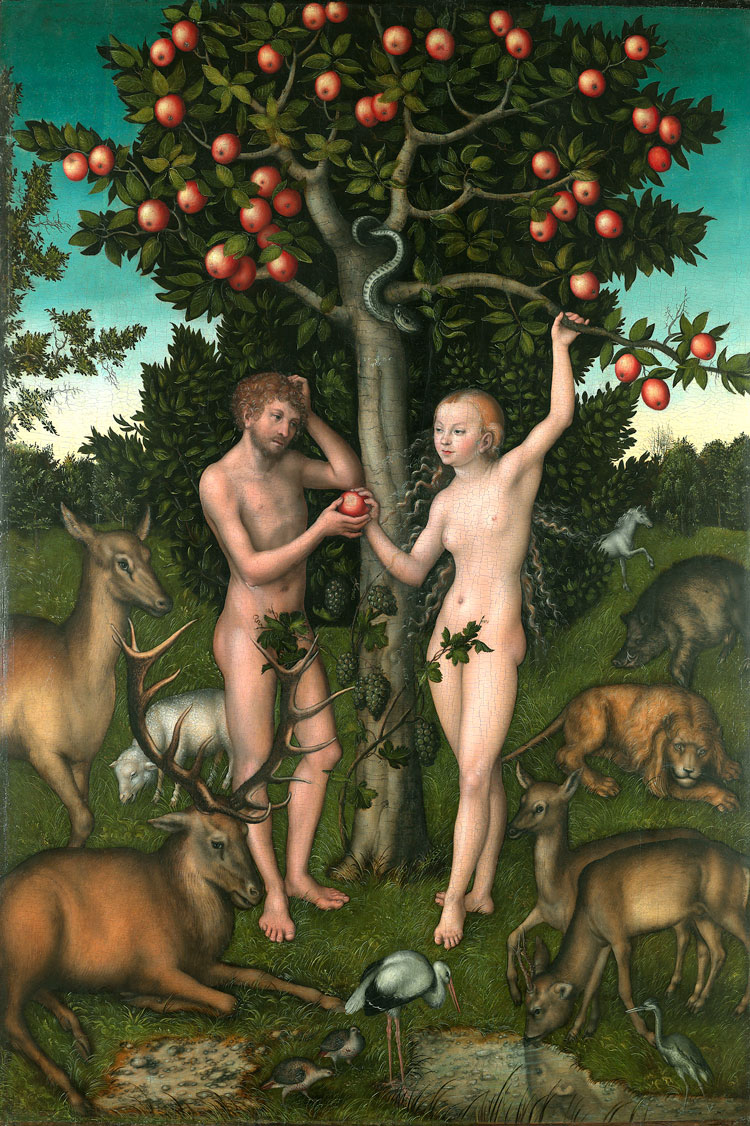 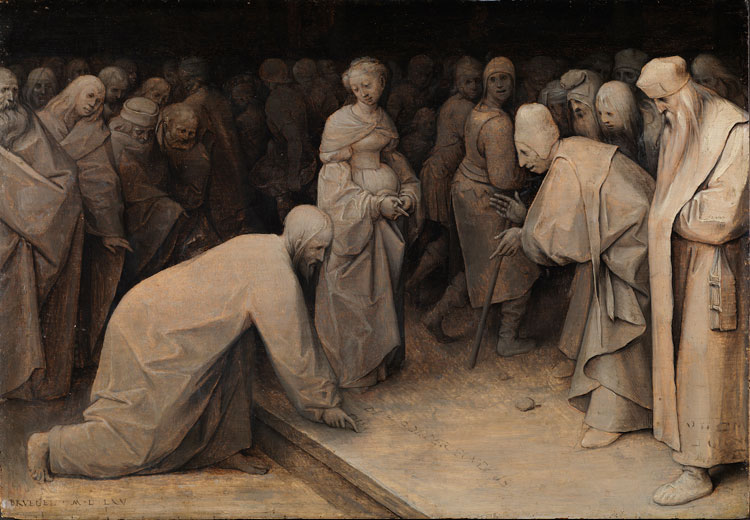 Earlier in his career, Pieter Bruegel the Elder had produced bustling prints of the Seven Deadly Sins, which abound with ingenious vignettes despite their ostensibly didactic function. Sin brings together two later paintings from this tradition. In The Effects of Intemperance (c1663-5), Jan Steen captures vice as a chain reaction: as the mother lies in drunken slumber, her brood runs riot. One daughter hands wine to a parrot, a symbol of imitation, while a son pickpockets his own mother. William Hogarth’s The Tête à Tête (c1743), from his series Marriage A-la-Mode, captures a dissolute household in a dozen small details: the husband’s syphilitic spots, a pile of unpaid bills, the merest glimpse of a titillating painting in the background. In both of these paintings, moral instruction is a spur for the depiction of everyday life. 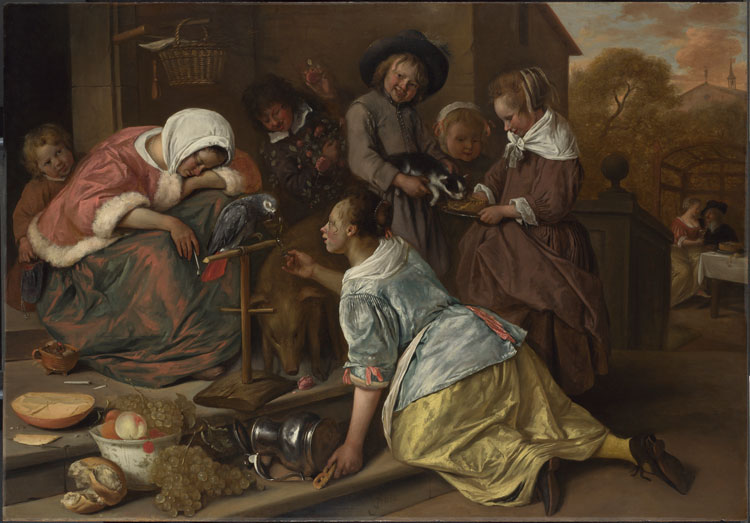 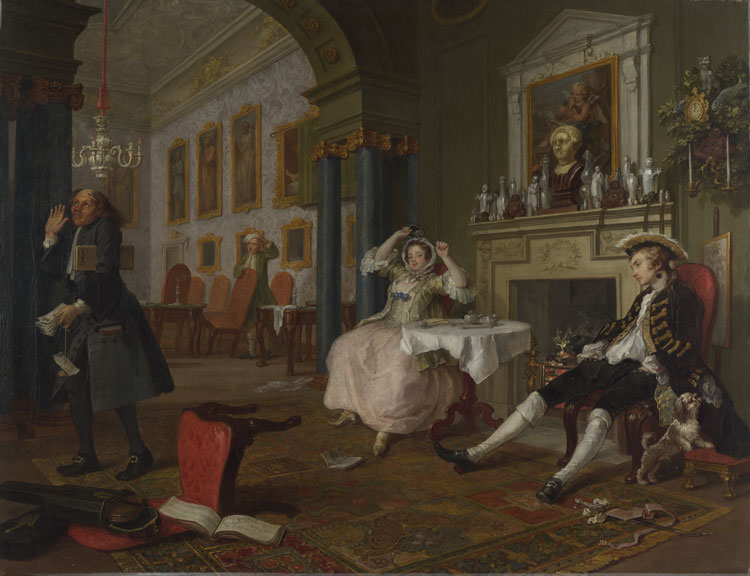 Sin is completed by work from a trio of contemporary artists. Two late works by Andy Warhol, a lifelong closeted Catholic, transpose the breathless signs of kerbside preachers into paint and silkscreen. In an exhibition that shows how sin insinuates itself into all sorts of art, the bluntness of these mottos – “Repent”, reads one, “and Sin No More!” – is a bracing reminder of how the idea of sin still guides lives. Tracey Emin’s It Was Just a Kiss (2010), one of her neon signs, might be a descendent of the Jan Brueghel’s Eden, where a tiny trip triggers a mighty fall. 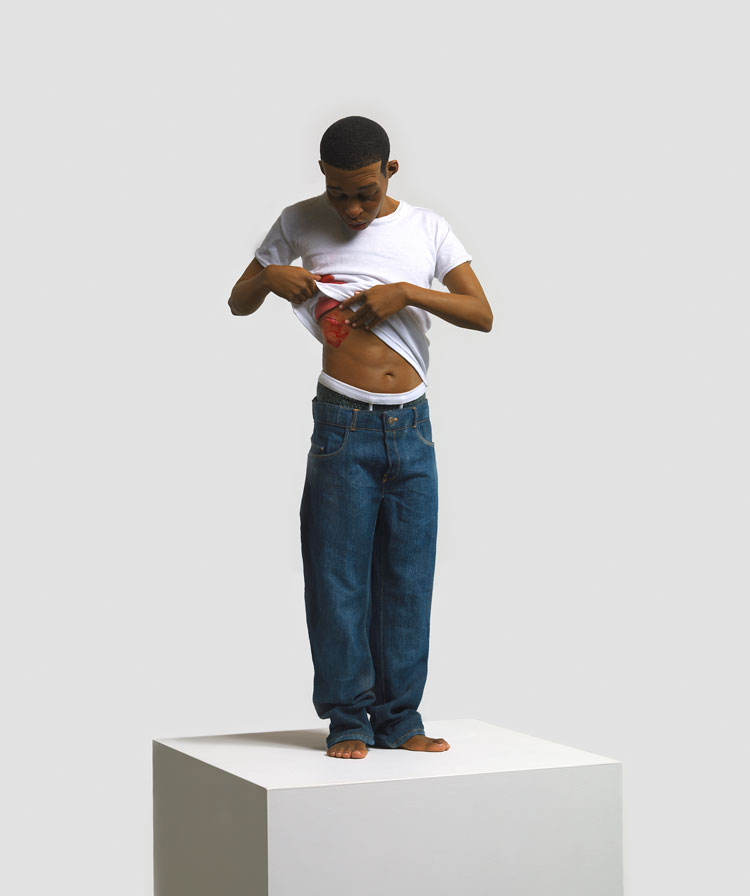 But it is former National Gallery artist-in-residence Ron Mueck’s Youth (2009) that provides the most fitting capstone. Mueck’s young man, a victim of violence, looks down quizzically at a wound in his chest. Positioned where northern Renaissance artists often placed Christ’s lancing at the hands of Longinus, it offers itself as a contemporary Passion. Is he the saviour who can absolve our sins? Is he a scapegoat, burdened with our vices? Or is he just a youth in a (potentially fatal) spot of bother? Like Cranach and the Brueghels before him, Mueck signals that moral transgressions are all-too human. 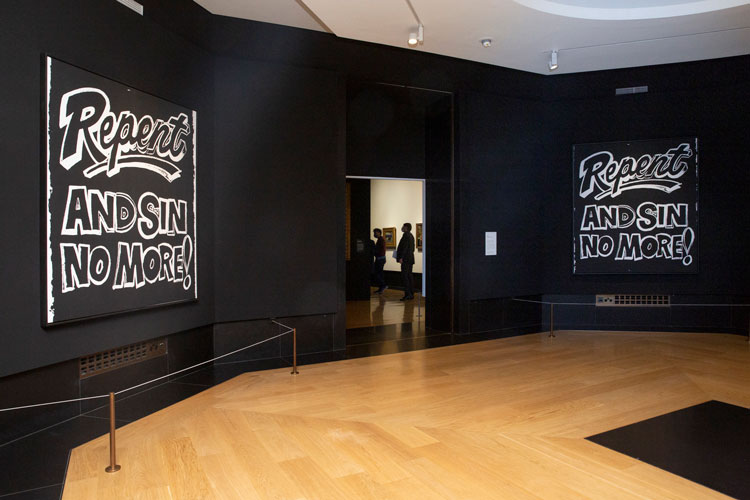 Installation view of Sin exhibition at the National Gallery © The National Gallery, London showing Andy Warhol, Repent and Sin No More!, 1985-86. Acrylic paint and silkscreen on 2 canvases, 203.4 × 178.1 × 3.3 cm. ARTIST ROOMS: Tate and National Galleries of Scotland. Acquired jointly through The d'Offay Donation with assistance from the National Heritage Memorial Fund and the Art Fund 2008. © 2020 The Andy Warhol Foundation for the Visual Arts, Inc. / DACS, London.