Jockum Nordström: ‘There’s a self-portrait in every single thing I do. Even if I make a tree or a sex-scene, I can play the both of them’

Jockum Nordström: ‘There’s a self-portrait in every single thing I do. Even if I make a tree or a sex-scene, I can play the both of them’

Having travelled from the island of Gotland where his latest solo exhibition was composed, Swedish artist Jockum Nordström talks about his creative process, his communication with the dead, and the problem of exterior definition

As antithetical as they often appear, there is a fine line dividing surrealism and realism. If anything, they are siblings. One may sit in a library with his head buried in a book while the other shouts from the balcony, deploring novel after novel, but they remain children of the same parents, children of the same reality. Swedish artist Jockum Nordström (b1963) is very aware of this. Coinciding with the republishing of Who is Sleeping on My Pillow, a 2009 collaboration with his wife Karin Mamma Andersson, Nordström’s latest solo exhibition, For the Insects and the Hounds, showing at the David Zwirner Gallery, London, introduces horsemen, hounds, ghosts, Grecian and suburban Swedish architecture, humanised wolves, gothic madonnas and barefaced scenes of a pornographic level. But while the distorted collages, graphite drawings and miniature sculptures conjure a profound world of make-believe, they concurrently address certain inherently human and undeniably real concepts: relationships, hierarchies of power, the process of maturity and animalistic lust.

The question remains, then – if they are founded in these pockets of human consciousness, are Nordström’s disparate frames of fantasy works of surrealism or realism, or do they embrace both? Ultimately, it is a question with a wholly subjective answer, and a question that can be reworded in a more direct manner: what do you want them to be?

Harry Thorne: Tell me about the process behind For the Insects and the Hounds. You were marooned on Gotland?

Jockum Nordström: I was in the middle of the island, not too close to the sea, where the soil is not too deep, like meadows. I really wanted to make some big collages for [the David Zwirner Gallery]. I want to have a dialogue in the studio with myself and even between the pictures. It’s much easier if you have 10 or five: when you have nothing at the beginning, then it’s always hard. It goes very slowly and then it goes faster and faster.

HT: You have said that your 3D works act as something of a warm-up. Was this case with For the Insects and the Hounds?

JN: Yes, first is the 3D, and it’s night work sometimes. You sit in the nighttime and glue and have a feeling for this material. Then, after a while, you’ll be a little fed up with this, and you’ll go out and start.

HT: That’s when you know you can move on?

JN: Yes. Now I have a feeling that if I go to my studio when I go home, I’m going to make sculptures. It’s relaxing, it’s not so important for me. It’s easy to go there. I always long to draw with graphite, but it’s not so easy for me any longer. I have done it so many times, so sometimes I’ll get a little bored quite quickly, but I’m always longing for the process. I love to be inside a drawing that I feel interested in – it’s the best feeling I know.

HT: Do you see yourself as an illustrator who makes collage and sculpture, or does it all combine?

JN: No, I always see myself making art, and sometimes I’m an illustrator. Even before, I always made my own stuff, but then I wanted money for rent and food so I illustrated things and made covers for books and worked for papers. I worked for a lot of different papers when I was young, and in a post office too.

HT: What did you do at the post office?

JN: I was a postman for three years, and then for eight years I worked in the office, checking the packages and stamping. It was always good people who worked there at that time. Maybe now it’s more like real work, but at that time if you were ready at around 11 [in the morning] then you could go home. It was perfect for musicians and artists.

HT: Is this the first time that you have cordoned yourself off, taking yourself away and becoming isolated on the island?

JN: No, it’s a part of my life. I have two children – they are big now – so when I was younger it was more about them. When the summer came, we went out to the countryside and I always had a good feeling with this. Sometimes we were away for three months. I think it’s good. You come down.

We bought a place, a really old place. The rain came through the roof, some windows were broken; from the beginning, it was really bad. I think it’s been 10 years now? So we have been there a lot, but now the studio is all ready and it’s much easier to be there and work. I have been isolated a lot of times, but this time it was more like a statement, a clear thing. I was alone a lot with the dog. It’s good – you go down inside yourself. Nature becomes very important in that time: the rain, the light, the seasons, it’s always changing. If you’re in the city, you miss everything. I like the birds a lot: the singing, how it looks. In the birds, you can really see the seasons, with the nests and the fighting for each other and the move back to Africa and the crows coming more and more. I love it.

HT: Is this where the title, For the Insects and the Hounds, came from? From your experience on the island?

JN: Yes, I think I made a lot of this for them, or for myself and for that world that surrounded me.

HT: You have said that you make a lot of work for the dead as well. Can you expand on that?

JN: We live in a time where you have a lot of books and you can see a lot of art. A hundred years ago, maybe, if you were an artist you just saw some piece of art or some exhibitions, but not like we can now. For me it’s very important, the dialogue with the dead people. Not the corpse, but the feeling of the time. You can see it. You can feel it. The history, it’s so clear. You see some pictures and you understand them and you have them like friends. When I make my own stuff, I think a lot about other artists and musicians and everything. You do it for people who are maybe going to be born. It’s the same to be not born and to be dead. You’re not here now and you can’t see.

JN: Exactly. It’s really contemporary to think in this way. Everything is like a stream together.

HT: The themes that you employ in order to communicate in this way – hounds, childhood memories, sexual desires – where do they come from? Is it the way you feel your ideas are best conveyed?

JN: I think it’s hard to find, exactly. There are a lot of crossroads in my head. I remember when I was younger and I was drawing a lot, it was another feeling, a more manic feeling. I was very close to my childhood: relationships, the suburb where I grew up, the architecture there. It was about me and my own ego-history in that time, now it’s more abstract, there’s more air in everything. It’s something else. I feel the colour is more important today than it was before, and maybe the story of what you see is not so important. It’s hard to put it in to words.

HT: Much of your work contains a sexual element. In pieces such as Spare Timeand Big Sister, sex appears as quite tense and uncomfortable, and it always seems to be women who are noticeably sexualised. Why is this?

JN: I think there’s a self-portrait in every single thing I do. Even if I make a tree or a sex scene, I can play the both of them. This guy [points at a graphite drawing], I know it’s me! The name of that is Ghost. I put a lot of feeling into everything, and I can’t say why it looks like that exactly. But I think contrast is very important in pictures, always. Sometimes it’s very important [that] the contrast is very, very sensitive, and sometimes it’s good that it’s strong.

HT: Your exhibition incorporates minimalist sculptures, animals and nudity, as well as religious iconography, graphite sketches and collage. Would you say that these visual contrasts make your work quite surrealist? Or would you say it’s closer to realism as it comes from your own thinking?

JN: It’s hard for me to say. When I was younger I felt myself a realist, always, but when I look at my old stuff I now see it’s really surrealistic. Then when I was really young, between 18 and 25, I was drawing a lot outside and I felt I was a realist. I never liked the surrealistic idea of art. I love a lot of the surrealistic artists, but for me they are realists sometimes.

HT: Many people seem to employ terms such as outsider art or folk art to describe your work. I initially agreed with this view, as I can perceive elements of both Jean Dubuffet and Alfred Wallis in your collages especially, but I can also discern LS Lowry-esque traits, and you couldn’t really call Lowry an outsider artist. I was wondering what you felt about these definitions, because they do seem to be applied fairly regularly?

JN: Good folk art is really, really good art, but there’s a lot of shit, too. It’s the same with modern galleries; modern art can be so boring. So, for me, the border is not so strict.

HT: It seems a lot of your work is a continuous process with no real start or end. It all becomes interlaced: one meets another, which forms another.

HT: And what will your response to For the Insects and the Hounds be? You seem to have both big and small, dark and light.

JN: Next time it’s going to be a reaction to this. One year ago, I really tried to make a lot of abstract ideas. I tried to find new colours, and everything failed in my mind. I had a good time, but it was just a lot of shit. A lot of the experience from that time is inside this show now. I can see it, so it was not a waste. It was a good time. 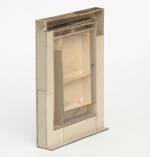 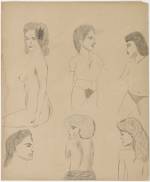 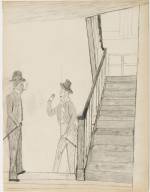 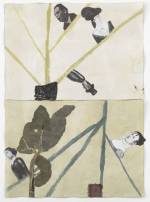 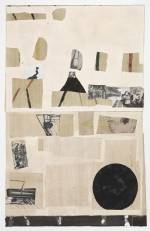 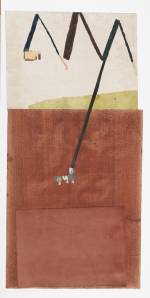 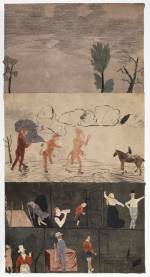