All I Have Learned and Forgotten Again

All I Have Learned and Forgotten Again

This major exhibition of works by the Swedish artist Jockum Nordström [born 1963] explores the breadth of his work in collage, graphite drawing and architectural sculptures from the 1990s until now. The title of the show, All I have Learned and Forgotten Again,evokes memories of school days and exams, cramming information that is never used, then lost. The work is heroic rather than defeatist, with teetering sculptures and intricate drawings. Nostalgia is not left at the door, as the exhibition unfolds like the pages of a mysterious fairy tale.

Last year, in collaboration with Joakim Åhlund, Nordström released an album, Paddan och Hunden, which translates as Toad and Dog. The album’s cover, a coloured pencil drawing, illustrates a jungle scene: a roaring lion surrounded by naked tribal women wielding spears. The drawing, I’m a Failure(2011), shares its title with one of the tracks, a pleasant hypnotic piece with the dulcet tones of the xylophone.

Surreal scenarios have a dream-like quality in Nordström’s work, with an instinctive naivety depicting folklore and fairy tales. Nineteenth-century upper-middle-class families are recurrent characters in his drawings and collages, examples of probity and restraint. Period costumes, top hats and tails, knee-breeches and frills adorn mysterious characters in ambiguous settings. There are suggestions of tall ships, horses and carriages, tweeting birds, sailing clippers and villas. Figures are active: playing guitar, walking a dog, dancing, conducting an orchestra, displaying overt sexual behaviour. These scenes are not dissimilar to the epic intricacies of Hieronymus Bosch’s The Garden of Earthly Delights(central panel of the triptych,1490).

As in Paul Noble’s Villa Joe, Front View (2005–6), once we scratch the surface of the densely intricate episodes, we see a far more sinister graphic narrative played out.  Similarly, they share in building vast architectural structures: with Nordström, this is most clearly demonstrated in models made from cardboard and old matchboxes. Shredded notebooks form the background in Loppspel/Tiddlywinks (2004), as figures pose on top of a cityscape; office buildings as rigidly ordered houses stretch into the distance.

Outside the gallery a vast glass vitrine contains the sweepings of Nordström’s studio floor; rejected watercolour figures and fragments displayed like historical artefacts.  This exhibition is like stumbling into a captivating lost archive of crumpled papers and stories from a time gone past.

Nordström, who currently lives and works in Stockholm, became known in Sweden for his series of children’s books about the character Sailorand his dog Pekkaand his illustrations for the newspaper Dagens Nyheter, for which he worked from 1997–9. He first exhibited in the United States at the Jack Hanley Gallery in San Francisco in 1999, and his reputation grew rapidly after his drawings were exhibited at Liste in Basel in 2000, selling out instantly to collectors including the Museum of Modern Art (MOMA) in New York. He joined the David Zwirner Gallery in New York shortly after. 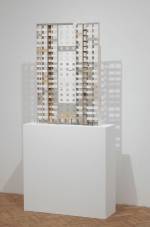