Choosing, cropping, conjoining and composing are the intangible creative tools with which German artist Hannah Höch (1889-1978) forged her impressive oeuvre between the early 1910s and the late 70s.

The Whitechapel Gallery has devoted its three main exhibition spaces to an exposition of the fascinating and intricate world that Höch cultivated in her collages – more than 100 works on paper that creatively embody the fluidity of her social, economic and artistic context. Höch’s materials are that context: clippings from magazines, newspapers, posters, books and journals, the stuff of modern communication plucked from the shop shelf and the cafe table and put to the service of what she termed “a new form of compressed utterance”.1

We first meet the agent of these utterances in the large photographic portrait that fronts the exhibition. Taken in 1926, at the height of her involvement with the avant garde, this image of Höch partly mimics her own practice of cutting and sticking: her short hair is cropped at an angle, suggesting an over-zealous episode with the scissors, and the photographic developing process has left an uneven surface of chemical smears that give her face a sewn-together look. Höch used this opposition between the definite and the blurred to distil the humour and sobriety of life into small-scale visual statements, but though playful, she did intend a higher purpose for these compositions: “I would like to blur the firm borders that we human beings … are inclined to erect around everything that is accessible to us. I want to show that small can be large, and large small, it is just the standpoint from which we judge that changes … I would like to help people experience a richer world so that they may feel more kindly towards the one we know.”2

Chronologically organised, most of the show is devoted to Höch’s early-to-middle career: her Dada pieces of the 20s and her prewar explorations of performance, femininity and exoticism. Before this, Höch had worked for a fashion publishing house and designed embroidery patterns, meanwhile trying her hand at linocut printing and constructivist experiments with shape and colour. Papillons is a 1917 linocut that shows Höch’s early passion for graphic design, specifically the flattening, layering and repeating of shapes on a surface. White Form (1919) is an exercise in composition that begins to show Höch’s preoccupation with combining fragmentation with wholeness. The slightly later New York (1920-21) sees Höch introducing the photographic element to her collages that would come to define her visually. Here, skyscrapers overlap, receding and ascending like the abstract shapes of White Form, but Höch’s art has become life, capturing a sense of the city’s vertiginous new architectural buildup through impossible conflicting planes.

Höch’s contribution to Berlin Dada is represented well here, including well-known political collages such as High Finance (1923), which uses the imagery of industrialism, weaponry and scientific advancement to build a patchwork of satire. Although these pieces show Höch’s direct and polemical engagement with the dynamic changes that affected the economy and society of her time, greater aesthetic power can be found in works made later in that decade. In Children (1925) and The Scream (1930), Höch’s darker sensibility gains voice. These truncated figures with their tiny legs and huge gaping maws are the stuff of nightmares, conjuring the abject wail of Antonin Artaud alongside Dada’s silly futility. Höch’s series From an Ethnographic Museum (1924-34), displayed in an adjacent section, pushes further this masked strangeness. Many members of the avant garde in Höch’s generation had a penchant for the formal qualities of the tribal objects that were being imported to the west via the colonies. In works such as The Sweet One (1926) and Indian Dancer (1930), photographs of African masks and totems are merged with images of stone sculptures and human faces or limbs, suggesting an openness to cultural fusion that was underpinned by a desire to appropriate the tribal into the aesthetic repertoire of modernism, on modernism’s own terms.

The early 30s saw the increasing prominence of the theatrical and the absurd in Höch’s work, with The Big Step and Flight (both 1931) reflecting the farcicality of the pantomime and the nonsensicality of Dada. But from 1933 onwards, Nazi restrictions on the avant garde’s freedom of expression and exhibition began to bite, and during the second world war, Höch retreated to rural Germany, producing relatively austere pieces, such as Point of View (c1940), in which grimacing masks float against a background of blurred red.

The final room of the show condenses Höch’s remaining career into one historical period: 1945-78. It reveals a postwar re-examination of abstraction and “the fantastic”, after the conservatism of the previous decade. Works such as Composition in Grey (1965) experiment with new materials – here, string and marbled paper. Texture and shape take precedence over political or social commentary, though the latter are still major elements. The dynamic angularity of forms in Space Travel (1956) and Angel of Peace (c1958), for instance, betray a preoccupation with modern technology’s visual language, its otherworldly sheen.

Set among today’s cultural context, in which editors and samplers prevail over craftsmen, these collages inevitably appeal to contemporary audiences, offering them a fresh humour that somehow endures. Perhaps this explains why the show’s curators chose so traditional a display – the white walls and framed, evenly spaced works are possibly an attempt reintroduce historical weight to a medium that has been appropriated, overused, even bastardised by current visual culture. Unfortunately, this choice has only served to conventionalise Höch’s works, dulling their inherent vivacity. Whitechapel Gallery exhibitions usually succeed at making exciting work feel at home through bold curation (the overstuffing of the gallery for the recent Sarah Lucas retrospective, for instance, or the colourful and complex layout of the 2012 Gillian Wearing show).

In addition to the curators’ failure to reflect the erratic aesthetics and technique of collage, they present too few artworks in too much space, especially in the 1945-78 display. Viewing Höch’s pieces requires an intimacy comparable to leafing through a magazine or browsing an antiques shop. As it is, each is isolated in a wash of white into which its intensity bleeds and is lost, and as a consequence the exhibition feels both too expansive and incomplete. Far from a “compressed utterance”, the show is a stuttering monologue drawn out into a long, tapering diminuendo. 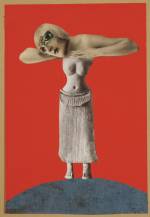 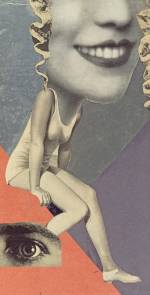