Gillian Wearing and Claude Cahun: Behind the Mask, Another Mask

Gillian Wearing and Claude Cahun: Behind the Mask, Another Mask

Defying history, this exhibition reveals crucial parallels between the surrealist Claude Cahun and contemporary artist Gillian Wearing, from the birth to the death of their manifold identities 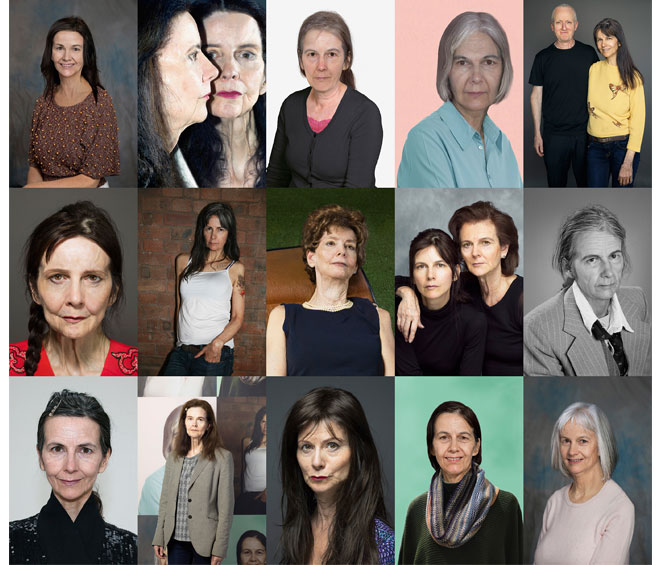 Pairing artists from different periods in history is always risky, but this exhibition brings surrealist Claude Cahun (1894-1954) and contemporary artist Gillian Wearing (b1963) together brilliantly through clever display and insightful commentary. The show is timely and topical – while identity politics have pervaded art for decades, the questions of gender fluidity and self-fashioning in both artists’ work are part of everyday discourse in today’s media. Not only this, but the Wearing-Cahun conjunction seems so natural that it feels as if this exhibition should have been made before, while Wearing’s own fascination for Cahun cements the comparison and enriches the show.

The starting point for the exhibition is Wearing’s photograph Me as Cahun Holding a Mask of My Face (2012), in which she inhabits Cahun’s body in a remake of the latter’s presentation of herself as a feminine weightlifter in Don’t Kiss Me I’m in Training (1927). If this seems complicated, it is: Wearing’s face hangs from the hand of Wearing masked as Cahun, in a parody of Cahun posing as both painted woman and masculine athlete. It sends a message that the complex slipping and sliding of identities, and the artists’ resistance to fixity, is written into every work on display.

Although largely thematic in structure, the beginning and end of the exhibition provide chronological bookends. Cahun’s early portraits were made with her childhood friend, her stepsister and lover Marcel Moore after both women moved from Nantes to Paris in 1914, when they also adopted the gender-neutral pseudonyms by which they are now known. The androgyny of youth lent itself to Cahun’s varied self-fashioning as female writer, dandy and a boyish head on a pillow, and as her own father in a 1919 portrait that presages Wearing’s series Album (2003), included later in the exhibition, in which Wearing masked and dressed herself as members of her own family.

Cahun’s early photographs and her writing, which is discussed alongside the imagery, show her and Moore’s fascination for the way in which identity conforms to the familiar norms and categories constructed through hairstyle, clothing, pose and facial expression, as well as a keen awareness of the role played by mediation – photographic staging, framing and publishing – in fixing those norms in place. Wearing is seen experimenting in the same way in an adjacent room in her series My Polaroid Years (1988-2015). This is a group of almost 150 photographs of Wearing taken between 1988 and 2005 that the artist rediscovered in 2015 and called her “early selfies”. Unlike Cahun’s portraits from the 1910s and 20s – and perhaps because of the immediacy of Polaroid technology – here, Wearing seems to explore her personal identity rather than other, elaborately constructed ones: despite small changes in pose and appearance, these are sequences showing Wearing as Wearing, contemplating what that might mean via a personal experiment not initially made for exhibition.

As the show begins to introduce themes, bringing masquerade and performance together with surrealism and art-historical reflection, the intelligence of its design becomes clear. Rather than pushing the artists together, it encourages natural connections to arise, as well as allowing for cross-pollination of ideas across rooms. This reflects the challenge presented by two artists whose work makes resistance to categorisation their central subject: all the works are about masking, performance, self-identity, gender fluidity and cultural history. It also means that key pieces can be shown that do not fit into a rigid conceptual order. There can be a small room devoted to showing four of the masks that Wearing wore in her photographs, which are fascinating to see; a photograph of crystal heads taken by Cahun when she visited the British Museum in London in 1936, revealing further inspiration for her masks; and Wearing’s bizarre Me as a Clock (1990), in which the hands of time pass across a blurred self-portrait as a literal and depressing reminder of the ageing process.

Performance pervades the exhibition repeatedly and most powerfully in a room in which Wearing’s video Dancing in Peckham (1994) is paired with a contact sheet of photographs of Cahun as she moves with free and celebratory gestures on a Nazi-built wall after the liberation of her wartime home of Jersey in 1945. The unselfconscious movements of Cahun are echoed in the amusing footage of Wearing in headphones, dancing with abandon in the middle of a shopping centre. But while Cahun, who had been imprisoned and sentenced to death by the Nazis for her involvement in the French Resistance, celebrates individual liberation, Wearing, whose movements are based on those of a woman she saw dancing at a jazz concert at the Royal Albert Hall, hides behind another self, presenting a caricature of that other’s unselfconsciousness.

Curiously, while the Wearing video is the original work, the Cahun images are a wall-sized reproduction of the contact sheet, as if enlarged to cover empty space. Meanwhile, the original Cahun contact sheet itself appears in a later room that is also devoted to performance, but in a less convincing way: in the room are further images of Cahun posing in a feminine manner in various settings in Jersey, as well as Wearing masked as her “spiritual family” of the artists and photographers who have influenced her. Since these works seem no more performative than any others in the show, this prompts the question as to whether this and the “dancing” rooms were separated in order to fill the available rooms, with their thematic distinctions carved out after the fact.

By contrast, the sections on masquerade and surrealism draw insightful parallels between the two artists. Noting that while Cahun’s masks cover her eyes, Wearing’s always allow the wearer’s eyes to stare through, a divergence emerges between each artist’s approach to the power of the gaze and the relative vulnerability of the masked versus their audience. Wearing seems to retain this power, being able to see her viewer while also being seen not as herself but as she wishes to be seen. Cahun, at once blinded and watched, is vulnerable – an extreme example of this is a photograph in which she is naked except for the mask on her face. This begs the question, raised by the exhibition’s subtitle that comes from Cahun’s writings, as to whether there is “another mask” behind the mask, or whether the mask veils a deep insecurity and raw susceptibility that is at once exposed and covered by the act of masking. As Wearing stated of Cahun’s 1930 book Aveux non Avenus (Cancelled Confessions), photocollages from which are included in the exhibition: “She looks like she is going to say something in the ear of her other head, confronting one aspect of herself with another.”

The final room functions as both memorial to Cahun and memento mori to Wearing. An entire wall is covered with Wearing’sRock ’n’ Roll 70 Wallpaper(2015-16), featuring computer-generated and constructed scenes showing the artist as she imagines she might age, along with Rock ’n’ Roll 70 (2015), a triptych showing Wearing at 50, Wearing as she imagines she might look at 70, and a space for an actual photograph of her 70-year-old self to be added in 2034. This blank space has the curious effect of a double absence, as if Wearing’s image has been removed from the triptych after death, as well as the space awaiting a portrait that, admittedly, might never come.

Despite this mournful sentiment, the chilling effect of this room is attributable to Wearing’s photographic reflections on her “relationship” with Cahun – albeit posthumous and non-consensual. Cahun and Wearing 2017 is a double portrait made by Wearing for this exhibition, and shows the two artists side-by-side, cloaked in black and each with a white arm emerging as if disembodied. In Claude and Gillian’s Shadow (2017), Wearing inserts herself into Cahun’s photograph and therefore into her history, as if collaborating in the creative act in the same way that Cahun did with Moore throughout their lives. Finally, and most disturbing, is Wearing’s at Cahun’s Grave (2015), based on Cahun’s 1947 photograph of herself posing in a blank white mask in the graveyard in which she would later be buried. In Wearing’s version, she rests her own head on Cahun’s gravestone, her face totally covered in black material. It is as if Wearing mourns the death not only of Cahun, but of one of her own multiple, adopted identities and of the ability for many selves to write themselves on a being, pointing to the emptiness left by a face that once had the ability to enliven, animate and recreate itself, now silenced by death. 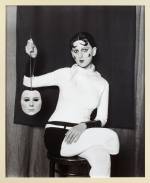 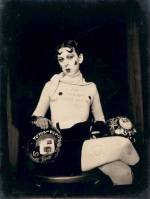 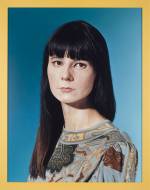 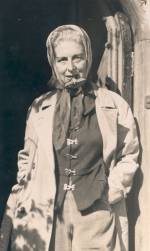 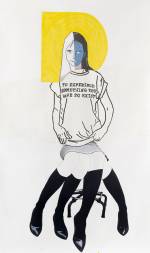 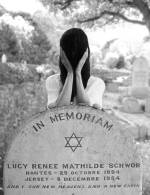