There are few things I find more disturbing than René Magritte’s paintings. Sombre, eerie and melancholic, they have an uncanny ability to upset my sense of time, place and belonging.

No matter what I am doing, the instant a Magritte enters my life – most often in the form of a book reproduction – I stop in my tracks and attempt to gather my composure. For a moment, I make an effort to concentrate, reminding myself that these strange trompe l’oeil appearances are “just art”, that they are not “real”, and that that objects around me are going to behave as usual and not transmogrify into strange hybrid beings. It does not take more than a fraction of a second to convince myself of the solidity of my immediate surroundings, but then all I am looking at is a reproduction, conveying an idea of a painting, not the painting itself. When I enter an exhibition space with Magrittes surrounding me, the sense of normalcy disappears and I find myself in the world of surreality – or, rather, super-reality – created by the artist.

Magritte: The Mystery of the Ordinary, 1926- 1938, on view at the Museum of Modern Art, gathered more than 100 objects relating to the most productive period of the artist’s career. The majority of the works on display are paintings; there are also several collages, painted objects, books, and photographs. Organised by a consortium of institutions, MoMA, the Menil Collection and the Art Institute of Chicago, the exhibition has been arranged by Anne Umland, the Blanchette Hooker Rockefeller curator of painting and sculpture, with Danielle Johnson, curatorial assistant in the department of painting and sculpture.

In 1926, Magritte abandoned painting in the style of synthetic Cubism and began making Surrealist art, influenced by the likes of Giorgio de Chirico, Max Ernst, Marcel Duchamp and Pablo Picasso. Having exhibited his Surrealist works in his native Brussels in 1927, he moved to Paris for three years, lured by the French capital’s vibrant cultural scene. Although many of his early Surrealist works were collages, he very rapidly switched mostly to painting, developing a signature “super-real” style, responsible for his works’ maddening effect. The principal characteristic of this style is the artist’s painstaking effort to create the utmost representational illusion of whatever object happens to be at the centre of his attention. To achieve this visual surreality, not only did Magritte use traditional drawing techniques, such as chiaroscuro, but he also applied paint in very thick, crusty layers, a device that positioned him outside the bounds of classical representation. The solidity and impenetrability of the painterly layer is partly responsible for the vexation we experience in front of his works. On some of his paintings, such as Le Dormeur téméraire (The Reckless Sleeper) of 1928, for example, the crust of paint is so thick that it creates a relief of sorts, making the represented objects tangible and therefore distressing. In La Parure de l’orage (The Finery of the Storm) of 1927, ornamental vertical cutouts placed in front of a desolate seascape appear to be collaged on to the canvas – so dense, hard-edged and object-like are they. In fact, these ornamental totem poles are painted on to the canvas, producing a striking juxtaposition of an illusionist background and relief-like, tangible foreground.

Taking into consideration Magritte’s tendency to sculpt paint on canvas, it is little wonder that, beginning in the 30s, he experimented with leaving the confines of 2D representation and making painted objects, such as Les Menottes de cuivre (The Copper Handcuffs), L’Avenir des statues (The Future of Statues), and Le Fait primitif (The Primordial Fact). Because they lose the connection with the inherently illusionistic painterly support, these objects are far less disturbing than paintings. An exception may be Ceci est un morceau de fromage (This is a Piece of Cheese), a tiny painting of cheese placed under a cover on a serving plate, presaging Claes Oldenburg’s uneatable pies and hamburgers. Titles were very important for Magritte. He gave them a great deal of thought and consulted about them with his Surrealist friends. To convey the significance of the linguistic element in Magritte’s thinking, the curators left the titles of works in the original French with translations into English.

Indeed, the guiding thread to unravelling the mystery of Magritte’s art is to understand its intrinsic relationship to language and to approach this art as irreversibly conceptual. In this respect, his famous painting of a pipe with a text “this is not a pipe” underneath can serve us as a guidepost of sorts. Magritte entitled this painting La Trahison des images (Treachery of Images). Before touching the canvas with his brush, the most important task for the artist was to develop an idea of a what he was going to represent: “In the course of my research, I became certain that the element to be discovered, the unique feature residing obscurely in each object, was always known to me in advance, but that my knowledge of it was, so to speak, hidden in the depths of my thought. As my research had necessarily to arrive at a single correct answer for each object, my investigation took the form of trying to find the solution of the problem with three points of reference: the object, the something linked to it in the obscurity of my consciousness, and the light into which this something had to be brought.”1 More than simulacral doubles, mirror images, inscrutable reversals, immobile figures, closed eyes, congealed blood or discombobulated body parts, what disorients and mystifies us in Magritte’s meticulously finished works is his perpetual and futile search to grasp an essence of an object through a mental effort and represent this intuited essence in all its inevitable obscurity. Unlike in language, in painting metaphor does not always rule. When it does, we find ourselves in a hyperbolic, nightmarish world, which appears to have lost all connection with reality.

Reference
1. La Ligne de vie (1938) by René Magritte in René Magritte, 1898-1967, edited by Gisèle Ollinger-Zinque and Frederik Leen, published by Ludion Press, 1998, pages 44-48. Cited in Once Image is Isolated, What Happens to the Mind? by Michel Draguet and Claude Goormans in Magritte: The Mystery of the Ordinary, exhibition catalogue (New York: The Museum of Modern Art, 2013), page 154. 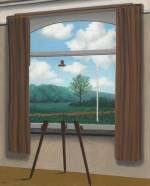 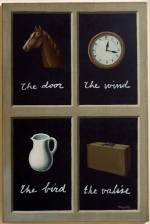 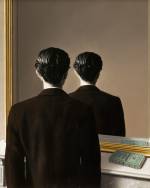 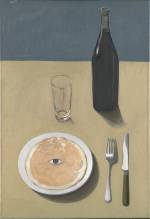 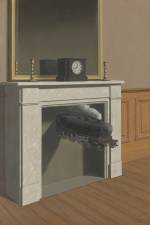