The Museum of the City of New York is highlighting one of the most fascinating instances of artistic and cultural exchange in history in its current exhibit, Paris/New York: Design Fashion Culture, 1925–40. During the years between the first and second world wars, the balance of power between the world's great centers of art, literature, culture and commerce shifted, with the United States beginning its ascendancy as an economic titan with vast industrial resources and admirable marketing acumen. Prior to World War I, Paris reigned as arbiter of culture. Like a magnet, Paris drew artists, designers, musicians, writers and intellectuals from around the globe for training and the camaraderie of like-minded peers. A stronghold of tradition, Paris also stood for artistic freedom. Advocates of tradition and modernism wrangled, while artists themselves either chose sides or moved from the past and present to the future. Their ideas encompassed themes, particular concerns and designs from Northern Europe, notably Germany, Eastern Europe and the Far East.

The complex relationship between Paris and New York City, which served as the crucible for integrating and adapting designs before trends and styles filtered to the rest of the country, involved admiration, sometimes grudging; jealousy, occasionally fierce; and opportunism, frequently economically rewarding. The cross-currents touched nearly every aspect of life: fashion, architecture, home and work spaces, cuisine, performing arts, advertising and even town planning. Designers in Paris and New York played with all of the styles circulating during these years (Art Nouveau, Art Deco, Cubism, the International Style, Neo-Romanticism and Surrealism) as they developed individual expressions of a modernism that never completely dispensed with some form of tradition; for example, Beaux-Arts motifs or aesthetic principles. Generally, the designs and creative advertising in Paris aimed at the upper classes, and efforts in the states worked to attract a mass audience with adaptations for American sensibilities.

Two international fairs bracket the time period covered in the show, the 1925 Exposition Internationale des Arts Décoratifs et Industriels Modernes in Paris and the New York World's Fair of 1939–1940 in Flushing Meadows, Queens. A walk through the exhibit feels as if one is visiting a lilliputian version of these fairs. The range of materials showcased at the historic venues announced each city's capacity to hold the 'best' life had to offer, topped off with crowd-pleasing entertainment (including fireworks) and haute cuisine. Paris/New York provides a shorthand account of the 'best', with examples of fashions, furniture, period photographs, periodical illustrations, architectural drawings, menus and advertising ephemera (as well as a video clip of jazz icon Josephine Baker) grouped into sections. The full story can be found in the exhibition catalogue, published by the museum and the Monacelli Press, which plumbs the depths of the creative transatlantic tango between two of the world's most influential cities. Apart from a record of the exhibit, the catalogue will attract professionals and lay people interested in a complete range of design history.1

Edited and introduced by exhibit curator Donald Albrecht, the catalogue is as stylish as Paris prior to World War I and as streamlined as New York in the 1930s. Designed by New York-based Pure + Design studio, the volume alternates bordered pages (text and art on white stock) with illustrated full-page spreads. A particularly effective strategy used by Pure + Applied is placing illustrations on spreads either on a black background (a gouache and watercolor drawing of the French pavilion at the 1939–1940 New York World's Fair, for example), or reproducing the most dynamic images full bleed (for instance, a black-and-white period photograph of two Art Deco sculptors, French Ecole des Beaux-Arts-educated sculptor René Paul Chambellan and American Lee Lawrie, at work on a sculpture for Rockefeller Center, circa 1932).

Catalogue readers will likely spend much of their time perusing such delightful items as a menu from the French pavilion; a chart tracing pavilion staff as they advanced their careers, post fair, at many of the city's most famous restaurants; fashion photographs of such socialites and taste-makers as Mona Williams (taken by Cecil Beaton in the late 1930s); the Paris apartment of famed hairdresser Antoine, circa 1937; store displays at Lord & Taylor and Macy's; advertising ephemera from famed French sailing vessel the Normandie (as well as a photo of the sumptuous first-class dining room and silver-plated tableware); and photos of Josephine Baker.

A contextual introduction and eleven focused essays connect the visual feast for an exciting trip through the years 1925–1940. Among the experts tapped for inclusion are Jean-Louis Cohen, architect and professor of architectural history at New York University, explaining the differences and similarities in regional planning in Paris and New York; Isabelle Gournay, associate professor of architecture at the University of Maryland, examining the Parisians' view of New York skyscrapers; Jody Blake, curator of the Tobin Collection of Theatre Arts at the McNay Art Museum in San Antonio, Texas, relating how black jazz formed bridges between cultures and ethnicities; Phyllis Magidson, curator of costumes and textiles at the Museum of the City of New York, following the fashion thread from Paris to the birth of home-grown industry in New York; Amy Azzarito, a librarian at the New York Public Library, describing Paris haute cuisine's arrival on a mass scale in New York; and Kenneth E. Silver, professor of modern art at New York University, arguing for the critical influence that Neo-Romantic artists had on theatre, fashion and interior design. A chapter on the ways in which the Paris/New York tango has echoed from 1940 to the present day, a point suggested in the exhibition literature and catalogue, would have added to what is an essential reference and beautiful coffee-table book.

On the whole, a visit to the Museum of the City of New York admirably conveys a sense of New York's role as a cultural, artistic, political, economic and social center with international impact, as well as an idiosyncratic city where people from every corner of the world contribute to an ever-evolving melting pot. Daily, large numbers of tourists and natives travel far uptown, about twenty blocks north of the Metropolitan Museum of Art on Fifth Avenue, to view a variety of displays; concurrent with Paris/New York, for example, are Eudora Welty in New York: Photographs of the 1930s (through 16 February 2009); Catholics in New York, 1808–1946 (through 31 December 2008); Broken Glass: Portraits of the Bronx by Ray Mortensen, through 8 March 2009); and an on-going exhibit, Perform: A History of New York Theatre and Broadway. As demonstrated in Paris/New York, the formative years between the first and second world wars weigh heavily in the city's self-perception and international reputation. The most dramatic image in the show, a promotional photograph from 1934, succinctly expresses the exhibit's manifesto. In the photo, the designer superimposed the Normandie, the largest, fastest and most luxurious vessel to cross the Atlantic, on skyscraper-crowded New York City streets. By positioning the ocean-going ambassador of French culture in the midst of city’s behemoths, the designer made clear that each city had power and substance and could, together, send shock waves around the world.

Footnote
1. The 240-page exhibition catalogue contains 250 illustrations (100 in full color). The essays are prefaced by an extensive introduction contributed by show curator and catalogue editor Donald Albrecht, who serves as curator of Paris/New York and of architecture and design at the museum. The catalogue is available from the museum gift shop (www.mcny.org) and from the Monacelli Press (www.monacellipress.com), an imprint of Random House. 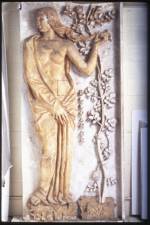 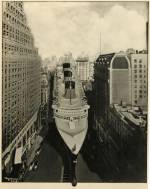 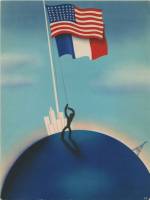 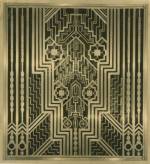 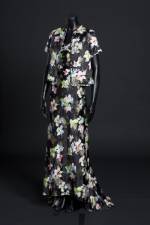 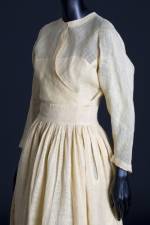 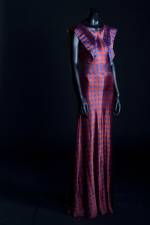 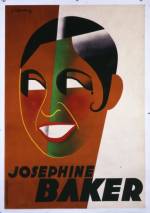 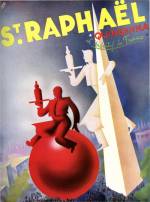 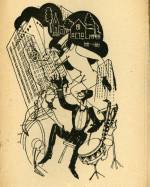 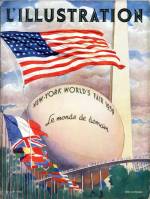