This show looks at how contemporary artists are influenced by the past as they seek to represent their present, and questions the nature of what a portrait depicts

At first glance, the 34 silhouettes are identical reproductions; look a little closer, however, and there are minute differences – hairstyle, direction of gaze, the fall of the light across the woman’s shoulder. This series of portrait miniatures, Made Up Love Song (2011), portraying V&A visitor services assistant Sophia, is the work of the V&A’s 2011 photography artist-in-residence, Bettina von Zwehl (b1971), and its acquisition sparked the idea for this tightly curated, artistically and politically astute display, Facing History: Contemporary Portraiture, which comprises about 80 prints and photographs, drawn from the V&A’s collection, spanning the past 20 years.

With colour woodcuts, black-and-white etchings, bronze medals, cut-paper silhouettes and photography, the display explores how contemporary artists have looked to traditional modes of portraiture in an attempt to recapture something of the genre, moving away from the no-holds-barred autobiographical approach of Tracey Emin et al. Lynette Yiadom-Boakye (b1977) cites Rembrandt in the scale and character of her etching, Siskin (2012), where the sitter is shown wearing a feather ruff – a reference either to the title, a type of bird, or to 17th-century Dutch tradition.

Renaissance portrait medals are placed alongside a terracotta impression of a bronze medal commissioned by the philanthropist and businessman Sir John Paul Getty Jr, created by Jane McAdam Freud (b1958). A holographic medal in the same vitrine draws on the tradition of memento mori, while, hanging opposite are two death masks by Brian D Cohen (b1959) and Gavin Turk (b1967). These works raise the question of what is the “self” that a portrait tries to depict – the living soul or the body that it inhabits?

Mental health is an issue touched on by Gemma Anderson (b1981), whose two etchings, Elsy and Tim (both 2010), come from the series Portraits: Patients and Psychiatrists, depicting staff and patients at the world’s oldest psychiatric hospital, the Bethlem in London, without revealing who belongs to which category. Only the props and motifs accompanying the sitters’ heads might act as clues: insects, birds, plants and organs. As with a saint’s attributes, the identity is there to be deciphered, if only you know the code.

Grayson Perry (b1960) looks to 19th-century American folk art to shape his dual portrait, Mr and Mrs Perry (2006). Linocuts printed on commercial patterned papers, which could easily be mistaken for wallpaper, they conjure up a domestic setting, familial, where identity might be determined both by surroundings – place and space – and by belonging.

Mexican Pedro Meyer (b1935) takes a more political approach, with Five Dollars with Che (1992) using the identity of one revolutionary to represent the nation as a whole – synecdochic portraiture. Furthering this nationalistic approach, Russian Natalia Lamanova (b1964) plays with stamps and passports, while Argentinian Cecilia Mandrile (b1969) is showing a set of “ID” cards, in which the letters ID stand not for “identity” but for “intensively displaced”, referring to the way in which many migrants, after being forced to leave their countries of origin, are then constantly driven to move nomadically from place to place. Are these documents of identity being heralded as portraits, collating a history of these exiled souls, or is the suggestion that these bureaucratic statements of officialdom, purportedly defining a person’s identity – and therefore surely his or her portrait – actually do nothing of the sort?

Tom Hunter (b1965) confronts the travesty of modern day “justice” head-on with his photographic reinterpretation of Vermeer’s Girl Reading a Letter at an Open Window (1657), here depicting a woman reading a possession order for the East London squat she and her baby have been inhabiting (Woman Reading Possession Order, 1997). The pairing of the print with a photocopy of this eviction summons highlights the plight of many in an unequal society and seems to plead through the wall to the woven tarpaulin lithograph, O Debates (2004), by the Brazilian Jarbas Lopes (b1964), which melds the images of two election candidates, creating, literally, a “two-faced politician”, commenting on the duplicitous and unfair nature of contemporary society and politics.

Both Cindy Sherman (b1954) and Ellen Heck (b1983) show sitters playfully taking on the identity of others, Heck with 11 works from her wonderful series, Forty Fridas (2012), a set of colour woodcut and drypoint prints, in which the subjects imitate both the style of dress and the direct gaze of the Mexican painter Frida Kahlo (1907-54).

Less playful – indeed, with a somewhat chilling air – are the four C-type colour prints by German artist Thomas Ruff (b1958), in which he has replaced the natural eyes of his sitters with the same set of blue irises. These works question not only the objectivity of the photograph – Ruff was trained at the Düsseldorf Academy of Art – but also what it is about us that best communicates our personality and character. Are the eyes really the mirror of the soul? To me, these photographs are the most deceptive of all the works on display; more death-like even than the death masks.

The display may be small, but it showcases some wonderful works from the V&A’s collection and weaves them together into a conversation that makes some strong political statements, that looks at the way in which contemporary artists are influenced by the past, as they seeks means of representing their present, and that questions not only the media but the very nature and core of the subject matter in contemporary portraiture. 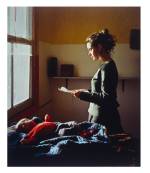 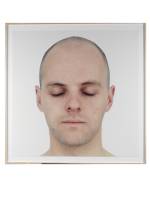 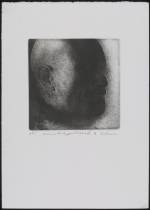 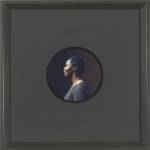 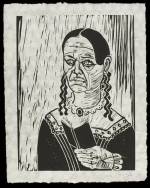 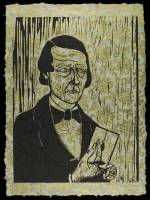 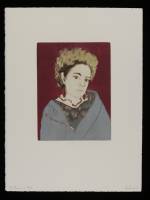 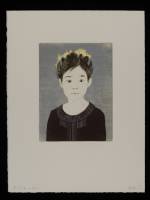 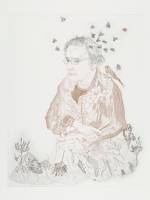