Are You A Lolita? Japan Fashion Now

Are You A Lolita?

From avant-garde bag ladies and Asian Ivy-Leaguers to folksy Forest Girls and fashion-eating Lolitas, Japanese style trends have, since the 1980s, increasingly drawn global interest. At the start of the 21st century, Tokyo had begun to eclipse other fashion centres and now is the quintessential fashion capital; youth clamour for novelty at lightning speed and consume fashion more quickly than an ever-expanding cadre of talented designers can produce it.

Most of the recent styles originated on the streets, transposing the typical flow of inspiration; today, designers take their cues from their demanding clientele. The locus of power in this creative alliance will not be found among the fashion-conscious rich-and-famous; rather, distinct groups of geographically based youth – termed style tribes and consisting primarily of middle-school and teenaged girls across class – are the power brokers by virtue of their obsessions. They express their individual and collective identities with clothing and accessories. Typical of Japan, style as social adhesive is evident in the people's preference for uniforms. As they continue to use style to form and cement social networks, young Japanese have turned against traditional work ethics and lifestyles. As the country's economy continues to slump and such guarantees as lifetime employment erodes, they have a bleak outlook on the future. Their passion for clothing, manga, anime and electronics is a creative release from uncertainty.

A recently released book and current exhibit, both titled Japan Fashion Now, are sparking nearly as much curiosity as the high-fashion and fast-brand clothing coming out of Japan.1 Displayed in New York at the Museum at the Fashion Institute of Technology (FIT), the show focuses on avant-garde designers of the 1980s and street-bred trends from the 1990s into the 21st century. As they enter the show, visitors will encounter in one room a small selection of garments by Issey Miyake, Yohji Yamamoto, Rei Kawakubo of Comme des Garçons and other Japanese designers who have made their in the West. FIT's curators have created an elegant, serene space here as prelude to viewing in a second gallery a larger selection of contemporary street-wear and high fashion. Backdrops of photographs and video, and audio clips of contemporary Japanese music, provide a window into the country's complex fashion culture.

Capitalising on the pre-opening press buzz, early in October the museum hosted a “Lolita Tea Party”. The Lolita template consists of frilly clothing in pastel shades augmented with an excess of feminine accessories (ie ruffles, bows, bonnets, parasols and dolls). The overall impression is of a wedding cake. Following a talk between Masayo Fukuda-Williams and Jeff Williams (founders of New York-based clothing store Tokyo Rebel) and GASHICON (illustrator of the Hangry & Angry comic strip and graphic designer for the Lolita-style brand h.NAOTO), participants were treated to tea and pastries.

Those dressed in Lolita-style and its variants (Sweet, Victorian, Gothic, Prince, etc.) had their pictures taken, as Japanese youth do in maid cafes and at cosplay events.2 The tea party reflected a profoundly Japanese concept, kawaii, or “cute”, a style now associated with the world’s ubiquitous ambassador of cute, Hello Kitty. (She appears in the show on the skirt of a dress from Korean designer Han Ahn Soon's 2008 Toy Collection.) Inherently sweet and innocent, “cute” style also symbolises rebellion. A preference for and appreciation of subtlety are fundamental elements of Japanese culture. Japanese youth may appropriate overt Western symbols of rebellion (razor blades, skulls, leather jackets) while their own subversions, such as wearing school uniforms on the street, are the antithesis of Western bravura.

Where the exhibit proceeds through contrast between the sophisticated fashions from the 1980s and recent pop-culture infused styles, the catalogue succeeds through correspondence and divergence. In their essays, FIT Chief Curator and Museum Director Valerie Steele, Deputy Director Patricia Mears, Yuniya Kawamura and Hiroshi Narumi marshal their sprawling material into order, keeping the text, related at a brisk pace, concise.3 The outstanding visuals alternate between standard fashion photography and on-the-scenes photo-documentary. As the authors describe the historical, cultural and economic changes feeding Japanese trends, they demonstrate how the Japanese transform what they borrow into unique cultural expressions of, for example, American cowboy, Ivy League and motorcycle gangster looks. Filtered through the Japanese aesthetic, denim has become a fine art. Western brands like Louis Vuitton have taken note of the Japanese people's interest in Paris-based labels and partnered with Japanese artists and designers to tailor products to Japanese tastes; in one instance, artist Takashi Murakami signed on to design a version of the famed Louis Vuitton Monogram canvas. A small photo of Murakami's Cherry Blossom Monogram handbag from 2003 in the catalogue exemplifies kawaii.

In Steele's opening essay, Is Japan Still the Future?, she places the groundbreaking work of Japanese designers from the 1970s and 1980s in context. Identifying certain elements that mark these designers as “Japanese” (pattern-making techniques, traditional fashion and body culture, textile-based designs), Steele argues against definitions exclusively based on ethnic and cultural labels and aesthetic philosophies (eg wabi-sabi) which have been applied to Hanae Mori, Kenzo Takada, Miyake, Kawakubo and Yamamoto.4 With Kawakubo, Steele says, such labels particularly mislead; the fashion press and consumers, she states, have repeatedly misunderstood Kawakubo's concepts. To illustrate, Steele excerpts a letter to the editor of Vogue (printed in the June 1983 issue) suggesting that a certain Kawakubo design most suited a bag lady.5 Steele also introduces successful emerging designers and brands (hNAOTO; Baby, The Stars Shine Bright; Angelic Pretty; etc). Much of their success derives from style-tribe driven demand for novelty (termed imeji cheinji, or “image change”). This demand has produced Lolita-style and its offshoots; Mori, or “Forest Girls”; Onesankei, or “Older Sisters”; Ageha, or “Butterfly Girls”; “Antique Dolls” and other sub-cultural styles.

The two concluding catalogue sections examine Japanese fashion subcultures (Kawamura's contribution) and Japanese street styles (Narumi's). In addition to photos of retail outlets, tribe members parading on the streets and costumed cosplayers, readers will find historical photos narrating group styles that have swept Japan during the past 60 years. For many Westerners, style-tribe sociology will prove fascinating but elusive. Unlike the political and social concerns of Western youth in the 1960s, ideology has never been important to members of style tribes, who socialise to share their passions.

Yet the choice of a style is, in fact, a statement. Narumi says that girls in Japan might wear Western-influenced clothing and admire Western musical styles, but “they have not been so concerned with assimilating Western culture”.6 In a way, they are as isolationist as their country in earlier centuries, living in a world of their making. As otaku, or hardcore fan girls and boys, Japanese youth immerse themselves in their subculture. In her discussion of brand Baby, The Stars Shine Bright, Steele mentions a growing synergy between popular clothing brands and doll and toy manufacturers. The urge to dress up indicates a desire to play. Some commentators have defined this desire as infantile, but Japan Fashion Now reveals a more positive role: creativity. Tribe members style their outfits, selecting from a mind-boggling array of merchandise; cosplayers make their own clothing.

Readers might wish that Steele's profiles of tribe members, detailing their garments with prices in Japanese yen, included monetary exchange figures, and that captions for high fashion garments consistently listed fabrics. These omissions are trumped by sheer visual drama. Most readers will devour the essays and photos as eagerly as Japanese youth eat fashion. The female punk musical duo Hangry & Angry (named for GASHICON's comic strip) stare provocatively from the cover, challenging readers to become otaku and enter a world with many shades and shadows. Dressed in theatrically memorable outfits designed by h.NAOTO, they seem to be daring readers to answer the question posed in Steele's essay, Is Japan Still the Future?with a resounding “Yes”.

1. Published by Yale University Press, the 240-page paperback catalogue contains 120 colour illustrations and retails for US$39.95/UK£29.99.
2. Maid cafes are a type of cosplay restaurant in which social and gender relationships are explored and expressed. Cosplayers make and wear costumes of their favorite manga and anime characters.
3. FIT Associate Professor of Sociology Yuniya Kawamura has published extensively on fashion and culture and is the author of The Japanese Revolution in Paris Fashion and the forthcoming Japanese Youth as Producers of Fashion Subcultures. Hiroshi Narumi teaches at Kyoto University of Art and Design and edits the Japanese journal Cosplay.
4. The wabi-sabi aesthetic projects a view of beauty that is imperfect and transient. It encompasses objects and pursuits from the humblest to fine art. In Eastern cultures, the division between "high" and "low" art blurs or dissolves when one considers the means and intention of the maker.
5. Japan Fashion Now, p20.
6. Ibid: 244. 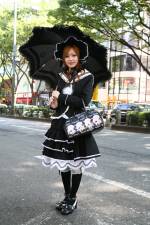 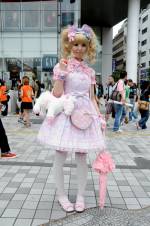