This unmissable two-venue retrospective of Anthony Caro’s work encompasses everything from his vast steel sculptures of the 1960s to his table pieces, to his jewellery, ending with his final works

Ending the tribute he gave at a memorial for Anthony Caro (1924-2013) held at Tate Britain, American critic Michael Fried proposed a commemorative exhibition spread across London. The Tate and the Royal Academy would hold Caro’s floor-based abstract steel sculptures, with one of those institutions dedicated to the “crucial decade” of the 60s. The Serpentine would house the table sculptures; the Hayward, the bronzes. A venue would be needed for the semi-figurative tableaux The Trojan War and The Last Judgement; another for the outdoor works, from the Toronto Flats onwards. Fried felt that only these multiple spaces could possibly begin to illustrate the sheer size and range of Caro’s output. As importantly, only the gesture of taking over an entire city all at once could match Caro’s importance as a central figure in modernism and the “greatest English artist since John Constable”.

Caro in Yorkshire, planned after the sculptor’s death in October 2013, is rooted in a similar sense of Caro as a fecund, omnivorous and restless artist, who has left a complex and almost limitless oeuvre. Both the Yorkshire Sculpture Park and the Hepworth Wakefield have significant exhibitions (though neither is totally given over to Caro); these are supplemented by a large sculpture placed in the plaza in front of the Henry Moore Institute and Leeds Art Gallery. In September, a conference at the institute, entitled Sculpture: 1965, will examine the wider context of sculpture in Britain 50 years ago, picking a point two years after the solo exhibition at the Whitechapel Art Gallery with which Caro announced himself as a major force in British art.

The curators at the Yorkshire Sculpture Park and the Hepworth share Fried’s – and pretty much everyone else’s – sense of the relative importance of Caro’s 60s sculptures: the brightly painted, floor-based, steel constructions, which, along with his teaching at St Martin’s School of Art, inspired generations of British sculptors. Clear, immediate, optimistic, sometimes supremely elegant, sometimes oddly gawky, they are easy to like, although – and this is what makes the best of them great – their attractiveness does not make them easily knowable, or preclude a tough matter-of-factness. Both venues have significant examples – Hopscotch (1962) at the Hepworth; Second Sculpture (1960), Sculpture Seven (1961) and Month of May (1963) in and around the Longside Gallery of the YSP. The Hepworth also has a display of early table-pieces from the mid- to late-60s: the first abstract sculptures Caro made at small-scale, which, instead of standing directly on the floor, are anchored to, and hang over, the side of a plinth.

The table-sculptures are one of the highlights of the Yorkshire exhibitions. Those from the first couple of years of Caro’s experiments are the most successful. Table Piece XLII (1967) and Table Piece LIV (1968) have a quiet inevitability, as if they had generated themselves. As has often been commented on, some include “readymade” handles taken from tools, stressing, by ironic contrast, a sense of untouchable remoteness. Restrained, but too definite to be fragile, they are perhaps the most abstract of Caro’s sculptures and command a space much larger than their small size. They remind me of Degas’ small ballet dancers. Those from the end of the 60s do not quite match their predecessors. They are perhaps overly elegant, or at least rely too completely on their elegance. Where the first Table Pieces imply and exploit a distance from the workings of the artist, the curved planes of Table Piece LXXV (1969) or Lap (1969) are almost explicitly gestural, looking as if they had been effortlessly deposited along the points of a curve traced by a languid sweep of an arm.

The later Table Piece CCLXVI (1975) replaces a single gesture with an interlocking set of gestures, dispersed within an architectural framework. First introduced in the early 60s, in works such as Hopscotch, the format of a quasi-architecture supporting and merging with the trace of a human presence remained with Caro right until the monumental Morning Shadows (2012), made the year before his death. The integration of architecture and sculpture was one of the fundamentals of his art – he may have discovered the sculpture of David Smith on his now-mythologised 1959 journey to America, but he had gone at least in part to see “the pure crystalline architecture of Mies van der Rohe”. Yet this section of the Hepworth’s loosely thematic exhibition misses this point, with an over-literal presentation. The wooden Child’s Tower Room (1983/84) has always seemed to me to be oversized and inconsequential, while Moon Drift (2001/03) should perhaps have remained an unseen byproduct of Caro’s unhappy collaboration with Norman Foster on the – briefly wobbly – Millennium Bridge. These, and other “sculpitecture” projects, such as the collaboration with Frank Gehry, are not the ultimate expression of Caro’s linking of sculpture and architecture, but a minor – even if large-sized – deviation from what was a much more pervasive and important impulse.

It might be more profitable to look right back to Early One Morning (1962). In it, Caro perfectly synthesised the sculpture of Smith and Julio González with the lateral extension, asymmetrical plan, cantilevers and “pure crystalline” form of modernist architecture. Framework and human trace, architecture and bodily presence become almost indistinguishable from each other. Triumphant, taut and expansive, it is, perhaps, the single truly significant British contribution to the art of the 20th century. Currently very poorly displayed at Tate Britain, its horizontal planes absurdly rhymed with a David Hockney swimming-board, it is a shame it did not make it north to Yorkshire.

Though the exhibitions does not – perhaps cannot – give me the ammunition to construct a convincing argument that Caro consistently surpassed his achievements of the 60s in any subsequent decade, happily there are good things shown from throughout his career. It is a pleasure to see a large group of the Flats from the 70s beautifully placed across the Lower Park at YSP. An antidote to the refinement of the late-60s Caro, they pick up the gawky frontality of Sculpture Seven – their cartoon-like lines are also reminiscent of the pre-abstract sculpture in their comic crudity, and have an insistently figurative stance under their abstract shapes. It is also good to see that many of the better works across both venues are recent. Morning Shadows strikes me in a way it did not at Gagosian a few years ago: I would have liked it to have been shown alongside another of Caro’s “grand machines”, Xanadu (1986/88), Hopscotch, Sculpture Seven, or even Early One Morning. I don’t think it would be shamed by the comparison. The crushed steel sculptures Sackbut (2011/12), Autumn Rhapsody (2011/12) and Alpine (2012), their self-contained forms interrupted by thick sheets of Perspex, have a freshness and lightness not always present in his volumetric sculptures – Autumn Rhapsody particularly benefits from the space and light of its window spot at Longside, not available in Caro’s last solo exhibition at Annely Juda. Showing works from this group in more direct communion with the 60s sculptures could have been revelatory.

What is missing in both the Hepworth and YSP is a consistent sense of the power of Caro’s sculpture. Particularly at the Hepworth, sculptures are oddly or tamely positioned – Hopscotch is too close to a wall, so its darting lines appears flattened; while, beyond a general impression of skeletal structures and black or brown colouring, none of the sculptures grouped around After Emma (1977/82) in the room entitled Making Use of Architectural Features is brought into real communication with each other. This might be a difficulty with Caro in general. His frequent attraction to the large statement, to the creation of all-encompassing artworks, especially as rendered within the physically disruptive medium of sculpture,naturally means that his output will tend to be difficult to show en masse, particularly in exhibitions that run the gauntlet of more than six decades of production (the best Caro exhibition I’ve seen was in Venice two years ago, where sculptures were shown individually in single bays).

But I think the problem is more particular than this general difficulty. Confronted by the vast spread of Caro’s career, these two exhibitions try to cram too much in, compounding the problem by occasional repetitions or overlaps between the two venues, and, more importantly, by venturing too often on to the less profitable pathways that Caro’s seemingly boundless creativity led him down.  The jewellery on display at the Hepworth was stylish, but says very little about his sculpture; I struggled to maintain an interest in the large numbers of paper reliefs at the YSP; and the even larger array of Caro’s 50s figurative drawings and sculptures nearby are surely only of academic interest – rather than providing a context for the beautiful shock of Month of May, the dense display of the early work seemed to muddy the waters, to provide too confusing a diversion on the way to the main event. Overall, small works make up too great a chunk of the 200 items on display – and it is an especial shame that, perhaps partly to accommodate this profusion, YSP has intrusively partitioned the Longside Gallery, normally such a wonderful place to look at sculpture. Maybe the variety of small works is needed to demonstrate Caro’s range to a public who might be unfamiliar with it? Or was it thought that smaller works are easier to grasp for those unused to the very real difficulties of understanding abstract sculpture? That both venues have a display of the scale-models Caro used as part of his exhibition planning could support both ideas. Even bearing such unavoidable considerations in mind, these shows, despite combining to create a very generous and unmissable survey – I’ve already booked my next trip up from London – ultimately imply a lack of confidence in Caro’s sculpture. Such a confidence would be essential to make a truly convincing case in support of the importance that I believe Fried was right to ascribe to it.

• You might also like to read the review of Art in Dialogue: Duccio | Caro, which is at the National Gallery, London, 13 June – 8 November 2015. 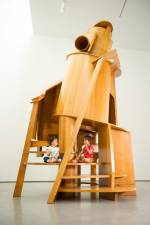 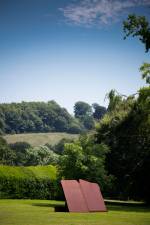 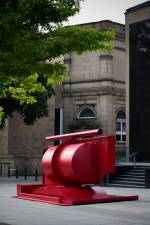