Bringing together a medieval Sienese altarpiece fragment and a late-20th-century abstract sculpture, despite their being separated by more than 700 years, opens up a lively dialogue that sheds new light on both works

In 1999, the National Gallery invited Sir Anthony Caro (1924-2013) – along with 23 other major contemporary artists – to create a new work in response to one painting each in its permanent collection. The result was an exhibition entitled Encounters – New Art from Old (14 June – 17 September 2000), which formed part of the gallery’s millennium celebrations. Caro, choosing to respond to a small fragment of a work by the medieval Sienese master Duccio di Buoninsegna (active from 1278 until his death in 1319), produced not just one but seven sculptures, forming the Duccio Variations (1999-2000). The third of these is now on display in room 66, alongside the painting that acted as the catalyst, The Annunciation (1307/8-11).

This small tempera on poplar panel was acquired by the National Gallery in 1883, thanks to the dealer Charles Fairfax Murray, who acted as agent and adviser to the then director, Frederick William Burton. Up to this point, the collection, while strong in its holdings of works from the Florentine, Umbrian, Venetian and Ferrarese schools, was lacking in examples by Sienese artists. This was due to the historiographic tradition established in Vasari’s Lives of the Most Eminent Painters, Sculptors and Architects (1550). Murray, however, was pro-active in pushing Sienese art and sold five such paintings to the National Gallery in the early 1880s.

Part of a monumental double-sided altarpiece (the Maestà), painted for the high altar of Siena Cathedral and dismembered in 1771, The Annunciation shows the Archangel Gabriel appearing to the Virgin Mary, telling her she is to bear the son of God. The Holy Spirit, in the form of a dove, can be seen under the central arch, about to enter Mary’s womb. The event was predicted by the Old Testament prophet Isaiah, whose words are inscribed on Mary’s book. Mary’s virginity is alluded to by the white lilies. This panel is the first of a sequence of small pictures from the lower level (predella) of the altarpiece’s front. The purchase of this fragment by the gallery, along with part of the reverse predella, Jesus opens the Eyes of a Man born Blind, led to the gift of a third panel, The Transfiguration, in 1891. Much of the rest of the altarpiece, the largest and most costly panel painting ever produced, remains in the Siena Cathedral Museum.

Architecture within paintings has often been treated as a something of a passive background but, for Duccio, it was part of the very composition of the painting and its narrative. In The Annunciation, multiple viewpoints produce a real and yet impossible setting – perhaps a reflection on the nature of the Immaculate Conception itself? Linear perspective as we know it today was introduced in 1435 in a treatise entitled On Painting by Leon Battista Alberti. In his address, he developed the ideas of the architect Filippo Brunelleschi (1377-1446), responsible both for the dome on Florence’s cathedral and two perspective panels recording with scientific precision the appearance of receding architectural forms on a flat surface. Alberti described in simple mathematical terms how to plot forms on a perspective grid, disappearing at a central vanishing point. Duccio, working more than a century earlier, instead used his primitive ideas of perspective to respond to and further the sense of narrative, focusing on the three-dimensionality of the figures, set against a gold background. The grey porch – distinct from the terracotta walls – frames Mary, suggesting her separation from the world and her immaculate purity.

Caro had a strong interest in Italian paintings of the 14th and 15th centuries and, speaking of The Annunciation, he said: “What I saw in it was an image that interested me first and foremost in terms of its being so architectural.” Specifically, he was concerned with how the use of architecture and space affects the viewing process and response. He admired the tenderness of Duccio’s work, calling it “a painting with feelings of love … a delicate, almost feminine picture”. An artist who normally preferred to work with metal or Perspex, Caro carved his third response to The Annunciation in walnut, showing a deliberate engagement with the material as well as the content of Duccio’s work. The soft varnish echoes the gilt background of the painting. Unsurprisingly for an abstract sculptor, Gabriel and Mary are absent from all Caro’s renderings, and the arches in No 3 would not quite be high enough for a life-size figure to stand beneath. Their presence, however, is strongly implied. The first of his variations – made in steel and wood – is the most representational, with interlocking doors and windows and a bowl in place of the vase – suggestive also of a womb. By the third, however, Caro has reduced the narrative to pure and basic structural elements, with each subsequent variation a simplification of the previous one. The verticals and arches of No 3 mimic the painting’s internal organisation; the diagonal line is said to allude to Gabriel’s dynamic stance, with his arm held out towards the Virgin Mary. The leanings of parts of the structure reflect the leaning in of the angel. Some of the arches have been upended, perhaps a suggestion of how Mary’s life is about to be turned upside down.

Like an MC Escher (1898-1972) painting, the architecture of Caro’s work leaves us perplexed, wondering how the different levels connect, what the wooden objects once might have been, and whether it would be possible to enter the sculpture. In the current display, visitors are able to walk around it, perusing it from all angles, peering through it to the seemingly tiny Duccio on the wall. This adds to both works, stimulating a dialogue between the two, pulling the viewer into Duccio’s frame, almost able to feel the touch of the angel and the Holy Spirit. Actually, however, Caro intended his Variations to be viewed strictly from the front, controlling the viewers’ access, just as is the case for a painting.

Despite its sharp corners, there is a gentleness and tenderness to this piece, not present in the majority of Caro’s work. The curves and arches give it a melodious quality and Caro indeed spoke in lyrical terms, describing The Annunciation as “the original theme in a set of musical variations”. The intimacy of the small room in which the works are displayed reflects the confines of the architecture in Duccio’s painting. Some may complain – I’ve certainly heard many do so – about the juxtaposing of a piece of modern secular sculpture with a medieval religious painting, but, as Caro himself said: “Art’s a growing thing. As a contemporary artist, you’re matching yourself with a pretty high standard, and you’ve got to try and measure up. Looking at art awakens, speaks to, the creative part of you, the spectator. It digs deep into the best part of people. And art has the potential to change people. I have always thought that.”1 Go and listen to what these works have to say to one another and only then offer your two pennies’ worth to the conversation.

• You might also like to read the review of Caro in Yorkshire, which is at the Hepworth Wakefield and Yorkshire Sculpture Park, Yorkshire, 18 July – 1 November 2015. 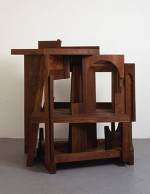 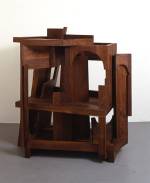