The sacred purpose of art is to invite us to question and to re-examine experience. Art that does not set out to do this, which does no more than reassure or reaffirm, cannot be called art at all, but entertainment. This process of re-examination can work at all levels and in all areas of our experience, ranging from the moral dilemmas posed by Henrik Ibsen, to the sensually austere sound world presented by Anton Webern.

The material nature of the respective arts implicitly proposes, and often delimits what can be asked, suggested or said. The material world of sculpture is what Auguste Rodin called 'the art of the lump and the hole'. However, this should not be taken to mean that sculpture is confined to the mere manipulation of plastic forms and voids in space. It can also acquire additional and unexpected resonance from such devices as allusion, in which certain forms evoke others, often at an unconscious level. It can even imply a narrative stream, arising from mimesis, and from the spectator's subjective movement towards, around and through the sculpture's space.

This comprehensive retrospective of Anthony Caro's work demonstrates beyond question that his mature work, now covering some 45 years, challenges and often inverts many of our most cherished presumptions about the nature of sculpture. Our expectation that the sculptural object is solidly opaque is overturned by pieces which are airily transparent. The celebration of facture - the process of making - in the form of fingerprints in clay and casts, or the striations of files and scraping tools, is rejected in favour of a deliberate impersonality of surface. Our presumption that sculpture should be monumental, sober and serious is challenged by work descending from the plinth which is playful and humorous.

Although Caro has had an important influence on the development of British sculpture - partly through his work and partly through his teaching at St Martin's School of Art in London - it is significant that the formative forces upon his own work came as much, or more, from abroad as from Britain. Frequent periods spent in the USA brought him into close contact with many of the most influential figures there in the Sixties and subsequently, including David Smith, Kenneth Noland and the critic Clement Greenberg.

Although Caro maintains a reverence and respect for Henry Moore, for whom he worked as an assistant, and from whom he learned a great deal about the nature of sculpture, there can be no doubt that if he had not immersed himself in the American art scene, his work could not have taken the form it did. It is also questionable whether he would have attained the reputation he now enjoys, both in the UK and internationally.

Caro's early mature pieces, such as 'Early One Morning' (1962) or 'Month of May' (1963) invite us to engage with the object in terms of a distillation of plastic and kinetic sensations, including notions of weight, lightness, tension and balance. They implicitly repudiate associations of anthropomorphism and narrative. To that extent, they are self-referential. However, they amount to much more than solipsistic navel-gazing. They engage the spectator in a physical and emotional dialogue with the object, arousing an array of kinaesthetic responses: in addition to physical responses in real space - walking to, by, around and through the object - our visual perceptions initiate an inner world of touching, reaching, stretching and balancing.

Three decades later, there is a remarkable transformation. In his massive multi-piece 'The Last Judgement' (1995-1999), we see a reversion to many of the sculptural values manifestly absent in the work of the Sixties. These more recent pieces are often massively opaque, sometimes reminiscent of the timbers of some ancient redoubt, or of siege assault weapons and artillery. In place of impersonal and immaculate painted surfaces we find a thorough-going texturalism, a celebration of wood grain, rope, and the dust of rusting steel.

Most significant of all, we sense a need to 'tell us something' through allusion and fragments of narrative. This 'something' sounds like a cry of pain and protest at a world which has so clearly failed to realise the ideals of a young man in the Sixties; a world in which war, torture, oppression and cruelty are still lamentably commonplace.

Many visitors will, I anticipate, feel a sense of overbearing oppression and gloom walking around and through these late, gigantic objects. They may also, like me, wonder whether Caro's sculptural language is no longer capable of, or suited to, the purposes to which he wishes to put it. The ponderous symbolism of bells, trumpets and body parts can raise expectations of the sublime and result in bathos. Perhaps he should now be writing pamphlets or a book?

How does Caro connect with the sensibilities and needs of this new century? Does he, as Quakers say, 'speak to our condition'? It was an enlightened decision to make the exhibition free, but even with that incentive, on the day that I visited attendance was sparse. One must put this into a context in which, on occasion, even exhibitions with substantial entry charges may be so crowded that it is impossible to enjoy the work on display and it is commonplace to have to queue to obtain a ticket.

This is not, of course, an absolute judgement against Caro, or his standing in the development of world art. However, it does pose special problems for an art form such as sculpture, which is by definition physically substantial, difficult to store and yet still widely regarded as suitable for public places. We have a growing cultural problem arising from the imposition of sculptural commissions on a public which at best may be indifferent and at worst, hostile. The continuing 'battle of Aldeburgh Beach' highlights the problems of a cultural conflict in which proponents of a monument - in this case to Benjamin Britten - see it as a fitting memorial, while others see it as a desecration of a familiar and loved landscape.

We may tolerate, or even enjoy Caro's sculpture in the specialist confines of the Tate Gallery, but how would we feel about it as a permanent feature of a well-loved, familiar landscape? 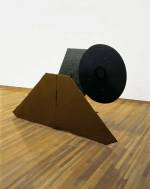