The Chinese artist Ai Weiwei, with his Sunflower Seeds exhibition, has set a mind-twisting game in the Tate Modern in which sensorial stimulus and cognition processes are confounded into a single operation repeated millions of times. Ai Weiwei uses the creative potential of imitation to reinvent and reformulate an unchanging language.

Born in 1957, in Beijing, he grew up in the province of Xinjiang. His father, a poet and writer, was accused of being an anti-revolutionary and after a period in jail, was punished with hard labour and had to move with his family to a province isolated by the Gobi desert. In the late 1970s, Weiwei returned to the capital and began to make art alongside other artists in a pro-democracy group called “Stars”. The subsequent governmental reaction against their exhibitions led Weiwei to go New York to try life in the US, working at many different jobs until he established himself as an artist.

In 1993, he returned to Beijing, where he became the protagonist of a generation of contemporary artists that emerged in China, even under the restraint of the coercive censorship. Since then he has been working as an architect, designer, writer, curator and publisher. Weiwei has exhibited internationally, including recent solo shows at the Mori Art Museum, Tokyo and the Haus der Kunst, Munich and he participated in the last São Paulo Biennial and the Kassel Documenta 12. As an architect he has designed several buildings and collaborated with the Beijing National Stadium project. Besides this, his writings have always debated forcefully about art and other issues concerning the current socio-political situation in his homeland. For this single work exhibition in London, the artist introduces characteristics of ancient and contemporary China, disconcerting our perceptions. Weiwei’s latest work, Sunflower Seeds, commissioned by the Unilever Series programme, can be seen in Tate Modern until 2 May 2011.

Tate Modern has always impressed the public with overwhelming artworks in the annual Unilever commission programme, held in its Turbine Hall, a vast space in the building, formerly the Bankside Power Station, designed by the architect Sir Giles Gilbert Scott. Since 2000, many renowned artists including Anish Kapoor, Louise Bourgeois and Rachel Whiteread have participated in the Unilever Series. These artists took advantage of the 1,000 square metre space to fill it with giant sculptures and installations. Kapoor for instance, famous for his large outdoor sculptures, created Marsyas (2002), a solid dark red structure more than 150 metres long, that partially obstructed the entrance to the museum, occupying the full length of the hangar-like gallery.

Louise Bourgeois, who in her turn took maximum advantage of the galleries’ height (five storeys), built I Do, I Undo and I Redo (2000), a construction of three steel towers, each one nine metres high, in which spiral staircases with mirrors allowed the visitor to go up and down. Likewise, Rachel Whiteread created Embankment (2005)for the Turbine Hall, the largest work of her career, a labyrinth installation with white casts of boxes stacked in disarray, through which people could walk. In stark contrast to these Western approaches to an immense gallery, the Chinese artist Ai Weiwei decided to conquer the space using a tiny 1.5 centimetres long grain, but in an unimaginable quantity: 100 million sunflower seeds laid as a 130 metres long field of natural elements that have never been sown.

The East’s and West’s divergent modes of perception come to the forefront in the comparison between Weiwei's creation and the previous exhibitions in the Turbine Hall. While in the other artworks there is a formal magnitude that tries to deliver a very personal and intimate experience, Weiwei’s installation is striking to the viewer because it is constituted by a minimal element that compels the audience to further think about an external reality and a broader context. Just as this simplicity characterises delicate ancient Eastern art, so too does Weiwei’s work. Using a simple gesture, he unfolds a sequence of considerations concerning what we are conditioned to see as real, what true history and traditions consist of, how self-aware we are and to what extent we can rely on our senses. If, at first glance, the “carpet” of seeds already causes an impact, the aesthetic experience that Weiwei proposes becomes even more astonishing when one realises that the seeds are handmade fake little pieces of porcelain, pretending to be organic material.

In previous artworks Weiwei has demonstrated an interest in the cultural significance surrounding ceramic, one of the icons of Chinese identity.  However, in other moments, the artist used the Imperial Court porcelain in a much more irreverent and provocative manner. For example, in the photographic series Dropping a Han Dynasty Urn (1995), Weiwei was shown breaking a rare painted vase, and in Han Dynasty Urn With Coca-Cola Logo (1994) he “ruined” an antiquity from 206 BC, copying the Coca-Cola brand onto the surface of the piece. Although, his criticism of the Chinese society built after the Cultural Revolution continues to be harsh, the sunflower seeds possess a sense of tenderness that has not been present in other contestable artworks. For this sculptural installation the artist demonstrated a respectful approach towards Chinese conventions. The artist chose to embrace the tradition whilst keeping his particular nonconformist manner.

The Sunflower Seeds project began thousands of miles away from London in the historical city of Jingdezhen and, upon seeing the artwork, we are taken back to the artist’s nation. Famous for being the porcelain capital of China, Jingdezhen has had porcelain production as its main economical source for more than 1,500 years. The making of pottery has not undergone many changes during this very long period. Maybe the only drastic transformation in this millennial tradition was the incorporation of statues depicting the leader Mao Zedong into the ceramic production, in the mid 20th century. Weiwei, undeniably aware of this attribute, attempted to bring this conventional artistic language to the contemporary art practice. The artist asked the artisans who work with ceramic to create not a singular piece that would adorn a palace, but several tons of little reproductions of the same tiny little thing that together would be displayed on the floor of the Tate Gallery. He hired around 1,600 people to fabricate the minute fragments of ceramic that would be transported to London. All stages of the manufacturing took place in Jingdezhen, from the collection of the raw material, to the modelling and firing. The artisans, in workshops or in their own homes, were gathered into groups to select and wash the better pieces and then paint them. Each side of the replica received four fine strokes to represent a sunflower seed. Despite the huge quantity, every ceramic seed was individually handmade in a lengthy process that took more than two. This is well documented in the 15-minute video that is shown in a room alongside the installation. The artist is seen walking through archaic mills and giving instructions to the workforce in a generous manner. The documentary shows how he became a well-known figure in the city: “Everybody in Jingdezhen knows someone who makes sunflowers” says Weiwei.

This quote leads us to one of the main achievements of the Sunflower Seeds commission, the consequence that the employment of more than 1,000 people in making an artwork may have had on the city of Jingdezhen. We can definitely say that the making of the sunflower seeds has affected social-economic conditions, as it created job opportunities over a period of at least two years. Nevertheless, did they understand what they were doing? This question raises one of the complicated issues that Weiwei tries to make people aware of. If the answer is yes, it is possible to imagine that an aesthetic transformation in the porcelain production would be possible after the experience of these Jingdezhen artisans with contemporary art practice. If the answer is no, the artist is exposing, in a decent and valuable way, the mechanism behind one of the most controversial attributes of contemporary China: the development of a manufacturing industry that has made this country the largest exporting nation.

The whole planet has witnessed the expansion of an industrialised China that supplies the West with a variety of domestic goods, which have replaced the prized ceramic as the main material presence of the Chinese identity abroad. Most of these products are part of the culture of consumerism of other countries, products to which the Chinese population does not even have access. They have become a workforce to reproduce something that, in most cases, they do not know what it is for. It is carried out mechanically, without comprehension or any identity connection. Furthermore, the label “Made in China” nowadays represents the mass-production of objects from electronics to clothes. Unfortunately, the label sometimes carries a negative bias because scandals regarding the environment, the working conditions of the millions of factories’ employees and the proliferation of counterfeit goods.

The Sunflower Seeds projectentices the audience to visualise certain issues concerning the fact that China has become the second-largest economy in the world. Firstly, Weiwei's creation is very successful in reminding us of the huge human labour force behind the mass-production of goods. Next, it induces the mind-twisting game that what can be seen is not what you think you are seeing. This concept appears in many layers of the artwork: from the first impression that the installation brings natural elements to the museum – that turns out to be false – to the presumption that such large quantities can only be made on a factory production line – that also proves to be erroneous. Finally,the Sunflower Seeds transcend social and political matters, giving the public the chance to reflect upon themselves as part of something bigger. It is a common belief that the Western mode of perception is focused on the individual fragment rather than the surroundings. Weiwei created the opportunity for the Tate visitor to carry out the inverse operation, contemplate the smallest portion as part of the whole, perceive the environment and the context instead of a single element and then maybe relate this experience to his/her position in the world.

Note: The installation was intended to be a sensory experience in which visitors to Tate Modern could walk over, lay on, or play with the field of porcelain sunflower seeds. However, in the very first week, the movement of people raised a lot of dust and access to the work was prohibited for health and safety reasons. This resulted in restricting the audience to touching and holding the seeds at the edge of the installation. Some people enjoyed throwing the seeds to listen to the sound that they made and others, confused by the appearance of the seeds, tried to literally taste the porcelain, putting it into their mouths. Now, the museum has also forbidden this kind of interaction.

The events that have happened during the exhibition could be developed into a metaphor for censorship, or East-West differences, concerning art engagement. Nonetheless, it is worth saying that none of the unexpected circumstances has made Weiwei's installation less impressive than it was on the opening day. The important questions raised by Weiwei have been reinforced at the expense of these health and safety issues. In fact, the distance from the object has amplified the curiosity of the viewers and boosted the mental process proposed by the artwork. 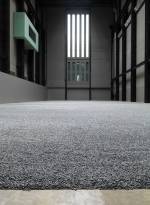 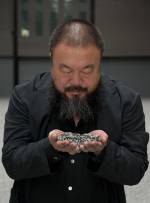