Christ’s College, Cambridge celebrated the 500th anniversary (2010) of its consecration this Easter with the installation of two site-specific altarpiece paintings by the young artist Tom de Freston, who has been the Leverhulme artist in residence there. This is the second major commission of contemporary art by Christ’s College in recent years. A remarkable sculpture by Sir Anthony Caro was installed in the antechapel 10 years ago, and served as a source of inspiration for de Freston. “Caro’s sculpture hits you the moment you enter the antechapel, and I wanted to provide a similar visual fulcrum to the Chapel.”1

That the college has taken such a leap of faith in allying itself with contemporary art deserves to be highlighted, as Nicholas Serota points out in his Foreword to the catalogue that accompanies the project, it “reflects both an understanding of the role art can play in worship and the long history of the involvement of the College with the visual arts”.2 “It [also] raises not only caveats concerning the precise role of nominally Anglican college chapels within an increasingly pluralist, post-Christian, culture, but also larger questions concerning the relative marginality of Christianity within the communal and credal life of all Oxbridge colleges. In the college which nurtured John Milton, Charles Darwin and Rowan Williams, both questions remain especially acute.”3

Tom de Freston’s paintings respond to the austere space of the chapel in architectural and spiritual terms, and also in relation to Caro’s dramatic work. In turn Caro’s work reveals the importance of art historical sources, most notably the Deposition paintings of Rembrandt in Munich and Rubens’ work in Antwerp Cathedral. As with all of his work, Caro’s understanding of space and form is exemplary. Furthermore, his Deposition is a great discovery for those unaware of his occasional return to figuration, for his work is identified with Greenbergian formalist principles. The physicality achieved by Caro’s Deposition was greatly inspiring for the younger artist, as de Freston has firmly acknowledged.

The Archbishop of Canterbury, Dr Rowan Williams, formerly an undergraduate at Christ College, in his catalogue essay Spirituality in de Freston’s Deposition describes the Deposition in art:

The theme of the Deposition, the taking down of Jesus’s body from the cross, was a regular one for painters of the Middle Ages and afterwards. It posed not only a technical but also a theological challenge. Technically there were anatomical matters to get right; the sheer interest of visually managing the various physical tensions involved in shifting a dead body down from a height.4

In theological terms the challenge too, is to endow the body of Christ with an appearance that marks it from any other dead corpse. Williams continues: “Both the reality of the suffering and the radical power of the change have to be held in mind and in heart, and it is this paradox that is celebrated at Easter.”5 Tom de Freston explains the impact of the less well-known sculpture by Caro in relation to Caro’s own explanation, “The Deposition is a tender subject and the sculpture in the antechapel speaks in a minor key. The dead body is being let down from the cross in a winding sheet and wrapped for burial. Mourners surround the scene”.6 As viewers, de Freston adds: “We become one of these mourners. By existing in real space and relating to our size, it turns us into a witness figure”.7 Caro hopes that his sculpture “will help to induce a mood of reflection, a view shared by de Freston, who wanted to produce a work that was not singular in its approach or reading:

This work is not supportive of any institutional form of ideology but searches for pathos in the very human themes of suffering and hope … What is clear in Caro’s sculpture, and I hope in my paintings, is that this inspiration is always filtered through a process which puts the unique tendencies of the artist’s own medium at the centre of their practice.

The left panel has all the figural mechanics of Christ on the cross, but the cross, ladder, witness figures and spatial settings are removed. The two panels are intended to explore the two sides of death; the weight of flesh slowly descending and hope of a rise and spirituality which transcends the boundaries of the body.8

De Freston's solution is a powerful and original one: it is (put very simply) to juxtapose a passive and an active image in a physical medium that seems to be like deep water. A body drops, passively, losing its controlled shape against the resistance of the water: the limbs stray, the head is down. A body rises, pushing through the depths and, as it were, shedding bubbles of breath and trails of light, moving with immense, almost agonised, energy towards the surface of the water. But the contrast between active and passive is not a crude one. The first image also evokes a deliberate journey into darkness, the limbs having a suggestion of walking where you can only feel, not see, your way. And the effort and anguish of the upward thrust in the second panel reminds us that this action is inseparable from the passion, the sacrifice. This draws on the whole historic association of the death and resurrection of Jesus with descent into watery chaos, the chaos that existed before the Word and the Spirit bring light and life, as recorded in Genesis 1 - and so too the association with baptism as our rescue from chaos by the descent of Jesus into these waters. The Church of England's baptismal service speaks of 'the deep waters of death' where Jesus meets us.

Like any Christian shrine, this chapel is centred upon the paradox of a God who changes the world by his passivity, his suffering. Both the reality of the suffering and the radical power of the change have to be held in mind and heart, and it is this paradox that is celebrated at Easter - which is why it is right that the installation of these panels should be in the context of this festival, the heart of all Christian faith.9

Reverend Christopher Woods has been Chaplain and Director of Studies, in Theology, of Christ's College since 2007. He describes the de Freston altarpiece as “new reflection for our time on the human reality of falling to the depths of despair, yet rising again abundantly to life and hope again.” 10

In Cambridge, I attend art exhibitions more often than I attend Church, but this Easter past I was able to combine my worship of art with appropriate behaviour on Easter Sunday for it marked the unveiling of Tom de Freston’s Desposition, (2011) two paintings by the acclaimed young artist, commissioned by Christ’s College Cambridge, for their chapel, as well as the Resurrection itself. The congregation for Evensong was a combination of the religious and the artistic, and of course a number inclined to both forms of transcendence. It was only possible to tell the difference between the worshippers by the profundity of expression during prayer, and the special interest in Tom de Freston’s talk at the end of the service, about the way in which his altar-pieces appeal to secular interpretation of the “Resurrection” as well as traditionally religious.

Indeed, the two paintings – one depicting a male figure’s fall into a deep abyss – and the other portraying a man rising out of that ambiguous void, towards a glorious golden light, fragments of the transcendent, even – appealed to everyone in the congregation, one can assume. Simply, and beautifully, these expressions of fall and resurrection realised an inspiring vision of that very human desire to transcend the dark, tragic elements of life. These altarpieces capture that yearning to be free of death, or fear of death – and to rise up from whatever suffocating depths one may endure.

As de Freston pointed out in his brief talk during Evensong, he wanted to show the ultimately positive vision that the Resurrection embodies – the victory over darkness, rather than only the pain of the Crucifixion itself. Furthermore, he manages to push these feelings without help from the trappings and symbols of traditional visions of the story. He focuses, rather, on the expression through the figure – the way in which a body falls and rises through an ambiguous space – showing, therein, how a body might physically fall and feel in such a situation – how any body might feel. And so we are pulled into these spaces, and that basic empathy, rather than merely worship their glory. We understand the paintings as part of the congregation, as the united, universal feelings of fear and hope that we may escape into and escape from.

As de Freston explains: “The two paintings are intended to offer a binary narrative, one of rise and fall. They are made with the very particular demands of the Chapel in mind, and will hopefully provide a visual and spiritual fulcrum to the space.” At once accessible and glorious, then, de Freston’s achievement is quite remarkable. It is also modest: this is not idol-worship, but clear, honest illumination of what it means to believe in resurrection – in either religion or art.

10. Revd Christopher Woods, “Words of commendation from the Chaplain of Christ's College”, ibid: 97. 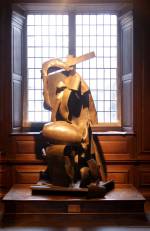 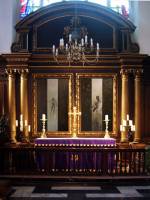 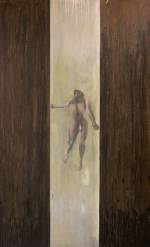 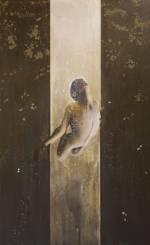