Leading British land artist Andy Goldsworthy is helping the Yorkshire Sculpture Park mark its 30th anniversary with a series of new installations. He returns to the park, where he was once Artist in Residence, with works that use human hair, animal droppings and blood.

Andy Goldsworthy, land artist, is helping the Yorkshire Sculpture Park celebrate 30 years since it opened. Some of his constructions look like they were made to last 300 years. He has been here before: from 1983, and again in l987, he was Artist in Residence, where his work was highly material, but also resonant with seasonality. Goldsworthy has remained true to his principal themes, such as holes, portals, the walk, the journey, with full documentation of all the completed work. There is recognition of both nature and the span of time; of agricultural patterns on the landscape and of key notions such as rooms of clay, sheep pens, and stone mounds. These now get re-interpreted at new installations. 'Hidden Trees' emerges at a new location, inserted into an ancient estate 'ha-ha', with what seems like an archaeological dig there making allusion to how something may be hidden but is always there. There are new 'sheep paintings' by Goldsworthy as well, yet created in fact by the footprints of animals and by the droppings of animals. So-called 'blood drawings' are also on show, arising from the circumstance where an accidentally killed animal leaks blood and snow onto a canvas over which it is hung.

Increasingly, Goldsworthy's raw material is the product of the natural world; rather than merely by allusion and referencing, in fact working with nature as a whole. Goldsworthy admits that there comes a natural foreboding to this work nowadays as there is a need to reflect the harshness of nature as well as its inherent beauty. At the Yorkshire Sculpture Park in the underground galleries (which responds to the artist's need to go underground as well) there are four rooms. Key among these are the 'Clay Room' (2007) and the 'Wood Room' (2007), which deliberately create a claustrophobic, tomb-like atmosphere. A great 'Outclosure' (2007) has been established, a visible reference nearby to the enclosures movement that created rigid and permanent changes to the English landscape 300 years ago. Beyond a further sequence of rooms running into each other, Goldsworthy has encapsulated a curtain of horse-chestnut stalks all pinned together with blackthorns. This art, it has to be said, is labour intensive.

Examples of Goldsworthy's work are widespread in location. In 2000, Goldsworthy built a regular cone-shaped and geometrical cairn. His use of stone has also embellished the riverscape of the Idaho river in the USA - a set of two river stones, soft and rounded, worked over with curved sticks. In Dumfriesshire, Scotland, the fallen branch of an elm has been clad with hogweed stalks, all being slit open to reveal their white insides, and these are held together with thorns, a not uncommon Goldsworthy device. Also in Dumfriesshire, there are his beach constructions and stone houses, the latter have been reproduced in Central Park, Manhattan, at the invitation of the Metropolitan Museum of Art. This installation is located above the tree line. The two stacked columns of carefully balanced stonework are each surrounded by a monumental dome of timber elements. Granite stones were taken from a beach at Glenluce Bay in Dumfriesshire (with all the necessary permissions) and then shipped to New York. The domes themselves are constructed of New England cedar rails. The two tapering pillars of well-balanced granite construction actually rise to 13 feet and 13 feet 5 inches in height.

The author and historian Simon Schama has pointed out in his text written with Goldsworthy and published by Thames & Hudson in their superb Passage (2004, but first published in the New Yorker on 22 Sept 2003) the total difference between land art in open space in America and land art in congested Britain. Of Goldsworthy's 'Garden of Stones' (2003), commissioned by the Museum of Jewish Heritage (in collaboration with the Public Art Fund) Schama writes, '[it is] … in essence an attempt to realise a natural process of catastrophe and redemption'. Of Richard Long's 'A Line Made by Walking' (l967), a simple brush with nature rather than an airbrushing in of appropriate natural elements, Andy Goldsworthy says he was impressed from student days. But he was in no way non-plussed, and his work has taken a different direction. Soon Goldsworthy was co-opting gallery space, the artist as the collaborator where the process was natural. In l998 came a major move forward by Goldsworthy, when he completed the 'Storm King Wall' in the Hudson Valley. He had fortuitously found an old dry stone wall, well overgrown by nature and partly hidden, and he decided to make this his sculpture, all 2,278 feet of dry stone line. It was also rebuilt by wall makers brought over from the north of England. The completed wall line emerges from a surrounding swathe of woodland and then snakes dramatically down the hill, into a pond, finally resurfacing, climbing the opposite bank and so straightening out.

The Yorkshire Sculpture Park 30th Anniversary exhibition of Andy Goldsworthy's work makes a superlative celebration, and Goldsworthy himself is now working at the height of his powers. 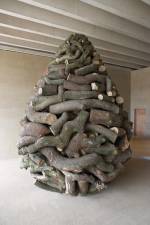