A two-day, 3D festival celebrated the opening of the V&A Dundee with a visual collaboration between Scottish rock band Primal Scream and artist Jim Lambie, and a light, sound and graphics show by Dundee digital creatives Biome Collective and Agency of None 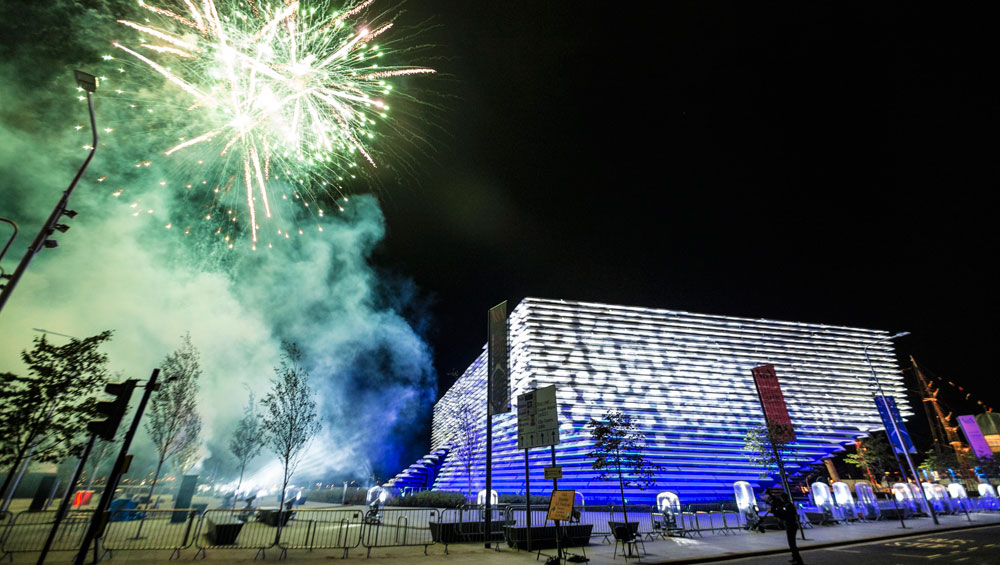 Beginning on Friday night, the eve of the official opening to the public of Scotland’s first design museum, the V&A Dundee, a 3D festival – a “homage to Dundee, design and the city’s spirit of discovery” – featured live music along with light and graphics projects in Slessor Gardens, next to the magnificent new building by Japanese architect Kengo Kuma and the RSS Discovery, in which Captain Scott sailed to Antarctica a century ago. A testament to the enduring and steadfast spirit of the city and its people, the festival was also a chance to celebrate the ties of Dundee to the wider world, both established and new.

The festival, which included dance performances and emerging artists such as Be Charlotte and Lewis Capaldi, was headlined by Scottish rock group Primal Scream, and their collaboration with Turner Prize-nominated artist Jim Lambie was a central attraction. The band and the artist have collaborated in the past – notably for the Primal Scream’s 2003 album cover for Dirty Hits – so this project was a natural product of a decades-long friendship and mutual affinity for the crossovers between music and art. 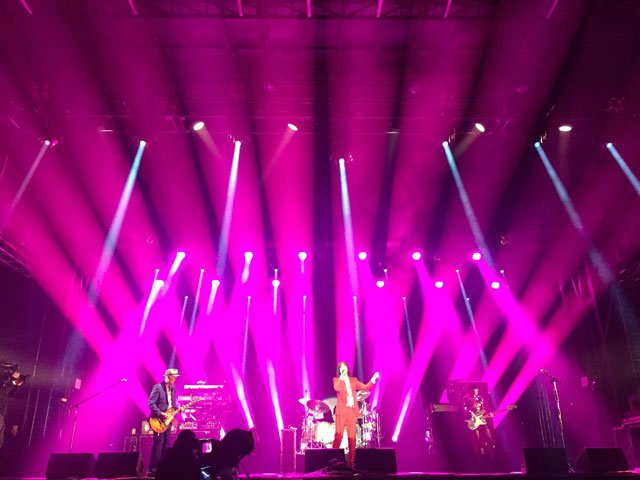 Fusing the psychedelic imagery that the band is known for with its classic songs, the set was nothing short of spectacular. Vibrant and playful, Lambie’s visuals, from the large screen behind the band, were accompanied by impressive light design that provided an immersive and captivating performance, with streams of coloured spotlights like shards and pillars from the stage itself, to neon animations seeming to drip the length of the screen, or bleed colours into one another like inks in water.

Following Primal Scream’s set, the focus shifted from the main stage to the V&A building itself, sitting on the edge of the waterfront, ominous and magnetic at nightfall. A light, sound and graphics show – designed by Dundee-based groups Biome Collective, Agency of None and award-winning lighting company 21CC – lit up the new building in shades of neon, outlining and playing with the form of the museum itself. Described as a “visual language”, Biome Collective’s performance of light and sound (titled Hello World) connected its audience to Kuma’s design in a novel way, in harmony with an immersive graphics experience designed by Agency of None. 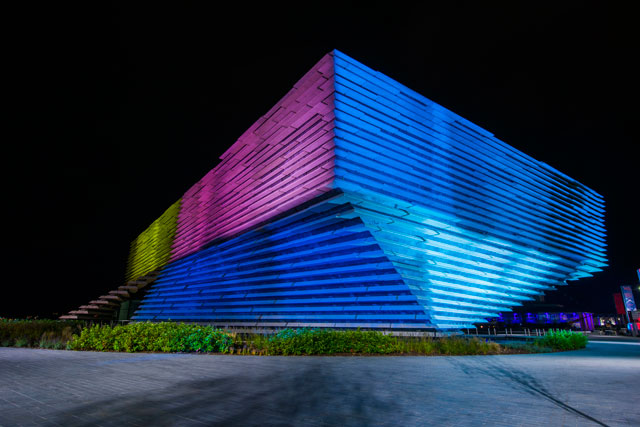 3D Festival, V&A Dundee opening with light, sound and graphics show by Biome Collective and Agency of None.

As the co-founder of Biome Collective Tom deMajo said of the project and the night: “This is a great moment for the people of Dundee to finally welcome this new member of the community. We hope that Hello World defines a point in time for them to meet.” Indeed, that feeling – that moment– was precisely what was being celebrated and encouraged, in a perceptible, but natural mood shift captured by the immersive show.

Illuminating the angles of the building, by turn in neon shade of pink, green, blue and yellow, the enthralling collaboration highlighted features of the museum itself, and connected those details to wider themes and features of the city and its people – bringing to mind not just architectural innovation, but also the video games and contemporary art that the city is well known for. As the spectacle evolved, shimmering patterns and shadows that gave the impression of being under water, connecting to the ship-like form of the V&A and to Dundee’s history of naval exploration and adventure. 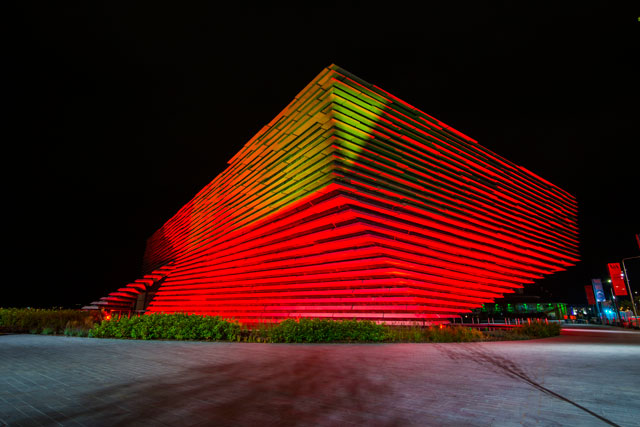 3D Festival, V&A Dundee opening with light, sound and graphics show by Biome Collective and Agency of None.

Fireworks completed the performance, as the V&A was illuminated in a silvery white light, the shadows of the cladding defining its already recognisable form, and complementing the streams of light from the pyrotechnics. As the colours changed again, and more fireworks and smoke flared in reds, greens and blues, there was a sense that in the midst of this spectacle, the new, ship-like building had docked and launched all in the same night. Dundee itself felt at once safely anchored and freely at sea, on the verge of exploring new things, having found a confident balance between the safety of home and the excitement of the new.

Taking inspiration from the surroundings of the building in Dundee, as well as Japanese urban environments such as Shinjuku in Tokyo, the combined performance really spoke to Dundee’s creative and gaming communities especially, and the connections between the city and the rest of the world through art and design. As Lyall Bruce of Agency of None explained: “We have designed an experience to take the audience on a journey that evolves throughout the night; this is a great opportunity to showcase design in wider audience. We want to see Dundee become an internationally recognised centre for all types of design.”

Judging from the reaction of the audience to the spectacular performance, the 3D Festival, and especially its headlining events, defined and celebrated that moment brilliantly; capturing the excitement of the weekend and a strengthened faith in the future of the city and its creative communities, it showed exactly how worthwhile the fusions between art and the city can be, bringing together not only individuals, but also forging links and collaborations between art forms.

In that vein, the following day’s events underlined these ideas with a succession of events, from dance to comic-book illustration, as well as more music and graphics, continuing the atmosphere of the night before.