Although the Royal Academy of Arts includes architecture within its remit, and elects distinguished architects to its membership, the main galleries are all too rarely given over to the subject.

The last such exhibition, New Architecture: Foster, Rogers, Stirling, was timely and memorable, but took place in 1986, now more than a generation ago. It presented Britain’s three “star” architects, all of international repute, triumphally. The timing was perfect, for it captured them on the cusp between the historic transition of the modernist tendency from which each had sprung and the uncertain postmodernist world, within which all three would go on to excel. Before that 1986 exhibition, the RA had not had a large architectural show for four decades.

When, as now, the RA does give itself over to architecture, it marks a cultural need of real public significance. So Sensing Spaces, which focuses on the impact of human perception through the senses: reimagining the art of architecture as a creative process, both cerebral and spiritual, in the 21st century, is a truly chastening prospect. To free up the usual local pressure cooker and open the field to selected talent, there was no bar to selecting a totally international group of seven globally recognised architects. These were: Grafton Architects (Ireland), Diébédo Francis Kéré (Germany/Burkina Faso), Kengo Kuma (Japan), Li Xiaodong (China), Pezo von Ellrichshausen (Chile), Álvaro Siza and Eduardo Souto de Moura (both of Portugal). The magnanimity of the RA’s own architect members is to be applauded, for their enthusiasm rather than their forbearance, in facing up to a wholly offshore selection.

The exhibition duly reaches into the depths of the architects’ own current perception: how to express such human intuition as tactility of materials, ambient smell, visual recognition, mobility, site-specifics, sound and, above everything, spatial cognition and memory impacting, shading into the metaphysical. Here, too, it is the presence of light, in all its varying degrees, those aspects that architects traditionally mobilise, enhancing or dissolving materiality. The exhibition is nothing if not the collective, unorchestrated address of all involved in consummating such interactions, flash or glimmer, “borealis” or reflection.

Kate Goodwin, the curator of the exhibition, has pulled off a remarkable feat. Press reaction is, however, still showing signs of being “confused.com”. Critics achieve little, for example, in seeking to explain to the public the effect of one combination of bamboo on the olfactory senses as “resembling aftershave”. Has imagination remained so wedded to consumer products and toiletries? The mission of the exhibition, says Goodwin, is no less than to “heighten our awareness of the sensory realm of architecture and thereby encourage the creation of a more rewarding built environment”.

Entry to the Royal Academy, off Piccadilly, is via the classical forecourt, which is currently dedicated to Álvaro Siza, whose installation prompts the visitor to reflect on the existing historic setting. Then up the internal steps to the main galleries so to play off these gilded baroque containers. To the right, dramatically soars Grafton’s concrete penetration of their allocated grade II gallery’s roof, as if to sing a descant to light itself. In contradistinction, immediately to the left rises the combination Pezo von Ellrichshausen. Visitors can climb to a bird’s-eye (or sniper’s) view of the adjoining galleries while cosseted by the gilded baroque ceiling mouldings close-up. Close perception here conveys many messages, admitting that voyeurism facilitates perception within and without. Moving leftwards, one reaches Li Xiaodong’s tree-structured maze and secret garden, itself a kind of forest sanctuary. Beyond rises Kengo Kuma’s elemental structure composed of 4mm bamboo rods, revealing several combinations, reflecting nature’s own variety and multiplicity. Yet here is a hymn to materiality, enhanced per se by sheer volume, which denies mass, pervaded softly by the discreet aroma of treated bamboo sticks, redolent of the ancient Japanese Kodo tea ceremony. African architect Diébédo Francis Kéré is the lucky beneficiary of two galleries at the top (north) corner, making a thoroughfare with a linking doorway uniting them. This is dressed with plastic waffle packaging sheets, a spin-off from consumerism, yet offering a short-term spatial sanctuary for the weary to go horizontal, temporarily.

There is in this exhibition a remarkable range of diverse talent, which explores the perceptual world far beyond that which is its everyday “build”. Some of the inspiration represented surfaced subtly several years ago when certain of the participants here attended the Alvar Aalto Symposia at Jyväskylä in Finland. Indeed, Aalto himself was a primary case of the great humanist architect whose reach extended deep into perception in the creative process. Both in his houses,
such as Villa Mairea, in Eastern Finland, and his Viipuri Library (now in Russian Karelia), nature was embraced wilfully internally and externally. This was already a thorough breakaway from modernist dogma. What this exhibition teaches us is the need for public perception of the many sensory contributors not only to the design process of architects, but also to the public recognition of such factors as are inherently readily accessible: not just “eyes that do not see”, but human senses of sound, touch, balance, gradation, light and dark. Such priorities place this exhibition on the highest order of appreciation.

The Royal Academy has also produced an excellent catalogue for the show. The organisers were faced with the not infrequent museum dilemma of going to print before the actual works and installations could be photographed. With this show, this was further complicated by the fact of there being, for example, 10 tonnes of pebbles, 21,120 sticks of hazel (each 80cm long) to form Li Xiaodong’s maze, or 1,867 uniquely connected honeycomb panels with 550,000 straws, required by Diébédo Francis Kéré. In fact, the spirit of this materiality is expressed in the catalogue by directly revealing the installation of these materials in the process of assembly.

The architectural historian Professor Philip Ursprung, of ETH Zurich, has contributed to the catalogue a substantial essay, entitled Presence: The Light Touch of Architecture, in which he lays down a clear exposition of the deeper background to the humanistic concept for the show. Here he elucidates the global resurgence of public interest in an architecture of the senses rather than one that is purely utilitarian or market-led, as thereby favouring the recent wave of totemic buildings by self-acclaimed “signature architects”. Ursprung says, the ideas such architects manifest have lost much of their appeal recently. Thoughtful architects, such as Peter Zumthor or Glenn Murcutt, have with their like-minded colleagues moved ahead in new directions. It is in the evocation of “presence” that this exhibition succeeds above all else, and uniquely offers new directions. 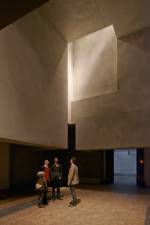 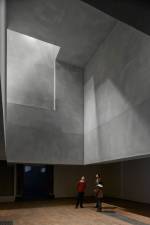 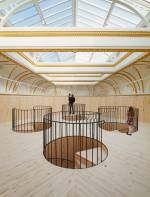