The finale to the long-running course of action to save this historic modernist masterpiece did not come through an astronomic bid by a Russian oligarch at auction but through the final award of a very substantial funding from the Russian Federation. Unlike many such coups, this was indeed literally a coup d’etat: state funds allocated to a masterwork already now in Russia.

International fundraising has proceeded since 1995. Finland and Russia (previously Soviet) agreed to collaborate because the Library was formerly in Finland, but lay in ceded territory in the City of Viipuri (once Finland’s second city) in Karelia and close to St Petersburg. Alvar Aalto had designed it in a competition in 1927, won not long after Finland had gained independence from Lenin, no less. By 1945 Viipuri had become Vyborg, the Finnish population had entirely relocated back to Finland, and the Soviet Union had drawn in a wholly new population from other parts of Russia.

In those bleak post-war years, the new population made good use of the Library, which still stood despite the misinformation of key western architectural historians who claimed in had been “destroyed”. But fortunately only a single artillery shell had hit, impacting the north-west re-entrant, damaging window glass but having little permanent impact on the solid concrete structure. In fact it was the heating system that still worked, and it was this that drew the impoverished new settlers to the building, especially in winter. Aalto himself however, said on a visit from Finland in 1962 that “the Library still stands but it has lost its architecture”. What he rightly meant was that the original superb, undulating timber ceiling of the auditorium had been laid waste, which was true.

This ceiling required an ingenious frame fabricated in St Petersburg, to which the undulating wooden panelling was fitted. Of the original ceiling, the American historian Sigfried Giedion had described it as “in the intimate hall of the Viipuri Library the irrational curves of the ceiling glide through space like the serpentine of a Miró painting”.1 Except there was nothing irrational about Aalto’s acoustically measured design, involving pine strips, tongued and grooved – modulated according to acoustic calculation. The result allowed pure silence, giving succinct emphasis say to the turning of a page on the lectern, as with snow sliding off a branch in the silent Lapland forest – or else perfect audibility even for those seated in the back row. Likewise Aalto had carefully maximised the effect of skylights for reading with much experimentation before construction – 58 copper-flashed circular roof lights were restored.

Since the 1950s the library remained fully in operation although Leningrad architects had considered cladding it, in classical garb, following Stalinist preference. However drastic measures were forestalled, and a genuine attempt was eventually made to replicate what had been lost by the Russian architect Aleksandr Mihailovich Shver. The architect Sergei Kravchenko,2 of a new generation and capable of establishing good rapport with the Aalto office in Helsinki, surveyed the entire building and was able to confirm that the building (and the architecture) was repairable and restorable by 1991. Alvar Aalto of course was now no longer alive, but his widow Elissa Aalto paid an instrumental part in developing good relations between the Finnish and Russian authorities involved. From that date a solid working relationship for restoration grew between the two nations. In 1992 the Finnish Committee for Restoration was established and this was internationalised in 1995 (Elissa Aalto died in 1994).

Kravchenko’s work had ascertained that restoration was viable, and in 1998 the Getty Grant Program duly funded Project Preparation work to be undertaken by the Aalto Office. Educational programmes were attached now to the venture. The superb acoustic qualities of the undulating ceiling (as envisioned by Aalto) were verified by Danish specialists. Restoration plans were prepared for this incorporating the original specifications for Karelian pine, with a proper grading quality in terms of the amount of knots and annular rings revealed as originally conceived by Aalto. The question of a new disabled access lift is in consideration too, although the community spirit of the city was reflected by Kravchenko when earlier challenged: “If a disabled person arrives we all together assist here.”

The key initial restoration item was the massive glass façade, the steel-framed window wall at the main entrance lobby, a major technical feat in 1933. This was dedicated to both Elissa Aalto and the Vyborg Library Director Svetlana Semenova, both of whom died in 1994, and who were the initiators together of the whole restoration project. A special bonus in the restoration has been the fact that the leading architects involved had themselves worked in Aalto’s Atelier, and so could understand his special methods and way of working things out, with numerous sketches, sometimes even on site with contractors. Such was a situation akin to that of any one of the great Renaissance master’s studio. This has lent a further stamp of authenticity to the project.

The book now published3 describes in consummate detail every step in the protracted collaboration followed through from 1992. Full evidence in drawings (Finnish and Russian) and archival and contemporary photographic documentation, revealed for example Aalto’s early prioritisation of landscape, a free-form pond exists in drawings, lying in a contoured recess in the park opposite the main entrance doors. This feature too was carefully calculated, insofar as it derived from ground water run-off so mitigating site dampness around the building occurring in each spring snow thaw. Overall, the now advanced project towards completion demonstrates a remarkable track record, a case study in architectural conservation. Also the staged timescale required for achievement, prevailed with the dedication and good feeling generated by architects, librarians, local councillors, and the numerous private and corporate, international and local sponsors on the basis of preserving a masterpiece of major importance. Post-war such resolution and collaboration would have seemed inconceivable. Now it comes as a reality.

The publication celebrates the recovery of this quiet architectural icon, and gives the roll of honour of those in Finland and Russia, as well as abroad, who have made this achievement a reality. The trajectory of this endeavour demonstrates also the absolute dedication that, as with a major painting or sculpture, a key work of architecture can generate. Architects Tapani Mustonen, Leif Englund and Maija Kairamo have seen the project through, with consummate skill and diplomacy, with the enthusiasm added of Tatyana Svetelnikova, Librarian Director of the now re-named Central City Alvar Aalto Library in Vyborg. Given the wholly debilitating effects of decades of conflict war, evacuation, economic collapse and prevailing global austerity (again today) this outcome is nothing short of miraculous. Nor can the historical change of fortune that the city sits close to the Russian borderland with the European Community, do other than offer major potential internationally for the future significance of the Library. 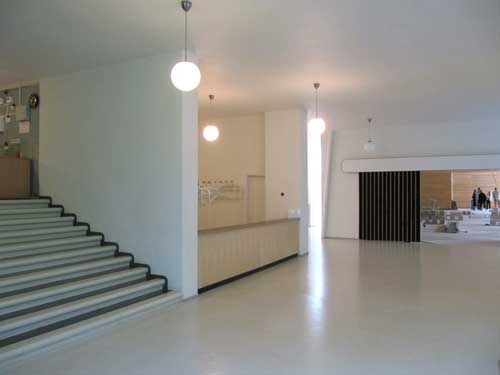 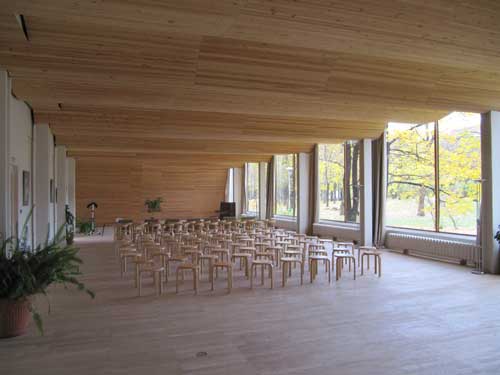