Roger Stonehouse was the chosen author for this extensive monograph, which forms a catalogue raisonné. Stonehouse wrote the monograph, published by the same author, on Sir Colin St John Wilson's completed British Library (2004). The new book emerges so soon after the architect's death, itself only lacking an introduction by Wilson, for obvious reasons.

Unlike the book on the British Library, there is here a generous but well-disposed allocation of colour throughout, including the photographs by Martin Charles and, later, Gustave Stromberg, as well as colour reproductions of numerous of Wilson's developmental sketches and ideograms. That is a vital necessity in recognising Wilson's inimitable graphic skills as well as his formal virtuosity (he was of course initially a painter in his early career). At the recent commemoration lectures at the Royal Academy (28 November 2007), where he had been a longstanding academician, addresses were given before a special gathering of friends and colleagues. Alongside these were a number of his former students, most now also holding distinguished chairs or positions of distinction themselves. His impact on the entire British and American architectural scene was immeasurable over 60 years as an architect and teacher. If you had been fortunate enough to be a tutorial student of Wilson's, the wisdom and enquiry never left you. Many of course didn't measure up, but Wilson was a humane teacher, and let them down lightly. The School of Architecture in the 1960s and again in the 1980s was a great centre of architectural discourse, and earlier both Colin Rowe and Peter Eisenman enhanced this standing.

Roger Stonehouse was himself a former Wilson student. He therefore possesses a special insight, which allows him to convey the essence of the experience, and this careful enthusiasm is controlled and still infuses the work as a whole. The series of Wilson's works, projects and completed buildings are each described in close detail and positioned both by chronology and by typology. The British Library itself, a fitting although hard-won climax to Wilson's entire career, accounts for about 20% of the book and text overall. Stonehouse skilfully analyses the general sources that influenced the Library design, up to and including the four variants, which were lined up in the office as a kind of finale. Perhaps not enough credit here is given to each one, since they were interrelated (this is more fully described in the previous book). The extent to which the Spring House, Cambridge, designed for Christopher Cornford, was formative in the British Library design is forensically plotted by Stonehouse here. He has commendably restrained the inevitable tendency of the former student in him to romanticise this intellectually prolific master.

There is very little actual critique from an external viewpoint of the work. It was interesting to see Stonehouse giving full rein to the erstwhile comments of Colin Rowe on visiting 2 Grantchester Road, and emphasising the monumentality of this small building, which of course he loved. But it would have been invaluable to have included in the text overall, the comments of such figures as Joseph Rykwert, Robert Maxwell, P Reyner Banham, and later Eric Parry and Peter Blundell Jones, on individual projects or tendencies, as they waxed and waned over this long career. By comparison, it must be said that the work of Sir James Stirling, a close friend of Wilson, usefully generated much critique that added to the discourse over the years and decades, of value subsequently to students and colleagues, as well as historians.

Stonehouse has perhaps taken the materiality of Wilson's architecture too much for granted; this is strongly emphasised by detailed illustrations in the book particularly (in colour) of brickwork, timber and stone detailing. A pleasant surprise is the appearance (in full colour) of the Cor-Ten steel clad Biochemistry Laboratory Building which Wilson designed with Michael Brawne and Peter Carolin at Babraham (1965-1971). The important role of MJ Long, Wilson's wife and long-term partner, from the Spring House period onwards cannot be over-emphasised. This ran through the whole British Library saga, and climaxed in the superb Pallant House Gallery, Chichester: a final flourish.

Wilson was a deeply inspiring teacher and colleague to those who knew him. To those outside this loop, he remained something of an enigma, like perhaps Rafael Moneo, Álvaro Siza Vieira or Sigurd Lewerentz. The wonder is that what he referred to as his 30 years war (in fact it was 35 years altogether) over the British Library development and execution to completion, did not seem to perceptibly embitter him. A remarkable, Anglican stoic, he preserved an equanimity coupled with an iron constitution. Two years ago, this writer, as one of the invited participants at the Alvar Aalto Symposium in Finland, saw him springing up the granite lakeside slope to revisit Alvar Aalto's superb lakeside experimental house at Muratsalo, arriving in the lead. That was typical of his whole life.

It is sad that he couldn't add the last word to Roger Stonehouse's exemplary book, but it was just too late. This book is a vital documentation for all libraries, and for architectural historians, architects and students. Above all it helps to consolidate, as well as his reputation, the lasting influence into the 21st century of those great 20th century architects whom Wilson nominated as reflecting 'The Other Tradition of Modernism', of which he is now a key part himself. 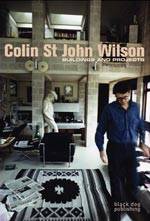