As the city holds the 2020 Olympics, architects and artists including Kazuyo Sejima, Terunobu Fujimori and Yayoi Kusama have designed pavilions to show visitors Tokyo’s cultural side, both old and new 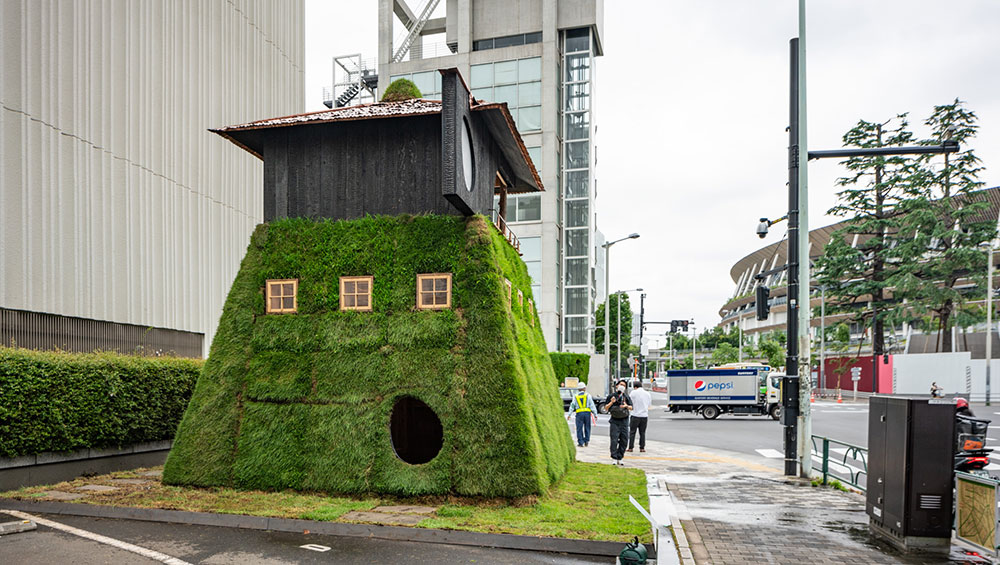 Pavilion Tokyo 2021, part of the Tokyo Tokyo Festival, is a city-wide event taking place as the city hosts the Olympic and Paralympic Games. Nine temporary pavilions, designed by six Japanese architects and two artists, have sprung up within a 3km radius of the Kengo Kuma-designed New National Stadium, in an event organised by the Tokyo metropolitan government, the Arts Council Tokyo (part of the Tokyo Metropolitan Foundation for History and Culture, the executive committee of Pavilion Tokyo 2021 and the Watari-um Museum of Contemporary Art. Visitors will be able to walk around and explore the pavilions, giving them the chance to experience the cultural and architectural scenery of contemporary Tokyo, in districts such as Aoyama and Yoyogi in Shibuya, as well as areas retaining historical features. With architects and artists given carte blanche over the location and concept of the pavilions, each is a projection of the creator’s vision of Tokyo old and new.

The architect Terunobu Fujimori’s pavilion, Teahouse “Go-an”, meaning five huts in Japanese, stands in Shibuya, just across from, and in dramatic contrast to, the colossal New National Stadium, which was built to host the Tokyo Olympics 2020. The 2.7 metre x 2.7 metre teahouse is made from burnt cedar wood – traditionally, the wood was burned to help preserve it – and covered with grass. 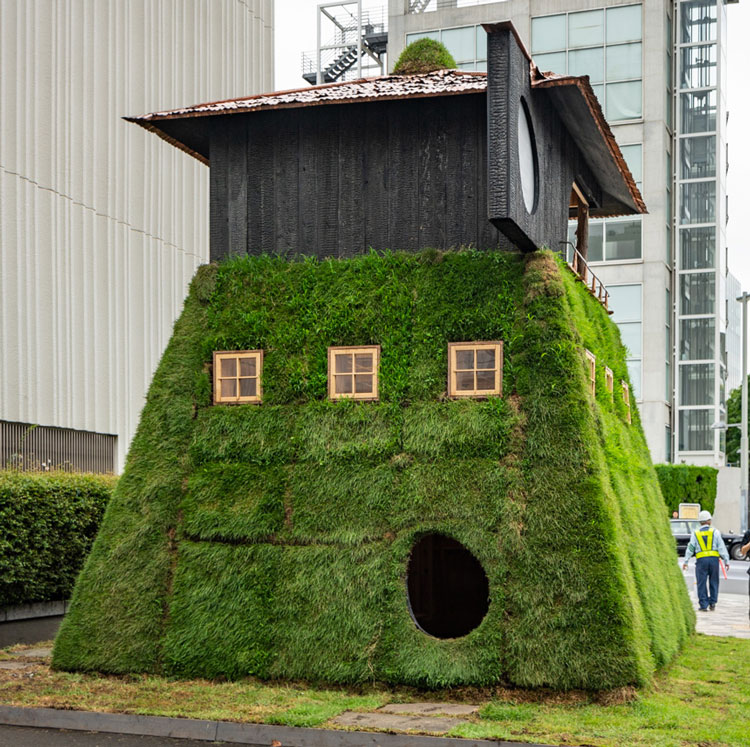 Fujimori built a teahouse because it is symbolic of Japanese architectural typology conceived more than 400 years ago and still used today. He chose the location to contrast it with the New National Stadium, which epitomises contemporary Japanese architecture.

Fujimori is no ordinary architect. He is known internationally for creating unique “floating” teahouses perched on tree trunks, 6 metres above ground. For this event, he built a double-height structure at ground level. To reach the tearoom itself, visitors must climb a ladder to the upper level, which commands a panoramic view of the stadium. The materials and techniques Fujimori has employed here are typical of his architecture: the burnt cedar and stucco ceilings are primitive techniques used in traditional Japanese houses. Now that the Covid pandemic means no audience will be allowed in the stadium to watch the Olympics, sitting in the teahouse may be the best way to feel the atmosphere and energy of the Games. 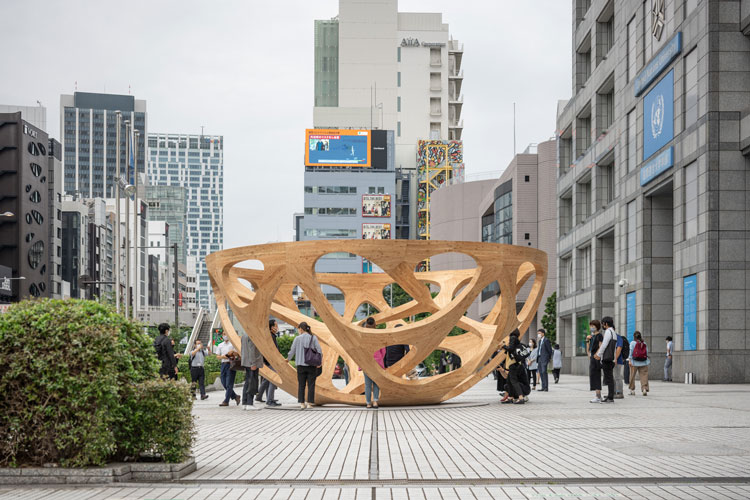 Nearby, in front of the United Nations University, the architect Akihisa Hirata has created Global Bowl, a porous structure shaped in the form a bowl. He used a traditional material, wood, but employed hi-tec CNC (computer numerical controlled) machines to cut it. Hirata envisioned a place where people coming to Tokyo from all over the world for the Olympics could enjoy gathering. People are invited to crouch, sit or lie down in the curvaceous structure. Hirata chose the venue for the pavilion, which faces a busy crossing, to convey this vision of people gathering. As with many of his works, the porous structure blurs the boundary between outside and inside. “Defining and confining certain spaces will limit people’s intuitive demeanour. Animals move around carelessly about defined spaces. My intention is to allow a tangling space [which he calls Karamari shiro],” he said. 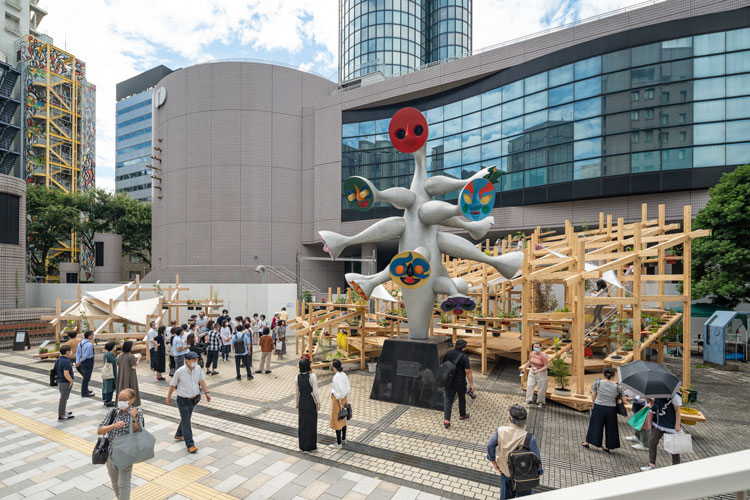 Adjacent to Hirata’s Global Bowl is Street Garden Theater, created by Teppei Fujiwara. The structure provides beams on which to display flowerpots as well as doubling up as street furniture for people to sit on. The architect took his inspiration from the Japanese tradition of decorating the front of one’s house with flowerpots, which began several hundred years ago and is still in evidence today. Fujiwara said: “More than ever in the past year, I think people the world over took pleasure in growing plants and taking care of them. My intention is to rethink our close relationship with plants, which can bring happiness.” 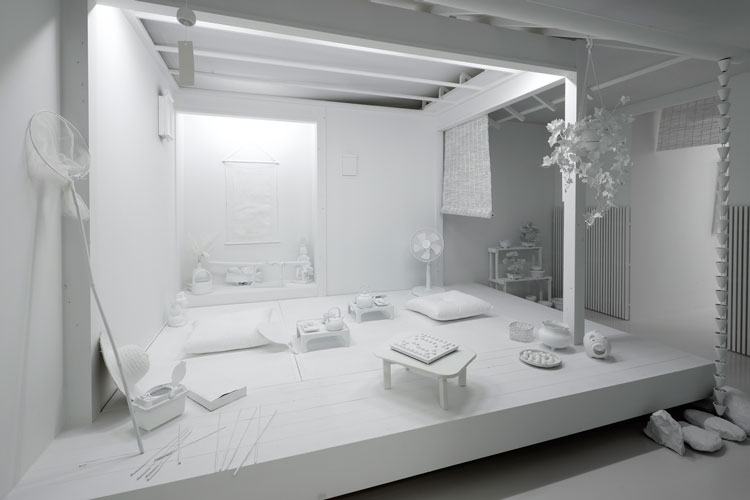 Within walking distance from Street Garden Theater is the Obliteration Room by the artist Yayoi Kusama. She has created an all-white installation at Shibuya City Office with visitors invited to stick colourful polka-dots on any item or surface of the room. The artist has been pursuing the Obliteration series of work since the 1960s, when the first Tokyo Olympic Games was held. 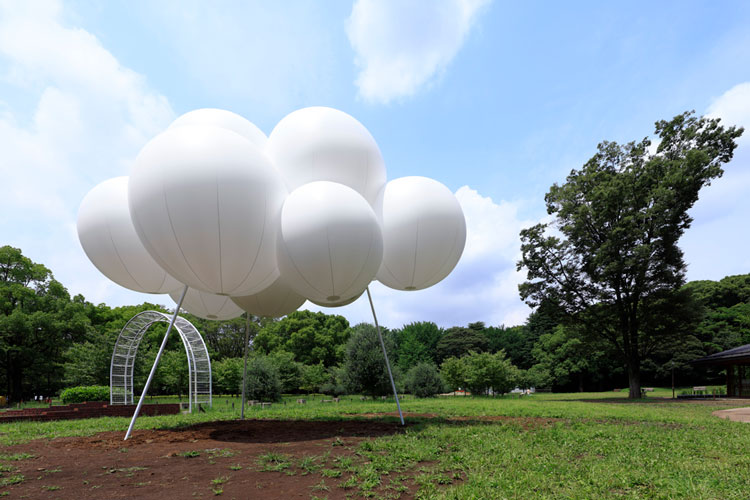 The architect Sou Fujimoto’s Cloud Pavilion is installed in Yoyogi Park, formerly the site of the Olympic village during the 1964 Tokyo Olympics. The balloon structure is in the form of clouds, like a huge “ceiling” that floats above and connects the world. 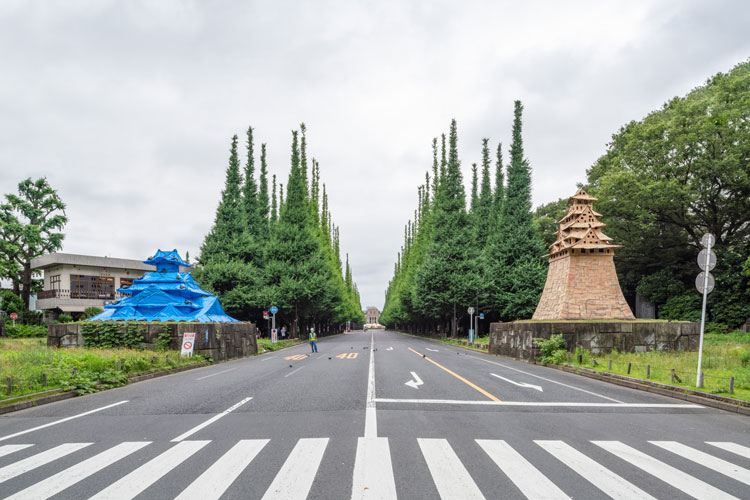 The artist Makoto Aida’s Tokyo Castle is on the promenade of Meiji Jingu Gaien Park, part of the Meiji Jingu Shrine erected to commemorate Emperor Meiji. It consists of two castles, formed to look like traditional Japanese castles, one made from cardboard, the other from blue tarpaulin sheets, both low-cost but durable materials that are often used in temporary structures. These materials evoke the image of shelters made by homeless people, or the tents used in stricken areas. Aida, who has been outspoken in his views about political power and social systems, and whose works have a strong political message, has been highlighting the plight of homeless people since 1995, when the metropolitan government of Tokyo started to get rid of temporary housing used by the homeless. The artist has incorporated cardboard in his work since then. The blue tarpaulin sheets will remind visitors of the many natural calamities that have hit Japan through the past few decades, when these sheets have provided a precious material to protect people from rain and wind. The artist was, and still is, sceptical about the significance of the Tokyo Olympics 2020 in a world where there are many worldwide sports competitions that can honour athletes. He has been critical of all the fanfare that has arisen around the building of the monumental New National Stadium, which cost more than $1.25bn to build. The artist said that, through pavilions, which are nothing monumental: “I wanted to highlight the provisional, something about to collapse, but something that is trying to withstand.” 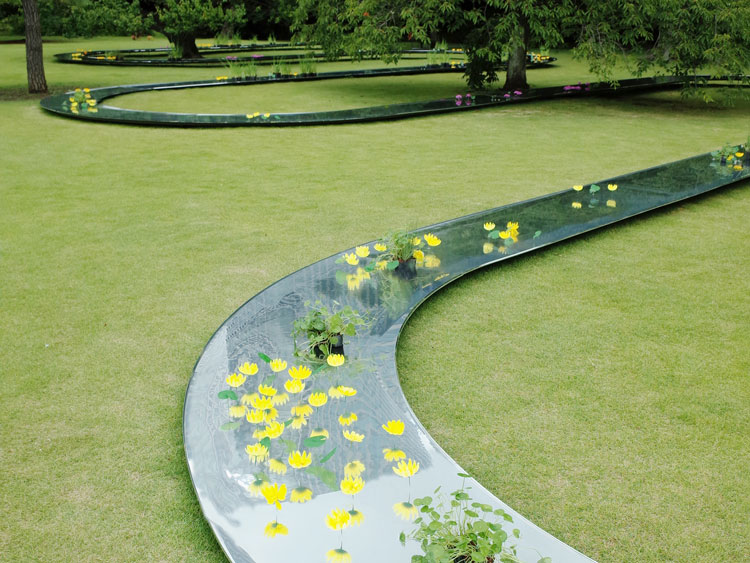 The architect Kazuyo Sejima, who co-leads the architectural practice SANAA and in 2010 was the second woman to receive the Pritzker Prize, chose the historical Hama-Rikyu Gardens for the setting of her pavilion, Suimei. More an installation than a pavilion, Suimei is a curved waterway that meanders through the gardens. As if to blend it into the former daimyo (feudal lord) garden of the Edo period, which has a pond, a duck-hunting site and various water fronts, the architect designed a stream-like structure that floats over the grass. The water reflects the nearby skyscraper office building, thus incorporating the new and ancient Tokyo. “The world is changing, and staying in place. Just like water. If the flow stops, the water will become stagnant. Likewise, Tokyo is always on the move, which we hope will lead to a pure future,” said Sejima. 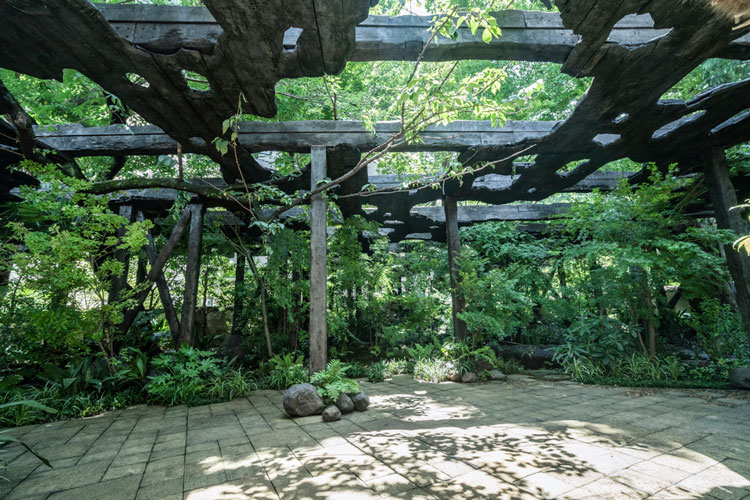 Junya Ishigami chose the former residence of an entrepreneur, built in 1927 and now named Kudan House, as the setting for his pavilion. Kokage-gumo, meaning wooden clouds, is a wooden structure sprawling around the garden of the house. Rather than simply adding a new pavilion, the architect integrated the pavilion into the garden by using burnt cedar wood to give the feeling that the structure has been there since the residence was built almost 100 years ago. Voids created by the structure allows the sun to filter through, while it shades out the view of the high-rise offices that surround the house. 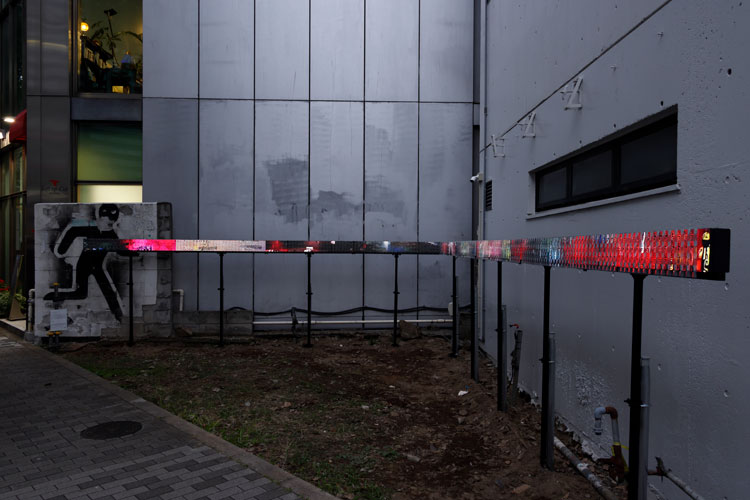 The artist collective Daito Manabe + Rhizomatiks presents 2020-2021. Referencing the fact that this event was planned for 2020, in time for the Olympics, but has been postponed to 2021, Rhizomatiks brought together vast amounts of data that were planned for in 2020 but were never realised, and allowed artificial intelligence (AI) to visualise accumulated data in an abstract illuminated form.

The original hope of Pavilion Tokyo 2021 was to give foreign visitors to the Olympics the chance to experience the different cultural aspects of the city. Now that foreigners are scarce because of Covid-19 restrictions, the event has taken on a different meaning. The chair of the committee of Pavilion Tokyo 2021, Etsuko Watari, was brought up around the neighbourhood where the New National Stadium stands and, as a small girl, saw how the 1964 Tokyo Olympics brought energy to the city. “We hope to create a lasting impression on the visitors, although these pavilions don’t serve any purpose in society,” she said.