“People meet in Architecture” was the nebulous banner theme for this year’s Venice Biennale of Architecture and people did indeed, of course, meet all over the place, from dinners at the Danieli to drinks at the Gritti or parties at the Guggenheim garden, that whole seething mass of the pan-international architectural beau monde ajostle and ameeting for four solid days of gala activity.

But this rallying slogan, launched by Biennale director Kazuyo Sejima of ultra-modish practice SANAA, was probably intended to suggest another sort of “meeting” and other sorts of “people” than the designer-spectacled black-clad intellectual elite of Milan or Manhattan. Indeed the granting of the prize for best pavilion to Bahrain, three charmingly rickety old seaside shacks and poignant video interviews with their marginal owners, made overt the two sort of architectures compared and contrasted throughout this Biennale; the local, provisional, handmade structures of “the people” and those imposing (and imposed) buildings by well-known names that we never necessarily ask for but are expected to admire as signature statements of capital-A “Architecture”.

Rather than judging each national pavilion as an aesthetic object, marking it according to intention and execution as an artwork, it is more useful to understand what message they each embody, their unstated agenda and its political implications in the largest sense of that word.

Thus the most obviously governmental of the pavilions was the French, pure embodiment of the centralised state mentality with its emphasis on a technocratic hi-tech bombardment of propaganda for new urban planning, almost a parody of that endearing, unshakeable Gallic belief in “progress” and “modernity” which seems so old fashioned. With vast screens, cold giant mirrors and cacophony of simultaneous projection, this brutal son-et-lumière left no doubt that all major decisions were going to be made by state functionaries and their appointed “experts” regardless of what anyone else might want. If instead this Pavilion had been given over to a re-creation of just such an official presentation on French town planning from, say, 1969, with motorways through the middle of cities and mass-housing, it would have made clear the methods remain the same even with an absolutely opposite message.

Perhaps the most genuinely daring and surprising choice of any national Pavilion was the American inclusion of John Portman, the ultimate commercial operator, who not only invented the “atrium” as a bestselling trope, first in hotels throughout the world and then office buildings, but also invented the contemporary architect-developer. Portman has practically been a pariah in the profession ever since he made quite so, so much money, lost it all, made it again, and continues at 85 to produce enormous developments all over the globe, especially Asia.

The American Pavilion was curated by the High Museum in Atlanta, where Portman is from and continues to work and where the same institution granted him a large retrospective exhibition last year. Clearly Portman is very “supportive” of the museum and his inclusion here, tucked away in a side-wing, might imply the museum felt obliged to honour this, ahem, “support” whilst somewhat embarrassed at proposing quite so all-American a figure of absolutely unabashed commercial ambition.

It would have been bolder to give the whole Pavilion over to Portman, making a statement that this is indeed one sort of “architecture”, perhaps the dominant one, practiced everywhere all the time, and one which has to be acknowledged, analysed and understood, in order to subvert, resist or improve its assumptions and prerogatives. Indeed Portman’s practice is probably the very threat itself to the fishermen and poor folk of Bahrain whose prize-winning plight is precisely such vast, slick developments that are just too big to even notice their existence.

Intriguingly even Portman’s PR machine has learnt to adopt the language of grass-roots friendly-speak, claiming that his work “demonstrates long-term engagement with and commitment to community.” Likewise we learn of Portman’s “unique model of practice wherein the architect directly engages socioeconomic drivers and responds by purchasing and assembling land …”

Curiously the architect at the Biennale probably furthest from Portman (and the official French Pavilion), anarchist-squatter sculptor Xavier Juillot, also believes in “purchasing and assembling land”, and had done so opposite the Arsenale in order to erect one of his defiant anti-monuments as gesture against the formal establishment. Without actually purchasing this parcel he would have been unable to create his work, harassed by regulatory bureaucracy, whereas as an owner he could do whatever he so wished, and this practical reality, shared by both developer and Dadaist, is one of the unspoken fundamentals of contemporary “architecture” as seen throughout the Biennale. And it is these very overlaps and segues between “Architettura Povera,” as it were, and “Architecture-of-Power” that proved the most interesting.

Thus the British Pavilion curated by the group Muf proposed a beautiful scale model of a section of London’s Olympic Stadium, built not of steel but crafted in wood by local artisans Spazia Legno, who have specifically revived Venetian carpentry, and here re-purposed as a drawing and play arena for nearby schoolchildren.

The Minister of Culture Ed Vaizey in his opening speech insisted that this was a celebration of the Olympics, whereas surely a sly critique of its architecture should be implied by this shift in scale, material and workmanship? In fact Liza Fior of Muf acknowledged that she found the real stadium an impressive and attractive structure, the sort of “shared ground” demonstrated when Sir Norman Foster, (perhaps closest to Portman should one wish to find the “enemy”) said how much he appreciated Muf’s Pavilion.

Likewise the fact that Fior, champion of a community-grown humanism, worked as a student for a series of the largest commercial-developers, from Fitzroy Robinson to YRM, suggests the borders between such “architectures” are more fluid and fertile than first assumed, their meeting and occasional clashing here in Venice surely stirring rich debate for decades to come. 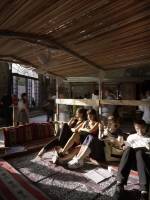 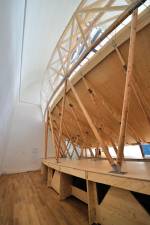