“I have seen what no man has seen before,” declared critic André Salmon on viewing the Cubist guitars of Picasso at his studio in 1912. This notion that important art is new art, something entirely without precedent sprung from the imagination of a genius, is the resilient founding-myth of modernism, and the very opposite of all previous aesthetic beliefs, that the best art was that which was closest, most similar, to great art of the past.

The shocking newness of the work created by Picasso between 1912 and 1914 is very much emphasised by this tight, smart, exemplary exhibition mounted by MoMA and focused entirely on his guitars of this period, whether 3D objets, collages or actual paintings.

The show begins with a corridor of wall texts, in different, attractive typefaces (and for once large enough to be easily read), descriptions of these works by contemporaries who had seen them in situ and immediately recognised their importance.

The two main themes are their extreme originality and absolute fragility; thus Vanessa Bell in a 1914 letter to Duncan Grant prophesied, “Of course the present things are not at all permanent,” whilst Wyndham Lewis in Blast the same year likewise infamously proclaimed: “They do not seem to possess the necessary physical stamina to survive.”

But survive they have, somehow, and the near 70 works gathered here in a single room have also managed, just, to maintain their radical frisson, sense of daring, even if now read as masterpieces of a vanished experiment, relics of a long-won revolution.

That said, the curious and central fact that these works were never publicly displayed by Picasso until the late 1960s, poses several larger, and largely unanswered, questions about their place in art history – thus the crucial importance of those eyewitness accounts of the time, as displayed in the entrance to the show, and period photographs of these works in the atelier. But is it possible that even Picasso considered these things too casual, too fleeting, mere tests and trial maquettes best kept in the studio, and only later, with hindsight, claimed them as actual works of art? This whisper of doubt can hardly be heard amongst the murmurs of admiration they now inspire thanks to advances in our aesthetic taste.

The first object is the guitar assembled out of cardboard around 1913, which, as the label claims, “resembled no artwork ever seen before” and which seems, all things considered, in surprisingly good shape. Likewise, chronologically, the last exhibit is a similar guitar made out of ferrous sheet metal in late 1914, the end of this fertile period. The order of the show is pleasingly chronological and as often with Picasso, who had his own mania for dating, has an unusually detailed chronology, works as closely dated as “December 4 or later”, the very day and month provided.

Both the first and the last sculptural guitar, linchpins of the show, come from MoMA’s own collection and as important donations from the artist himself, just before his death in 1973. This provides a poignancy that makes all the more sense in these straitened times when museums must increasingly mount exhibitions from their permanent collections.

Some of the key works come from MoMA, including, in a small section of non-guitar works, Head of a Man given just last year by Richard Zeilser. Curiously, though, the curators resisted including the famous Glass of Absinthe from Spring 1914, which is on show in the museum upstairs, and has various affinities with the aforementioned picture.

There are also wonderful original vintage photographs of the works in the studio, blown-up on the wall as well, and a very useful didactic explanation of the various techniques and materials used here by Picasso. Of these, foremost, of course, was “collage”, which it is hard to imagine had seemingly never existed before, created for the very first time by Picasso in March 1912, its centenary looming, and now a sprawling genre in itself.

The newspaper collages now appear as elegant and sophisticated as they must have then seemed scrappy and crude, the survival, even legibility, of these ancient slices of cheap newsprint surely miraculous.
Indeed for the print-fetishists amongst us who will even read the morning cornflake packet, they provide amusing traces of another era; “Bucarest -le Prince Héritier est Revenu”, “Les manuscrits ne sont pas rendus”, “Un Chauffeur Tue sa Femme”, or best of all, the story of a soldier who spat out a bullet he had received in the head 26 years before in 1886.

Picasso is loved by curators because he provides the opportunity to pick through his vast oeuvre, to assemble distinct thematic or chronological exhibition essays, but he is equally loved by the art-conservers, for whom he poses unique paradoxes of preservation.

Indeed, this current show could equally well be mounted as a didactic exploration of the technical problems posed by such materials to the science of conservation, problems never posed previously by art works but which have become increasingly the norm.

Thus the lush collage Bar Table With Guitar from 1913 is, as the label notes, “held together with nothing more than pins … and has preserved its improvisatory air for nearly a century”. These same pins seem surprisingly fresh, with no trace of rust, as do other such pins in other works, and one might ponder if they are, in fact, the originals or some cunning replacement minted from the lab.

This exhibition is not only a formal exercise in focused art history, and in the history of the use of material objects, but also a straight shot of visual pleasure, an equal visceral treat for any strolling punter who cannot be bothered with labels or dates.

The show is also, thankfully, for once, as small as it is resonant, suggesting that the “blockbuster” is, with any luck, no longer an institutional obligation. It is also not travelling, which is better for the art works and better for the museum, insisting that anyone who wants to see this impeccably gathered nosegay had better get their skates on and get over there soon.

And the sheer aplomb and pluck (pun intended) of Picasso’s guitars here assembled also recalls the dictum of Jean Baudrillard that all the great cultural innovations of the 20th century had already been made by the dawn of the first world war back in 1914. 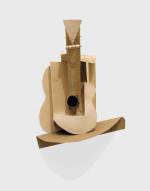 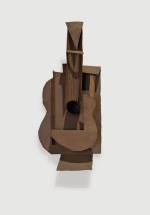 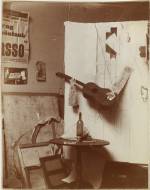 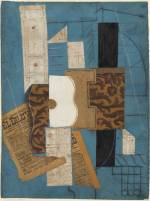