This extensive compendium reaches for a definition of this fundamental process and mental tool available to all architects. Literally “sketch” is both a noun and a verb. And so it is in the hands of all 85 architects whose work is included: in some cases only a noun defines it, in others, proactively and dynamically, it is a verb.

“To sketch or not to sketch?” That is the question today. In the best examples here, it is of course both. The book comes to the architectural arena with perfect timing. Schools of architecture are currently at a point of deciding whether students, on application, should show they can draw, or not. Yet some schools have already abandoned the initial portfolio appraisal. Others never imposed it, and more now wistfully learn to their cost, via the first year student results (and some drop-outs) the price in terms of “how to design”, or not. One of the reasons for manually not “sketching” is the facility of computer sketching. The most successful applications now evidently come from those who apply both manual and computer skills together, and this is revealed here clearly by the examples in the book.

The volume presents itself discreetly, using a typeface for the opening titles that is curiously “retro” of the 1970s. But nothing inside the book is other than deliberate. The workmanlike titling style is retro-techno, in using initial pages that emulate the ancient blueprints (much loved) that disappeared in the early postwar period. (There is even a faint smell of that paper, or is this imagined?) This morphs into a literal explosion of graphic skills. So the opening “prelude” disarms the reader, in order for him/her to pick up the essential provision of what follows. Nor does the work carry much historicist baggage nor get diverted by Po-Mo tendencies. The predominance is both perceptual, and conceptual, with the exception of Alessandro Mendini’s pertinent “fragments”. Thus the 85 cases included contain a full international spread of both distinguished practitioners and a significant swathe of younger, emergent talents.

Perhaps there are two First Elevens? In all cases, it is the utilisation and mastery of building technology, deploying the tectonics and materiality of baukunst that identifies the master players. The value of early, inspirational sketch work still stands as inherent to a successful resolution of the building problematics. In a majority of examples the key move comes with the matching of manual sketch with computerised entablature. Neil Spiller’s description, as Bartlett Professor of Architecture and of Digital Theory is consummate here: Spiller “sketches” by hand on the drawing board, which is visible as the actual base when the images are transferred, scanned as a backdrop to Spiller’s surreal digital world. Spiller actually shows examples from his decade-long research project “Communicating Vessels”, which includes now several hundred sketched drawings aiming to establish a new relationship between architecture, and landscape, space, time, duration and geography. This corroboration perhaps epitomises the fresh exploratory spirit, which underpins the ethos and contemporary achievement of this whole book.

As regards the majority of the younger exponents included in the work Kristofer Kelly, who designed the actual title sequence of the whole, is a highly skilled exponent of the basic sketch drawing: he says he draws, “to understand the world”. A freshly graduated architect from Calgary, Canada, he succeeds in capturing the basic gut reaction to a site, reactions that can become design interventions, but are then sketches beyond recall, “the idea of the thinking hand” is his way to describe the process from the initial spark of the idea or concept, indeed to be archived as such. Will Alsop says he can sit in his studio on the Norfolk coast on a Saturday morning and “find something on a large piece of paper. The feeling that you get is almost as good as having finished a building. It’s not about designing something, it’s about discovering what something could be”. With Alsop combines both a superb colour sense, but also a profligate skill in sketching up initially intuitive solutions into the building proper.

Perhaps his most outstanding building to date in this respect has been the Hotel du Departement at Marseilles in the mid-1990s. In his open competition win (Foster was runner up) against 135 other entries is proven vindication of the sketchbook.1 All this is born out philosophically in Juhani Pallasmaa’s The Thinking Hand.2 But no less than by the explicit sketches that form a composite part of Norman Foster’s own methodology.3 His practice partner Narinder Sagoo here emphasises in the Introduction to the book that it is a spurious idea that all architects think through drawing. “It is such a personal endeavour that many people never try it”. Also emphasised in the introduction that is the “investigative journey” traced in this book today all the more pertinent. This is all the more evident in Sagoo’s own submission to the book, sketches for Beijing Airport. Here too is an intriguing prospect unusual for an airport the inclusion of a Forest Retreat for the relief of passengers.

Unlike many architects Ken Yeang’s “green” example also demonstrates the extent that an architect can prioritise those green elements available to many projects as in his idea for the Dubai Crescent Islands. Rafael Vinoly significantly claims that most of what he builds looks like the original sketch made. This because they are “born of a clear concept, an idea that has come from thinking and listening to what my mind, memories, and sketch pad are telling me”. It is worth remembering the extent to which Alvar Aalto could issue rapid thumbnail sketches on site for the elucidation of the contractor, presumably later formalised in the contractual drawings (maybe not).

The compendium succeeds in reaching a consensus about the value of the initial conceptual process, drawn out in a sketch form that reflects the broad international constituency of ages and skills from which the examples are selected. The methodology of selection is not elaborated upon by editor Will Jones but it may indeed have, for authenticity, contained random elements to emphasise the broader message of freedom of thought and of execution that characterises the design process in the 21st century. 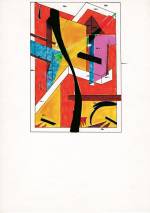 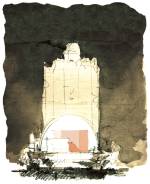