V&A Dundee opens: a monumental structure that aims to take the city under its wing

V&A Dundee opens: a monumental structure that aims to take the city under its wing

Kengo Kuma has delivered a new landmark in the V&A Dundee. It is a craggy sculptural structure inspired by the city’s shipbuilding past and Scotland’s rugged cliffs, which Kuma hopes will reconnect the city with nature. Inside, he has crafted an interior of warmth and welcome. But has he delivered a ‘living room for the city?’

There is no denying the brooding presence of the Japanese architect Kengo Kuma’s V&A Dundee, as it juts into the wide and glittering River Tay. Whether viewed from the streets or the riverside, the craggy facade, the vigorous, upward-spiralling dynamism of its two inverted pyramid forms, the choreography of concrete panels as they stack and slide up the curving facades, like a splayed pack of cards, is decisive, monumental, elemental. It is so manifestly the building inspired by the wild seas and cliffs of northern Scotland that Kuma intended.

V&A Dundee, Scotland. Foyer, looking back towards the entrance. © HuftonCrow.

But when you arrive inside the building – as the world was finally allowed to do this month – it is not quite what you expect. This quietly moody sculpture turns into something light, bright and almost homely. There is a slightly off-kilter, office-like quality about the white wall that sweeps to the left of the entrance, framing the reception desk; not to mention the long, pale ceiling panels that stretch high overhead, which carry a less than aspirational echo of the once-ubiquitous fluorescent striplight (even though they are, as it turns out, an innovative solution to provide the best natural air and light quality via the building’s roof rather than punch vents into the integrity of its sculptural skin). 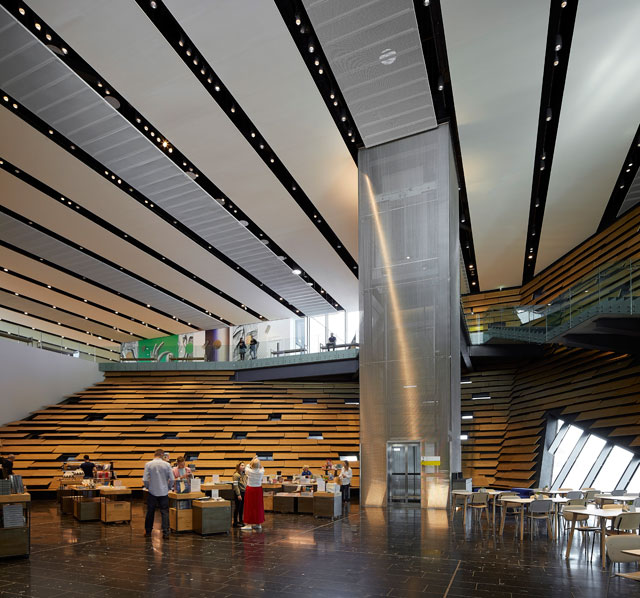 There is certainly drama in the warm, oak panels layered up the steeply sloping walls, their angles sometimes smooth, sometimes ruffled, like feathers disturbed by the wind. But the scale that so impresses from outside feels substantially reduced, and the eye is drawn instead to a kitchen and cafe counter, extending across the shiny, fossil flooring. Here, large white tables are liberally strewn, with wooden chairs that invite you to take a pew, have a cuppa. It is as if what looked like an elite opera house has revealed itself to be a cheerful (albeit ambitious) community centre. But perhaps that is Kuma’s intention: his oft-quoted aspiration for the V&A Dundee is for it to be “a living room for the city”. And this small city, with its history of proud engineering innovation and exploration followed by post-industrial blight, must take pains to make absolutely everyone feel included - from the articulate minority of culture-vultures to the children who have grown up in a climate of widespread unemployment - in order to justify its £80.1m price tag, not to mention the £1.7m the Scottish government has just announced in subsidies to help the V&A Dundee meet running costs. 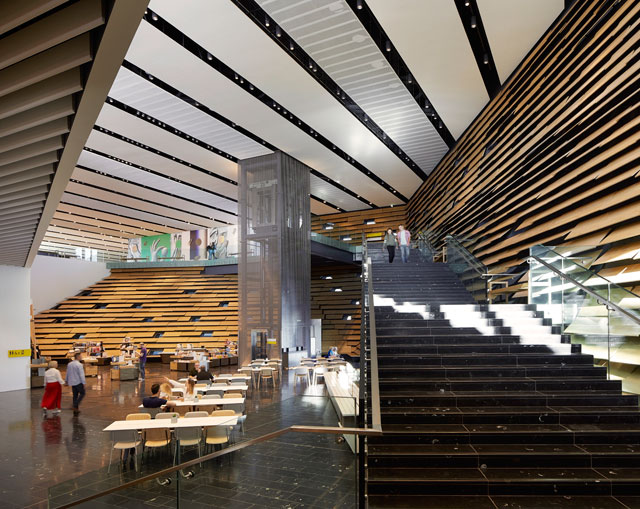 As to Kuma’s living-room ambitions, certainly, the longer you spend inside it, the more at home you feel. The ground floor is a very interior space – which is also part of the initial surprise. For a building that, on the outside, engages so profoundly with its riverside setting, there is only one small glimpse of the water here: a triangular slice cut from one of the concrete walls, which abuts a small soft-seating area in the far corner. 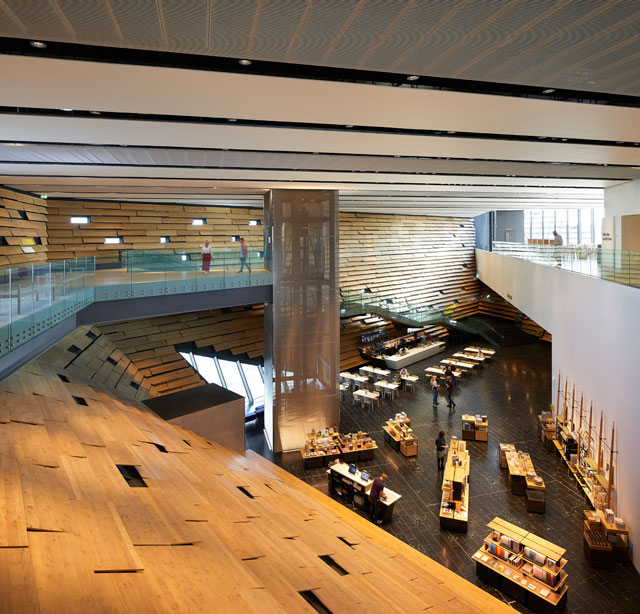 The really impressive views only unfold as you ascend the angular glass, steel and black marble staircase, starting with glazed perforations in the wall, which frame the Tay at intervals, then blossoming into the top-floor panorama. This extends in one big, sweeping, circular gesture, embracing the city, the sky and the sea – and also, over the glazed balcony, the central public space, finally revealing the scale and activity of this generous indoor piazza. A truly spectacular vista is offered by the first-floor restaurant and terrace, where full-height glazing gives views of the riverscape in all its glory, especially its nearest neighbour, the RRS Discovery: this famous, wooden-masted ship, now a popular visitor centre, was built in Dundee for Antarctic exploration, and its maiden voyage, in 1901, took Robert Falcon Scott and Ernest Shackleton on their first, successful journey to the Antarctic. 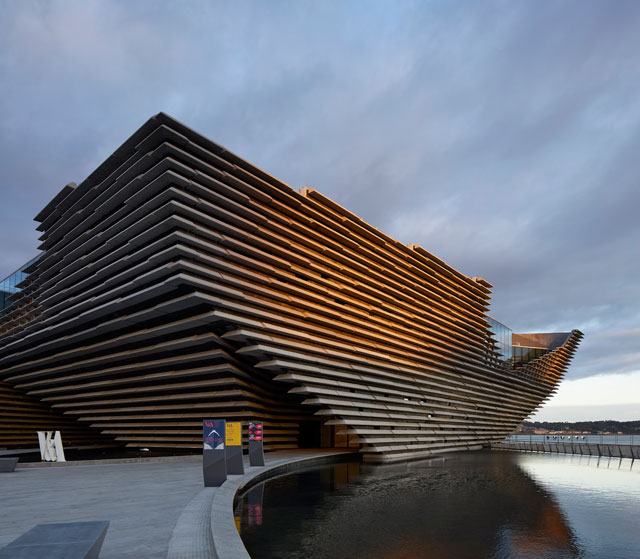 Everywhere along the ascending route – as throughout the building - there are multiple alcoves with wooden benches or soft-seating areas, while low, oak ledges stretch out along the wood-panelled walls; an integral, sculptural perch. It is very much an inhabitable, interior cliff. In an interview for the V&A Dundee’s commemorative book, Kuma talks with the museum’s director of programme, Sophie McKinlay, about the 21st-century museum as “a space where people can spend time in a more casual way. People can sit, have a coffee, work, sleep, play. This is why the cafe, shop and public seating in the building are all shared.” The lavish use of wood is integral to conveying warmth and welcome, he says, and the panels’ dimensions and placement are strategic in reinforcing the human scale. 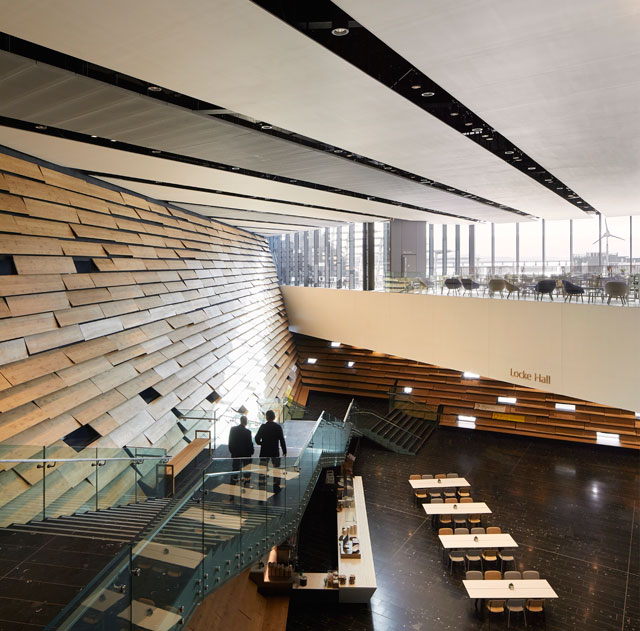 V&A Dundee, Scotland. Stairs with view through to restaurant. © HuftonCrow.

In its highly sociable programming, the building reminds me of Tate Modern’s most recent addition, the former Switch House (now Blavatnik Building), with its wooden floors and seating on every staircase and landing. But it also reminds me of the Maggie’s Centre typology: the pioneering, bespoke, architect-designed cancer centres that offer comfort and counselling on hospital sites (mainly around the UK), prioritise a prominent kitchen table, thoughtful seating options, and free availability of teas and coffees. And, it turns out, Kuma has twice visited Dundee’s Maggie’s Centre: Frank Gehry’s cosy, croft-style gem, which nestles into the landscape at Ninewells Hospital. That sense of being gently taken under its timber wing comes to mind here, with the undulating wood-panelled walls and the quiet lure of this building’s multiple nooks and crannies. 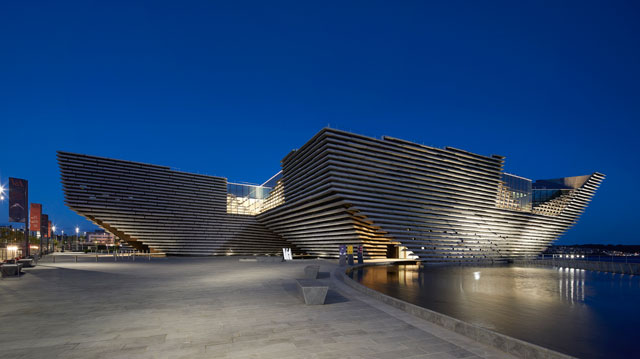 The exterior – set in a new stretch of public riverfront, part of an ambitious waterfront masterplan – is also about sociability. Kuma has talked of this building’s kinship with Japanese houses or temples, whose overhanging eaves create a kind of semi-covered outdoor space that encourages gatherings. The public spaces around the exterior are also intended to galvanise engagement, as much as the interior spaces. 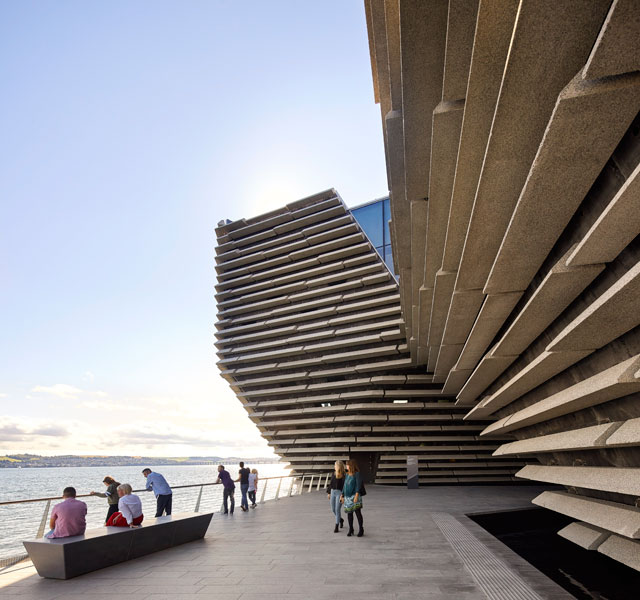 There is a nice symbolism in the open, cave-like arch at the core of this structure – a jagged, triangular hollow created below the point where the two inverted pyramids, twisting at their centre, connect to support the upper galleries. Kuma, speaking at the opening, talked of this arch as a key element. Eight years ago, he said, when he visited the city to dream up this competition-winning entry: “The city and nature were separate. It is a typical situation, but I thought the city and nature should be integrated. That kind of new relationship was the core of our design. What we try to achieve is to create a gate for the connection between the River Tay and the city.” 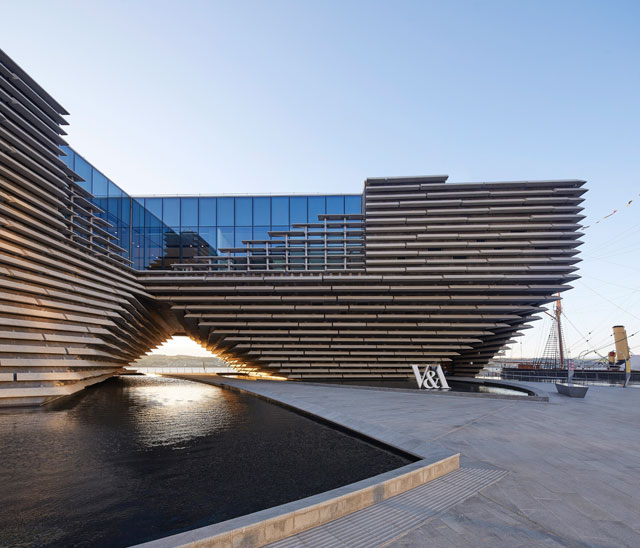 In this symbolism – as in many other aspects – this building works as an inspiring piece of sculpture. But it is also an extraordinary feat of concrete engineering. When Kuma drew his first, cliff-like sketches, nothing like this had been built before. The exterior walls twist both horizontally and vertically, in order to summon associations with the curve of a wave or the hull of a ship. Arup, the engineering partner from Kuma’s first competition proposal, had originally planned these walls as slabs of 60cm thick concrete, with huge pieces of steel inside, which risked conjuring a much heavier, more leaden structure. But through experimenting with 3D models and sophisticated software, it was able to halve the concrete’s thickness and replace the steel skeleton with thinner, reinforced bars. To ensure that the construction team could build at these crazy angles and make all the components to the exact specification – including the 2,429 individually precast concrete panels that give the exterior its rough, cliff-like quality – a 3D model of the entire building became a vital co-ordination tool between architects, engineers and BAM’s Scottish construction team. 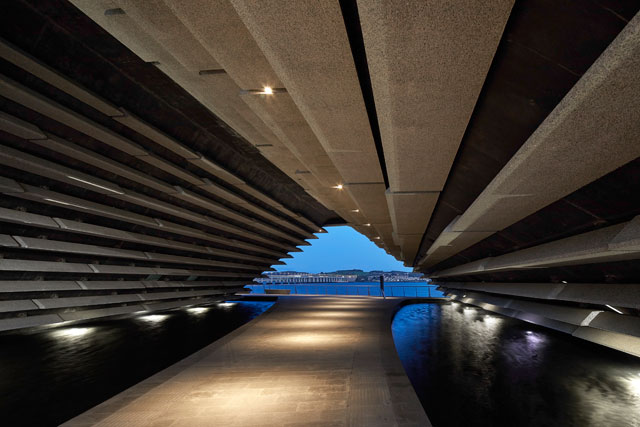 To situate the building right on the river’s edge, a cofferdam (a temporary watertight structure) was constructed from 12,500 tonnes of stone, so that the team could pump out the river water, reclaim part of the riverbed and facilitate an access road around the perimeter. Construction then began, comprising the in-situ pouring of 21 separate concrete wall sections – almost none of them straight. With the concrete panels in place, the cofferdam was removed, so that the front of the V&A could emerge, ship-like, from the riverbank. Meanwhile, shallow pools of water, set against black surfaces, surround the base, augmenting the shifting light patterns that illuminate the craggy exterior. 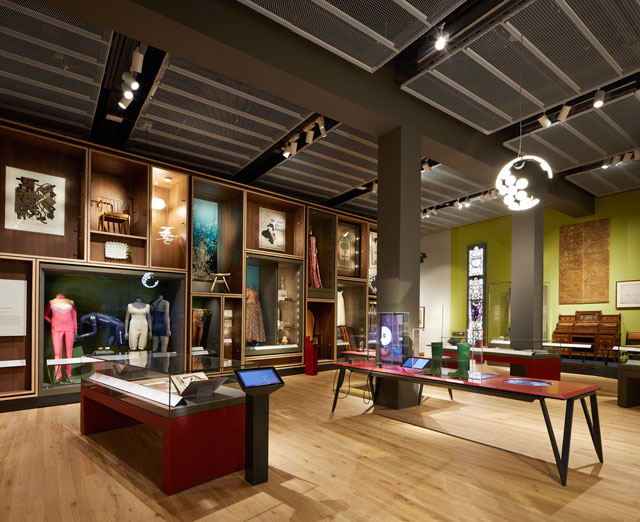 So what of its contents? The exhibition spaces are impressive, and beautifully executed. The Scottish Design Galleries contain 300 treasures, many of them drawn from the V&A’s collection (there were 12,000 Scottish pieces of design to choose from) or borrowed from galleries and collectors all over Scotland. Highlights include Charles Rennie Mackintosh’s original Oak Room, built for Miss Cranston’s tearoom in Glasgow, but stored away for the past 50 years. Nicely themed in ways that demonstrate the value to society of good design, from textiles to architecture, from biomedical engineering to comics (the DC Thompson publishing house, creators of the Beano, still thrives in Dundee), this gallery will be free to visitors, and permanent, albeit with regular content refreshments. 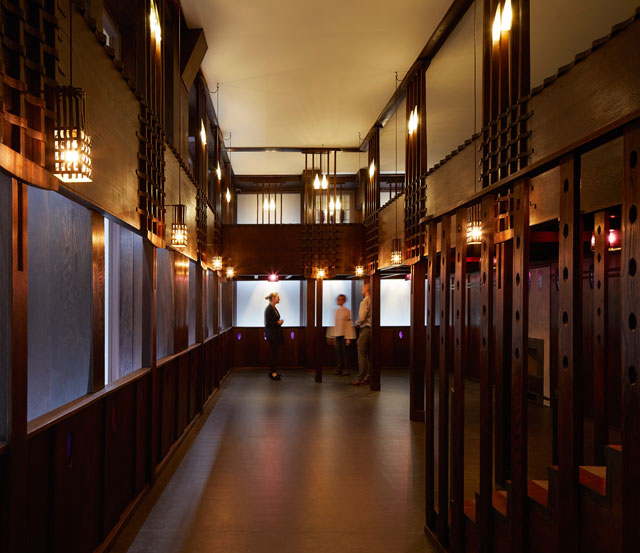 The other gallery, a column-free hanger of 1,100 sq metres, currently houses the Ocean Liners exhibition that was previously at the V&A in London, although apparently much better displayed here; the largest museum-standard space in Scotland, this gallery will feature not just the V&A’s choicest exhibition offerings, but also international touring shows, as well as providing the opportunity to stage its own Scottish-sourced shows once a year.

Education and outreach are a central part of the programme, and there are ample opportunities for the wider community to engage with Dundee’s enviable creative and tech talent; it is already home to one of the UK’s leading art schools (Duncan of Jordanstone College of Art and Design), one of the pioneering universities in computer game and software design (Abertay), an award-winning theatre (Dundee Rep) and an impressive and thriving contemporary art and cultural centre (Dundee Contemporary Arts). The upper floor houses a suite of learning spaces, a designer-in-residence studio, and a multipurpose auditorium for conferences, design jams and events.

Kuma told McKinlay: “The building needs to be central to the daily life in the city and not just a place to look at design.” And it looks as if all the necessary tools are here to provide exactly that richness of use and occupation, as well as attracting a growing multitude of cultural tourists, local, national and international. It remains to be seen how well the city and its citizens will take this tool to their hearts, but there was a palpable support for, and excitement around, its opening. There is, however, a widespread feeling of concern at the quality of buildings that will end up surrounding the V&A Dundee – there are more than 50 hectares of brownfield site up for development around it; the multistorey office block that was under rapid construction just metres away from its front door doesn’t bode well. But Kuma described Dundee’s as “one of the most interesting waterfront projects in the world”. This is no Guggenheim Bilbao, as Kuma took pains to point out to the assembled media when the inevitable Guggenheim question came up: “The Bilbao project is very different,” said Kuma. “Bilbao is a shiny monument. The building itself tries to draw the interest of the people. With this project the (aim) of the building is to draw people to the river and then the goal is to reconnect nature with the city. Both are very important cultural projects, but the approach to site is opposite.”