Research into dwellings of the future is under way in Hokkaido, the most northerly island in Japan, where the harsh winter climate can see temperatures fall to below -30C

Spread over approximately 184,000 sq metres of land that was originally a race horse farm in Taiki village, the experimental dwelling community Memu Meadows includes an academic research centre with accommodation, a sauna, an indoor tennis court and six experimental houses, the “Même”, the “Bamboo-frame House”, the “Barn House”, “A Recipe to Live”, “Horizon House” and “Nest We Grow”.

The project, which was set up in 1992, is run by the LIXIL Foundation, founded by Japanese building materials and housing fixtures company LIXIL, and has been exploring sustainable dwelling and solutions for future living. To realise this, the foundation has enlisted the renowned Japanese architect Kengo Kuma as a collaborator.

Kuma and students at the Institute of Industrial Science, the University of Tokyo, where Kuma teaches, first experimented in 2011, designing and building the prototype house “Même”, the first in the Meme Meadows series of innovative residential design solutions for extreme weather conditions. From the outside, the house is similar to the vernacular style found in Hokkaido. It has a floor area of 79.5 sq metres and is built using a timber frame with mortise and tenon joints. Employing the carpentry traditionally used in Japanese house-building would allow local people to easily work on their own house.The architect envisioned the house as a structure wearing fabric, so the entire house is wrapped in a double-skinned translucent covering designed to protect it from the severe weather. The exterior wall is clad in a fluorocarbon-coated polymer covering, an elastic material sometimes used on the roofs of train stations and bus terminals, which can withstand harsh weather conditions. For the interior, Kuma used strips of silicone-coated fibreglass cloth running up the wall to the ceiling, each strip stuck to the next with a fastener so that the strips can easily be removed if they need to be renewed. Between the inner and outer layer, inserted into the wooden frame, is a polyester-fibre material made from recycled PET bottles that provides insulation.

During winter, heating is provided by hot-water pipes that run all the way through the house along the floor in the 10cm void between the exterior membrane and the interior covering. This heating system is equipped with geothermal heat storage, allowing the heat to circulate between the membranes, improving the insulation performance of the walls. Fluorescent light tubes also run along the floor in the 10cm void, providing the house with its the main source of lighting, making Même resemble a large illumination, rather like an oversized lantern. To test its viability, Même is equipped with multiple sensors that automatically measure seismic data and the thermal environment for the purposes of long-term data monitoring.

Visitors can stay overnight at Même by appointment. It has a double bed, a highly advanced wash toilet, bathroom, kitchen, communal space and den. After testing the comforts and disadvantages of the experimental house, visitors are asked to give feedback to the LIXIL Foundation. As the walls are entirely covered with translucent membrane, visitors will be enveloped by the moonlight and sunshine. In summer, the house will be filled with sunshine at 5am, making sleeping-in impossible, and will become extremely hot during the daytime, all of which will have to be taken into consideration.

The competition doesn’t end with the design of the house being realized, as they are an ongoing project. The house is an environment that changes over the years, adapting to, and influenced by, the surroundings in which it is built. Students from Keio University regularly fly over to visit their Barn House – a stable and residence under one roof, envisioned as a co-habitat for humans and horses, incorporating the horse-raising culture in the area. Students visited in July to see how compost from horse manure can be used as alternative energy source in the future.

On the other hand, the Harvard students designed the Horizon House as a dialogue between the living environment and the local landscape. The monolith-like building commands a 360-degree view of the surrounding landscape from the ground floor and the loft-level area, allowing residents to be in touch with the ever-changing nature all year around.

There are few houses nearby, but as a house needs to be part of the community, Memu Meadows and the architectural students occasionally organise gatherings with local people in Taiki-cho to hear about the traditions and the customs of their lifestyle. All the data collected from the experimental houses and experiences will help architectural students, architect Kengo Kuma and the LIXIL Foundation to continue to develop houses fit for the future. 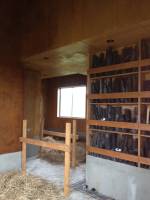 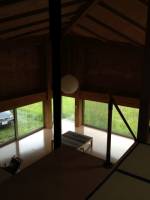 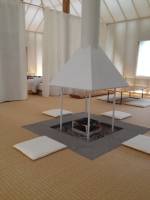 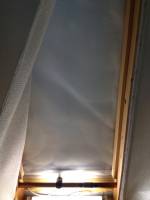 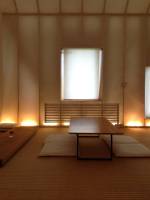 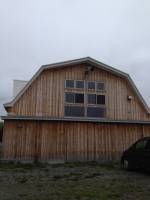