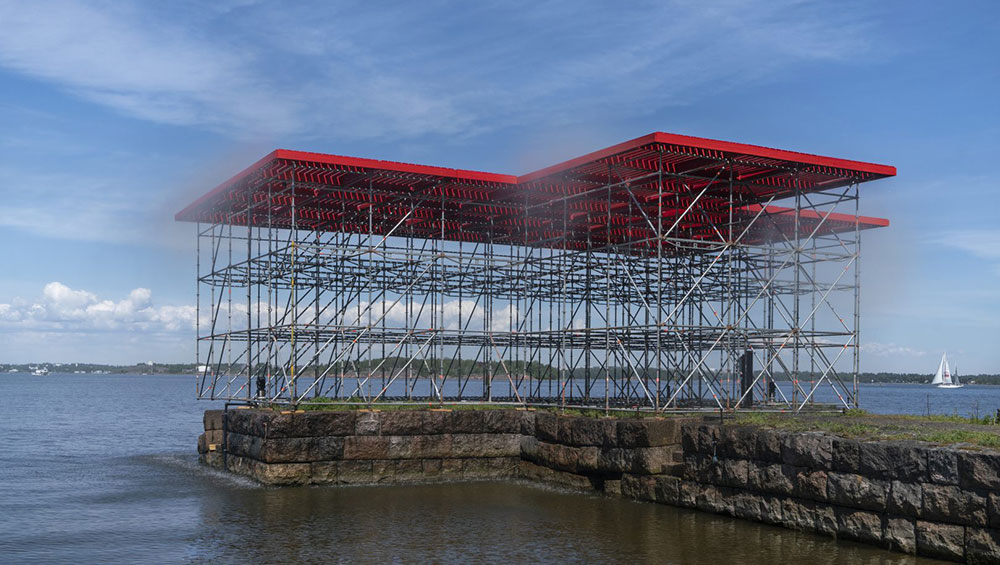 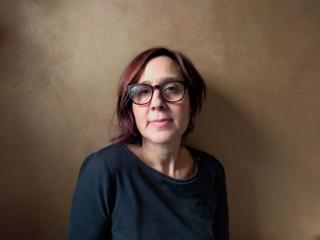 Phyllis Christopher – interview: ‘We had come out, people were dying, we had nothing to lose, so we just wanted to have the best party’
The photographer talks about her coming of age in 1990s San Francisco, where, despite the Aids crisis, lesbians, in the post-lesbian feminist era, largely wanted to come together, have fun and create visibility. 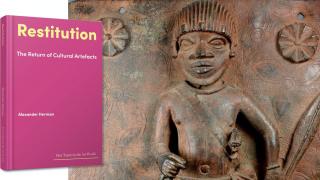 Restitution: The Return of Cultural Artefacts – book review
As western nations increasingly give consideration to the repatriation of stolen artefacts, cultural heritage law expert Alexander Herman takes us on a fascinating tour of the legal, ethical and political issues involved  . 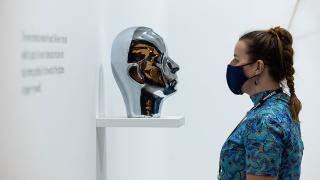 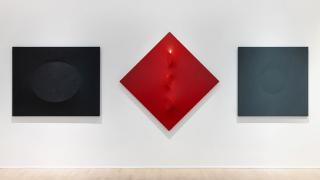 Turi Simeti (1929-2021): A Homage
A tribute to Turi Simeti presents an encapsulated overview of a major figure of Italy’s postwar avant-gardes. 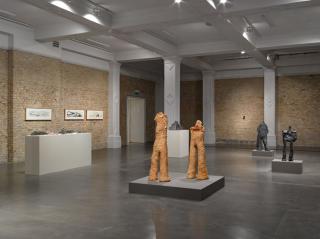 Simone Fattal: Finding a Way
This is a staggering show, dominated by five unsettling figures, whose abstraction echoes the artist’s explanation that they are embarking on a journey of transformation.

Christen Sveaas Art Foundation: This is the Night Mail selected by Ida Ekblad
Images of dramas, dreams and moonlit dinners await visitors at the Whitechapel Gallery, in an exhibition imagining a journey on the most enchanted of night trains. 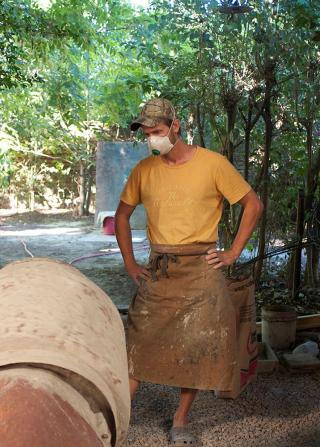 Adam Jeppesen – interview: ‘I embrace imperfection’
The Danish artist talks about why he left documentary-making to make art, the project that took him from the north pole to Antarctica, and the thoughts behind the work in his latest show, his first solo exhibition in the UK. 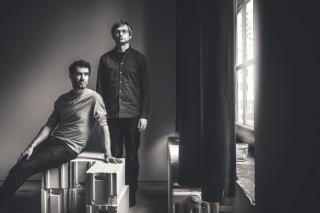 Gijs Van Vaerenbergh – interview: ‘We are always experimenting with the extremities of architecture, space, sculpture and form’
The architecturally trained duo Arnout Van Vaerenbergh and Pieterjan Gijs talk about their collaborative practice, and how they seek to create new experiences for themselves and the visitor. 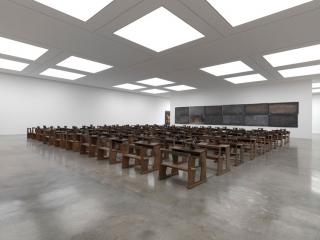 Ibrahim Mahama: Lazarus
Through sculptures, installations and film, the Ghanaian artist repurposes objects from colonial and post-independence to show the impact failed companies and crumbling infrastructure have had on the people of his country. 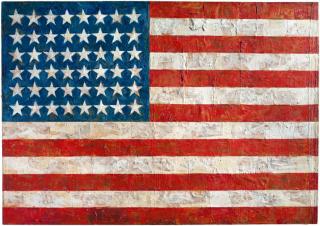 Jasper Johns: Mind/Mirror
Last of the last, with Baldessari gone, of the great philosopher-artists, Jasper Johns is taking a twinned victory lap around two major museums in a bifurcated retrospective that confirms his place in the pantheon. 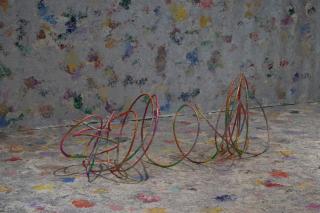 Mit Jai Inn: Dreamworld
Suffused with Buddhist philosophy overlaid with political overtones, the extraordinary works of this Thai artist can be touched, walked over and, in some cases, taken home for free. 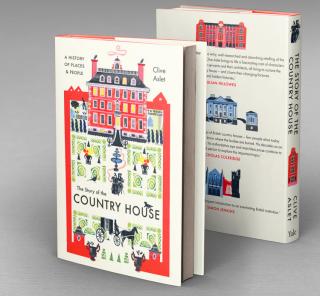 The Story of the Country House: A History of Places and People – book review
From a medieval manor house to a modern-day folly, Clive Aslet whisks us through time and place on a fascinating tour of British country houses.
Annie Morris – interview: ‘All my work revolves around experiences I’ve had. A lot is based on things I’m not comfortable talking about’
Morris, who has three new shows, at Yorkshire Sculpture Park, Frieze Sculpture and Timothy Taylor in London, discusses how personal tragedy and childhood memories feed into her work. 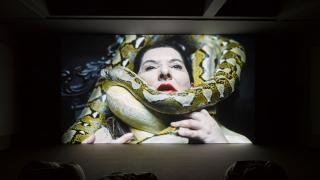 Marina Abramović: Seven Deaths
Abramović channels her passion for Maria Callas into a film in which she reinterprets seven death scenes from famous operas, and seven unusual alabaster sculptures. She explains how the Greek opera singer’s life has fuelled her art. 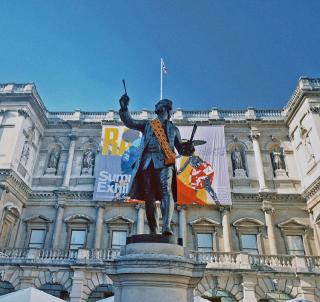 Summer Exhibition 2021
Yinka Shonibare has transformed this annual event into a paean to diversity, bringing work from the invisible and marginalised alongside that of amateur artists and academicians. 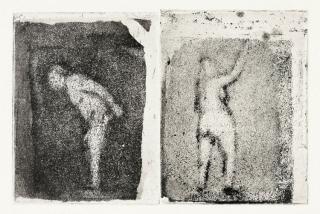 Peter Freeth: 40 Years of Aquatints
Peter Freeth’s atmospheric etchings speak of mortality and human frailty with a poignant nod to the impact Parkinson’s disease has had on his life. 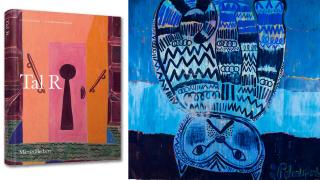 Tal R by Martin Herbert – book review
This book is essential reading for all lovers of painting and contemporary art and culture, shedding light on the ideas and methods behind Tal R’s enigmatic works. 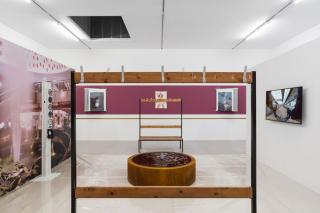 Adam Farah: What I’ve Learned from You and Myself (Peak Momentations/Inside My Velvet Rope Mix)
Farah creates a shrine to Mariah Carey in a coming-of-age journey and a sensory world of nostalgia and indulgence. 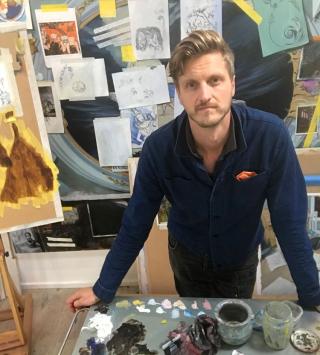 Alastair Gordon – interview: ‘For me, painting and faith are very much intertwined, like the warp and weft of a tapestry’
Gordon talks about the impact lockdown had on his recent paintings, now on show at Aleph Contemporary in London, and his new book, Why Art Matters, which reflects on art seen through the lens of his Christian faith. 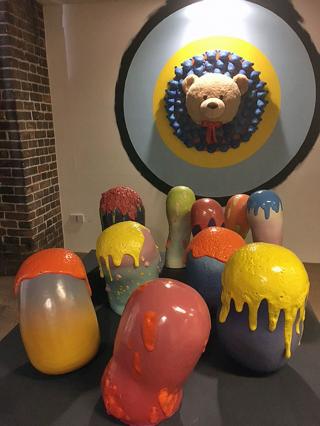