Artist Takashi Murakami has built up a vast collection centred around contemporary art, but also including old Japanese artefacts, pottery, calligraphy and European antiques. For the first time, this exhibition brings some of it to the public view

This is the first large-scale public exhibition of Japanese artist Takashi Murakami’s art collection, which centres on contemporary art. Murakami (b1962) was the first person to receive a PhD in Nihonga (traditional Japanese painting) from Tokyo University of the Arts Graduate School of Fine Arts, one of the oldest art schools in Japan, and is now known worldwide for his polished works, which incorporate contemporary art and traditional Japanese painting, high culture and pop culture, east and west. While continuing to practice as an artist, Murakami has been eagerly collecting objects, now said to number more than 5,000.

The exhibition at Yokohama Museum of Art includes around 1,100 pieces from his collection, which, although mainly contemporary art, also includes old Japanese and Asian artefacts, pottery, historical calligraphies, European antiques, and folk art and crafts. Spread over five large galleries, the exhibition has not been arranged in systematic order, but more with Murakami’s concept of “Superflat” in mind, which involves rejecting hierarchical divisions between artistic genres or eras and freeing artistic activities from definitive boundaries.

The entrance to the museum is set out like a sculptural court. Here, the visitor is confronted by the disturbing sculpture of a wrecked aeroplane, Merkaba (2010) by German artist Anselm Kiefer. Equally provoking is Chinese artist Zhang Huan’s monstrous figure Hero No 1 (2008), which raises the question: “What is art?” Another gallery is filled with Japanese classical art, including calligraphy by the 16th-century feudal warrior Toyotomi Hideyoshi and mid-18th century ink brush painting by Soga Shōhaku, a Japanese painter of the Edo period, as well as many ceramics from various regions in Japan, including Oribe earthenware by 20th-century potter and artist Kitaōji Rosanjin, and even a fabric coffee filter stained with caffeine, demonstrating Muraki’s exploration of everything from Japanese aesthetics to utility items of unknown origin as he wrestles with the question of “What is art?”

Murakami explains: “My collection is the outcome of my personal search for the answer to “What is Art?” I am not clever. If I were clever, I could approach the question analytically and find logic in what makes a single piece of art so valuable and why it commands such  a high price. But I don’t have that skill. To understand why some pieces of art are more expensive than others, why the same art can command different prices over the years, I had to buy art myself. It is an ongoing exercise in which I challenge the history of art.”

Since the industrial revolution, or even before, art in general was seen as being based on western art. Japan, after its modernisation in the late-19th century, aspired to absorb cultures that originated from the west. Until fairly recently, the art market was dominated by western art. To make a living, artists had to be part of this market cycle. These were the issues Murakami faced as he graduated from art school in the late 1980s. Ever since then, he says: “I have wanted to change the game in contemporary art.” Do artists need to make art that is saleable in the art market? Is that what art is about? Are old works of art always coveted more than new works of art? These are the questions that Murakami has been asking himself.

Murakami’s identity as an artist has been as much about collecting art as it has been about producing it. Collecting has been an integral part of his reflection on his identity as an artist. Buying work by Japanese contemporary artists was important in his search for those answers (if there are answers). Murakami’s collection includes works by his peer, Japanese artist Yoshitomo Nara (b1959), as well as works by the Japanese photographers Kishin Shinoyama and Nobuyoshi Araki (both b1940). “Art collection is part nostalgia. Some works that encouraged me show a slice of the emotion I was going through when I just started my career as an artist,” Murakami says. But, importantly, collecting has been an exercise that keeps him continuously creative. “Just a like top sumo wrestler trains himself to keep the sumo art, I need to continuously refine my skill,” he says. Even more, he aspires to continuously reset the standard and create from zero. “Ideally, I want to start creation from nothingness in my mind, to try to get away from all preconceptions that will hinder any totally new idea.”

One gallery at the exhibition is called The World Inside Takashi Murakami’s Brain, and it is arranged like a cabinet of curiosities, where the artist’s collection of antique furniture and lion figurines from Okinawa Island stand side by side with artefacts he has bought at flea markets. The installation gives the viewer a hint as to what has inspired the artist.

His collection is, in a way, a wakeup call for the Japanese art collection system, in which the tax system hinders people from disposing of or donating art. “The works in my collection are blameless. But I, who collected them, am guilty,” Murakami says. Eventually, he says, he wishes “these works to leave the storage facilities of Kaikai Kiki, my company, and make their way over to places where they can be seen by a wider audience. But for the time being, these are works that I have collected as touchstones for my own understanding of art. If you happen to experience some passionate feelings by looking at them, be it nostalgia about a trend from a certain period, disgust at my horrible taste, or tears of joy, I would feel this exhibition was well worth the effort.” 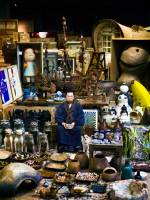 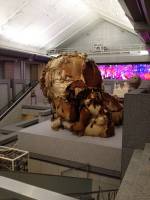 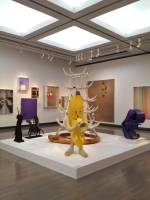