This solo show explores the archives of photographer Shigeo Anzaï, looking at his role in documenting artists making and installing works in exhibitions in Japan between 1970 and 1976, starting with the 10th Tokyo Biennale

Index I traces an exhibitions history of Japan between 1970 and 1976 through the lens of photographer Shigeo Anzaï (b1939). His photographs capture installations, final works and artists in action, creating a wider picture of the art scene of the period. Anzaï was working at a time when artwork was increasingly process-led and time-based, immortalising transient, yet significant moments in art history. Rather than just being seen through the lens of a documentary-maker, Anzaï’s photographs are subjective; angled by his understanding of artistic concepts, his ongoing relationships with artists, and the perspective of an artist himself. He worked to communicate artistic concepts, blending art and documentary photographs and elevating installation shots to the intimacy of portraiture.

Over the past 10 years, the importance of Anzaï’s work has slowly come to be recognised, and has been represented in retrospectives in major art galleries in Japan, including Recording on Contemporary Art by Shigeo Anzaï 1970-1999 at the Osaka National Museum of Art (2000) and Anzaï: Personal Photo Archives 1970-2006 at the National Art Center, Tokyo (2007). The pivotal moment of 1970, the date when his surveys of work begin, was that of the 10th Tokyo Biennale, a starting point that interested Edward Ball, curator of Index: I.

After studying chemistry, Anzaï worked in a research lab, but became interested in art during the 1960s, producing paintings and exhibiting them. Artist Lee Ufan persuaded him to take up photography, and the 10th Tokyo Biennale in 1970  – Between Man and Matter – proved a formative moment. Anzaï was commissioned by art critic and “commissioner” of the exhibition Yusuke Nakahara as a photographer to assist participating artists, including Richard Serra, Carl Andre and Daniel Buren.

Ball sees this period as a fertile time for Japanese art, representing the height of the Mono-ha movement that had begun in the 1960s and explored the relationship between man-made and natural materials. Art was becoming increasingly process-based and performative as a means to investigate these properties, which was one reason why Anzaï’s photographs have become such important documents today, illustrating the spirit of an experimental and ephemeral movement.

Many of the 54 photographs in this exhibition were taken by Anzaï at the biennale. One photograph shows Serra drawing a circle on the ground using a piece of string, inside which he intended to plant a tree. As it turned out, for some unknown reason, this work was not completed. However, thanks to Anzaï’s photograph, it lives on. In another instance, a work by Christo was banned from the biennale by the commissioner, but Christo decided to go ahead with it, draping textiles across the gallery space and down the stairwell. The piece, which Anzaï captured being installed, was in existence for only 30 minutes. Anzaï’s photographs show Christo working from different angles, looking up from the bottom of the stairs, then down from the top, capturing Christo’s profile from behind as he manoeuvred his installation with two helpers.

In a similar way, Anzaï captured work by Buren, who, after being forbidden to paint directly on to the walls of the Tokyo Metropolitan Art Museum, took to the streets to graffiti the local area. Four photographs show Buren in action: running towards Anzaï with a pail of paint in one hand hanging low to the ground, painting two strips on a thick pillar, and in other public places. The importance of this group of photographs lies in Anzaï’s immediacy and proximity to the artists and to their spontaneous activity.

“Often the process of making these works was deliberately performative,” says Ball, explaining how Anzaï’s photographs gave these gestures tangibility. “They take on this weird other life as unrealised works, that amount to works in themselves by Anzaï.” As well as this off-the-cuff, snapshot-style of photography, Ball was keen to display the other distinct ways in which Anzaï approached his subjects, one being the sensitive way in which he took photographs of artworks in galleries.

Photographing a sculpture by Kishio Suga, at the Tamura Gallery in Tokyo in 1972, Anzaï adopts an intense angle, looking upwards to capture an extreme foreground of material, and the length of the work itself, reaching up into the background of the gallery.

“He really captures the tension in the work, including a lot of the ground and creating this flatness that is typically very sensitive of him,” says Ball, indicating works where Anzaï takes the role of an artist, framing objects with an analytical eye and communicating concept, rather than a documentary photographer looking to present an objective view. Yet, while Ball sees the artistic nature of his practice, he explains that Anzaï doesn’t see himself as an artist at all, but as a “documentalist”. This shows how Anzaï was blurring the boundaries between artist and documentary photographer, which often appear today as a binary.

“I think Anzai is a photographer who is making that a bit more porous,” says Ball, “particularly in this section over here,” he says, gesturing to one corner of the gallery, “where we are thematically concentrating on Mono-ha and this dialogue with natural materials coming into the gallery space. These photos feel more deliberately angled, set up, posed. He is really trying to communicate the exact intention of what the artist wanted, and that’s a real strength of his as a photographer.”

The works Ball gestured to show the creation and installation of a sculpture by Nobuo Sekine, at Shiki City Plaza, Saitama, in May 1972. The work involved cutting a piece of earth out of the ground, and placing it on a tall pedestal. Ball calls this series of four photographs a “cornerstone” of the exhibition because it is particularly emblematic of the Mono-ha movement. He explains: Nakahara used this phrase, ‘Art is a cut out of reality’, so this series of work that Anzaï captured encompassed this idea really nicely – it is literally cutting some materials out of the earth and representing it as it is, but in a slightly different way.”

For Ball and the White Rainbow gallery team who are creating a detailed catalogue of the 10th Biennale, Anzaï’s photographs have provided a way to unlock a unique exhibitions history. Looking through the vast archive of more than 2,000 photographs, printed in different sizes, some labelled, some not, Ball explained how the process of requesting information from Shigeo about certain photographs has created an anecdotal exhibitions history. “I like how unsystematised it is,” says Ball of the archive. If the team had questions, they could not just look it up, they had to go directly to Anzaï. “It’s all in his head or scattered in his office somewhere,” says Ball.

“The photographs provide a nicely subjective view on exhibitions, and that’s one thing we really want to showcase. His photographs are not what we know today as clean, pristine, neutral installation shots: there’s texture, chosen points of view, off-the-cuff moments. It’s thinking about an exhibition history through an artist.” Anzaï’s photographs were sometimes the only surviving documentation of certain exhibitions, even the 10th Tokyo Biennale: “We think the 10th Tokyo Biennale is actually very art historically significant, but there’s such poor documentation to the extent that Anzaï’s photographs are some of the best things,” says Ball.

As I flick through Mono-ha catalogues on the archive table in the exhibition, the sculptures in Anzaï’s photographs reappear in different contexts; from different angles, in different environments, different colours. Looking at these photographs in the catalogues, it becomes all the more clear that Anzaï’s works move far beyond documentation, because, shown together in this exhibition, they form a very personal journey through a history of art, to which Anzaï himself is central.

Anzaï continued to photograph artists and exhibitions, receiving a fellowship in 1978, which allowed him to reside in New York for a year, and, after that, travelling to Documenta and the Venice Biennale. The follow-up to this new exhibition, Index II, which is due to open in May 2016 at the White Rainbow Gallery, will address another important aspect of Anzaï’s work, portraiture, looking to explore the intimate relationships he had with artists, including Joseph Beuys, Gilbert & George and Yoshitomo Nara. 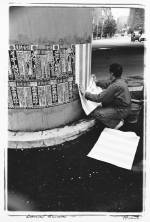 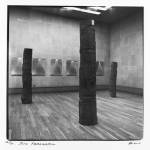 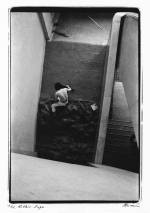 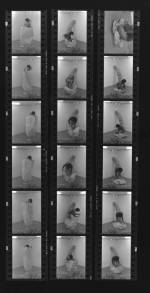 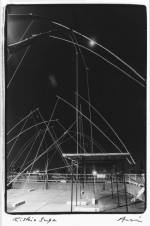