Channelling the principles of Japan’s Mono-ha Group, Lee Ufan’s latest collection of reductive paintings and sculptures attempts to reanimate the association between the human and the natural

The idea of nature’s innate spiritual richness and its capacity to usurp and enlighten the mind of man is something that has long pervaded the arts. In recent years, however, this archetype of Romanticism has been somewhat underrepresented. Resigned to the fact that industrialisation and capitalism are now synonymous with progression, artistic attempts to locate and exploit the oft-pursued ethereal power of nature in order to interrogate our own positions in the world have all but ceased. To enter into Korean artist Lee Ufan’s latest exhibition at London’s Lisson Gallery, then, is as refreshing as it is curious. Free of ostentation and insecurity, Lee’s work posits a reappropriation of these Romantic tendencies, examining the connections between materials and perceptions, between space both occupied and empty, and between the natural and the synthetic. Why? Because while our contemporary world is constructed on slab after slab of natural material, and while we believe ourselves to be in full control of its being, this material still exists as exterior to us, as natural and therefore other. And as the artist himself states: “It’s important to maintain a connection with the unknown”, lest those very slabs begin to crack.

Born in 1936 in South Korea, which was then under Japanese colonial rule, Lee came to prominence in the late 60s as a member of the Mono-ha (Object School) group, Japan’s first contemporary art movement to gain traction internationally. In direct opposition to the western notion of representation through expression, the Mono-ha artists presented arrangements of found and natural materials to emphasise the spatiotemporal relationships between the materials and the surrounding space. While the influence of the group has lessened over the past five years, Lee’s own practice has developed, the introduction of paint proving the most notable amendment. But as this latest exhibition illustrates, while the canvas has become more prominent in Lee’s facture, it remains undeniable that the tenets of Mono-ha are still very present.

Four near identical paintings occupy the first room of Lisson, each of a significant size, and each unadorned bar a single central shape. Carrying the outline of empty flowerpots, from left to right these shapes shift from light to dark, a spectral fade almost perfectly executed by downward brushes of thick oil paint mixed with crushed stone pigment. These works are all titled Dialogue, and this labelling is apt, for while they relate in situation, composition and colour (four are silver, one ceramic brick) they also carry a unity that is somewhat less tangible. From wall to wall, the canvases are calm and delicately balanced, and with this balance comes a feeling of composure and belonging. Nothing here is out of place just as nothing is invasive – that is, except the viewer. The comparative sensation is that of entering a chapel and feeling the eyes of saintly figures follow your trail as you move between pews. You become hyper-aware of your own being, and even the smallest cough or twitch of a finger resonates for far longer than it should. It is this atmosphere of stillness that Lee wants to create through his art. The work doesn’t say anything per se, but it knits a cloaking ambience within which you feel everything, including yourself. As Lee states, you “listen to the voice of silence” and as a result “you notice your own breath”.

But while Lee and Lisson Gallery propose this silence, and while it certainly draws close, it is never entirely attainable, for whenever you feel drawn to something that vaguely resembles serenity, you are pulled back by manifestations of the manmade. From the significant distance of concrete flooring that separates the works to the noises that float from reception and send continual reverberations around the gable roof, it is hard to experience any tranquillity in the room – near impossible to experience privacy. On paper, these reasons sound relatively insignificant, but these very physical, very real attributes of the gallery space break the surface of the atmosphere created by the works. They are small issues, they are pinpricks, but even after several pinpricks certain things begin to tear. With this ambience of intimacy and serenity, the works on show could be beautiful, they could be silencing, but without it they are left somewhat lacking.

Through a connecting corridor, past a suffocated and forgettable rock-on-glass sculpture in the courtyard titled Relatum – Rest (2013) – one of several similar works for which Lee has come to be known – the second room is equally, if not more anticlimactic. On one hand, this is again an issue of placement. The small space sits alongside a staircase and is cut in two by a glass door that looks (and listens) out on to a fairly busy road. Yet again, any spatial resonance that the works may have created is stifled before it has had time to breathe. But there is another problem here, and it is one of continuity. While the large canvases of the first room carry the bravado of finished works, confident in what they are and what they attempt, the three pieces in this secondary room appear somewhat confused. Again titled Dialogue, they purport to carry the same significance as their predecessors, but regardless of this and regardless of their contemporaneity, in fact they hold the appearance of early studies. While they carry the same vase-shaped branding, they are smaller, they tentatively explore the previously untouched realm of colour (one is blue, one brick, one luminous green) and two out of the three are rendered on watercolour paper that is held behind glass and frame. If they had preceded the opening scene as something of a prelude, then they would have made sense, but as it stands they are lost in the wake of what has come before, the audience’s attentions dwindling.

Like any good opera or Hollywood blockbuster, however, it is at its close that this exhibition truly rears its head. As you push past a heavy curtain and enter into the dimmed light of the third space, you are not only met by a dramatically lit boulder in the centre of the floor and a large framing canvas on the far wall, but you also find yourself in the depths of a palpable atmosphere, one of spirituality and poise. With the hanging curtain muting any exterior distraction, almost all attention is directed to the stillness and authority of the work itself, at its heart a stone that is effortlessly held, simultaneously weighted and weightless. But it is not just about the objects or the relegation of the fabricated, just as it is not about the space, or indeed your own presence in the space. It is about balance and the symbiotic relationship between the viewer, the objects and their surroundings. Here we locate what was attempted in the first room, a marriage of composition, material and existence inspiring the very awareness of being, relation and mutual significance that was strived for by Mono-ha in the 60s. We circle the room once more, still unclear as to whether we have understood everything about the work, and then exit the room. Back through the curtain, back to the lights, back to the low growl of the nearby underground line.

This exhibition is a mess of pros and cons, of successes and shortcomings. Certain works are simply not capable of eliciting any atmosphere; others potentially are, but are somewhat quashed by their surroundings, and it is only within the final space, one shut off from the busy milieu of the real world, that Lee is able to produce his desired effect. On one hand, it is a disappointing final report, but on the other, what better way is there to illustrate the constant opposition and imposition of the manmade on the natural than to demonstrate both sides of the coin? Yes, the early stages of the exhibition are hindered and are subsequently a disappointment, but it is having witnessed this very disappointment that we are able to appreciate the sheer mystique and power of the concluding room. It is a room in which we are able to rebuild our connection with the natural unknown and find our way back into the chapel, still and cold, but fully able to notice our own breath. 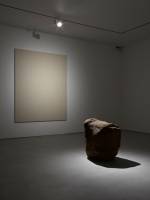