Hirose Satoshi: The Earth Is Blue Like a Lemon

Hirose Satoshi: The Earth Is Blue Like a Lemon 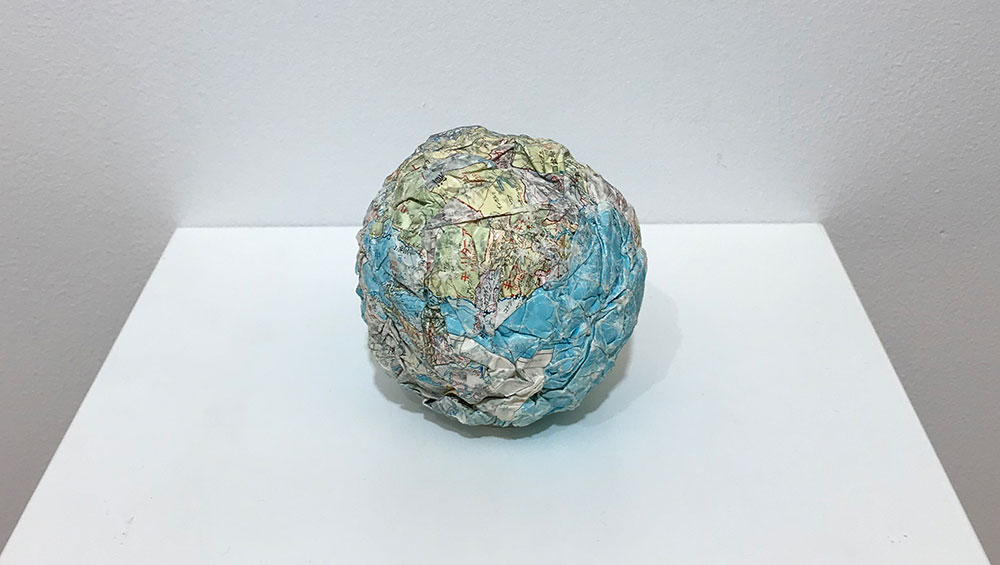 The exhibition at Arts Maebashi, Hirose Satoshi: The Earth Is Blue Like a Lemon, spans nearly a quarter of a century of Hirose’s career. Displayed across eight spaces, it brings together almost 90 pieces of work, including his early epic Lemon Project 03 (1997/2020), which sees the gallery floor covered with lemons. Through sculpture, painting, photography and installation, Hirose has been exploring the ambiguity of the meaning and identity associated with things that surround us. 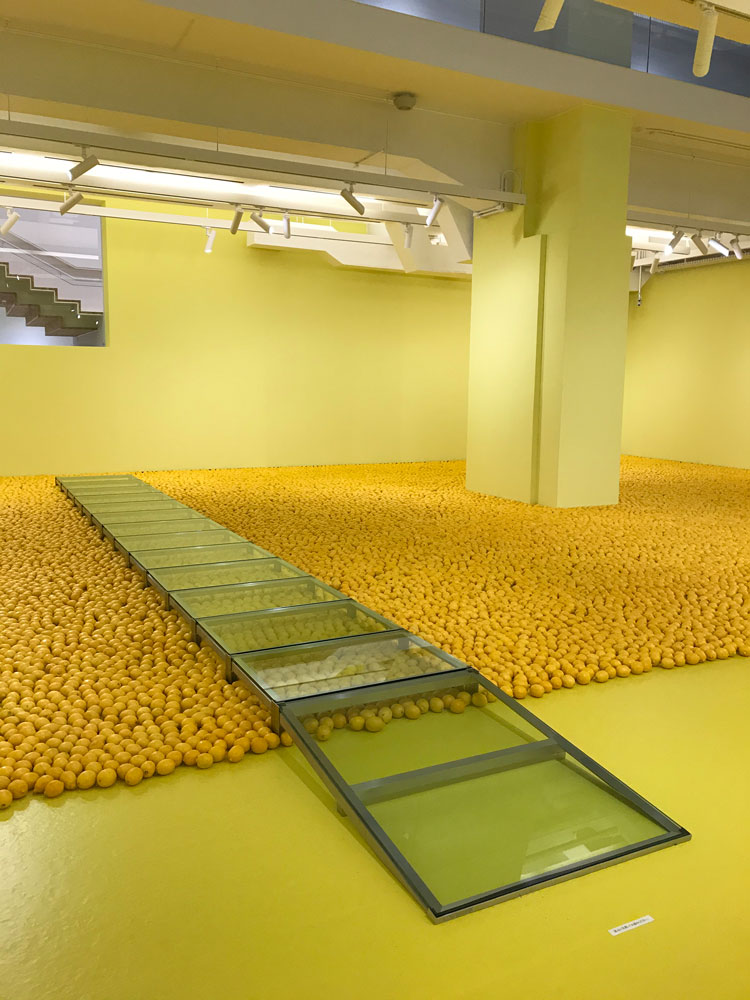 In 1991, he received a grant from the Italian government to study there and he has lived in Italy ever since. Through his mentor, Luciano Fabro, Hirose encountered the arte povera movement, which valued the objects and materials we use in everyday life. Hirose’s perception of common value, as well as what was the norm from a Japanese perspective, was overturned. “I realised that it is dangerous to draw a line between one thing as correct and the other as wrong. Things are fluid,” Hirose says. 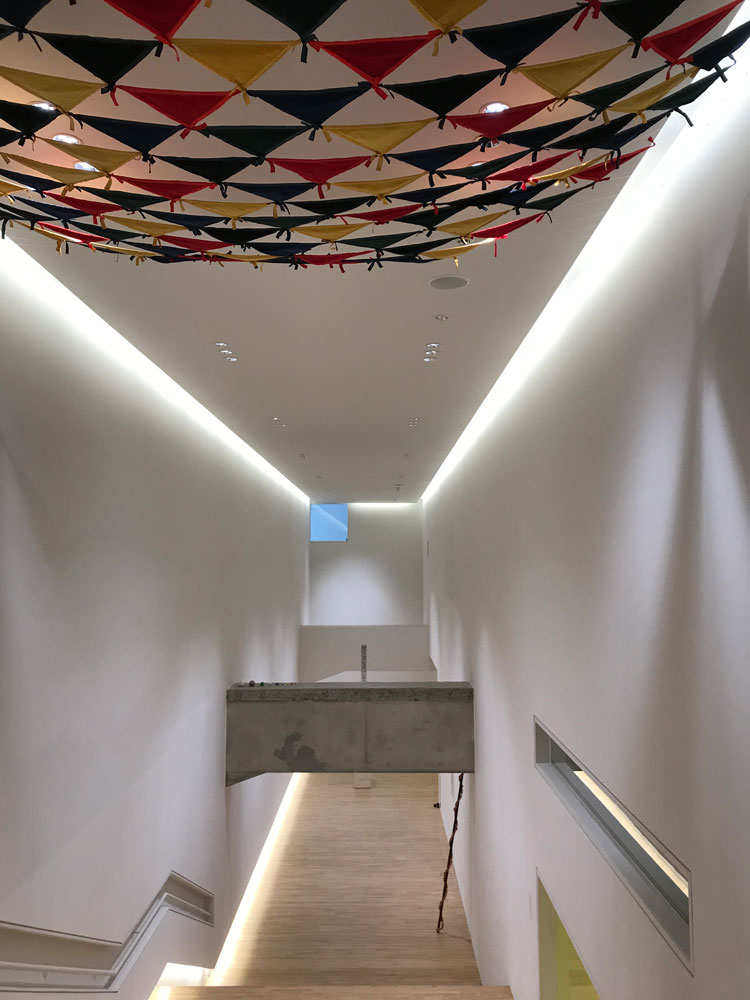 The exhibition starts with the 1998 work Arlecchino, a patchwork of fabric covering the atrium ceiling. Arlecchino, or Harlequin in English, is a shrewd but lovable character who appears in Italian commedia dell’arte and whose signature motif is a costume decorated with colourful triangles: it is from this that the artist has borrowed. “The majority of Italians will associate this patchwork of colourful triangles with Arlecchino,” says Hirose. It is an association shared by a generation of Italians, and this common recognition embedded in a certain culture or society is an important element in Hirose’s work. “Coming from Japan, living in Italy was very different in the 1990s. I observed differences in daily customs and gestures.” This notion of difference is what Hirose brings to his work. 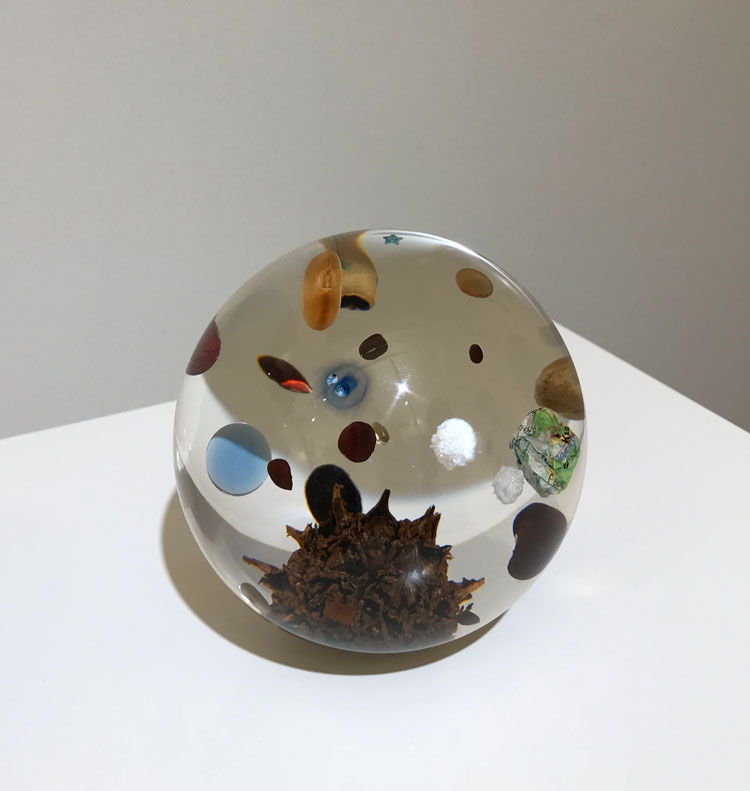 One work, Beans Cosmos (Tama), from 2016, is a spherical acrylic sculpture enclosing beans, glass beads, gold and a map screwed up into a ball. In mythology, says Hirose: “Beans are considered to be a neutral identity that mediate between the sacred deity and the secular human. I was intrigued to understand the image that people in certain societies have of this simple, almost overlooked ingredient.” The Italians even have a soup containing beans known as minestra dei morti (soup of the dead), which is traditionally eaten for the Day of the Dead (All Souls’ Day) in Milan and the surrounding areas. Hirose sees beans as an intermediary between the living and the dead. “There is this ambiguity in beans,” he says, explaining his interest in them.

Hirose challenges our normal perception of hierarchy. The beans, a small ingot of gold and the crumpled map are all floating within the sculpture as if their values are the same. “It is not about one being superior to the other, or one being inferior to the other. The same object or custom may be precious to one society, while it may not mean much to another society. This doesn’t mean one object or custom has more value than another. It is the context that attaches certain associations. This association is not definite but ambiguous. Beans, gold and the world map released in the spherical sculpture are a metaphor of this ambiguity of value,” he says. 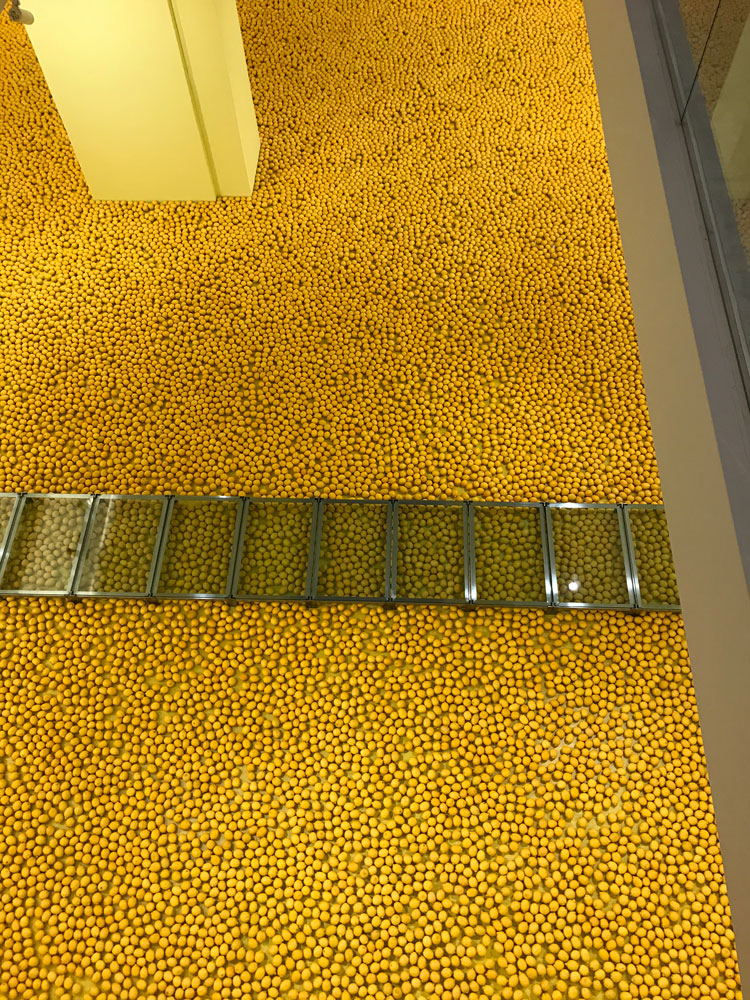 For Lemon Project 03 (1997/2020), Hirose brought in 30,000 lemons, which are displayed over the gallery floor. Visitors who step into the gallery will be greeted with the strong smell of citrus and will assume it comes from the lemons, not realising that most of it emanates from essential oil with which the artist has permeated the space. Here, visitors are challenged by the notion of natural smell of lemons and the aroma of the manufactured essential oil. Throughout the exhibition, Hirose’s work invites the visitor to consider various preconceived values held by different cultures and to rethink the relevance of their own preconceptions.

As a Japanese artist living in the west for nearly 30 years, Hirose has cultivated a distinctive identity. “The very notion of contemporary art is based on a set of rules from western society. As a contemporary artist from Asia, I wanted to deliver my perspective on contemporary art,” he says. 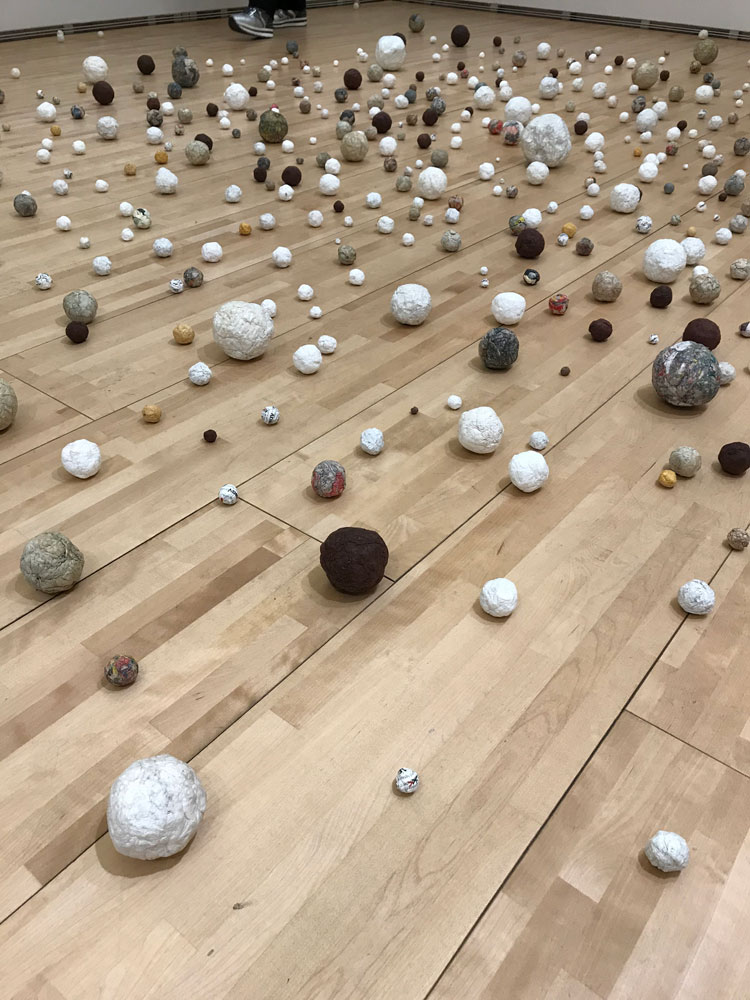 That approach can be seen in Untitled (Tama) (1992-2015). Tama, meaning sphere in Japanese, includes works in which different papers are crumpled into spheres. In Japan, tama traditionally has the connotation of being a spiritual soul that resides, not only in living animals, but in all the things in nature. Since 1992, Hirose has been crumpling up paper and crafting tama balls as a visual metaphor for this distinctive Japanese view of nature that believes everything in the world has a soul. Some of the tama balls scattered over the floor in the gallery are made from a crumpled world map, while others are made from wrapping paper or paper from unknown sources. It is up to the viewer to perceive what that tama, or soul, represents.

For Hirose, continuing to make the same work over the years is also important. It doesn’t mean that the work took years to create, but Untitled (Tama) was created over and over again from 1992 to 2015. “Not only is the physical substance of the artwork important, but time is also an important element in my work. Just as wine develops a rich flavour by maturing, I explore how the same work can mature over years,” says the artist. And the audience will perceive the same work differently depending on the era they live in. “I wish to be freed from definition. The world is difficult to define. It is about reciprocity. Things are related in one way or the other.” 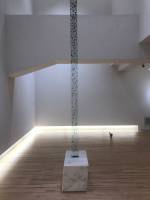