Staying and sleeping overnight in an artwork by Japanese artist Satoshi Hirose at Beppu in Japan is a journey following in the footsteps of the artist, as well as strolling through the memories of the city. The art installation started as part of a three-yearly community art festival, Beppu Mixed Bathing World, which first took place in 2009 and then again at the end of 2012. It was intended to make the city, which once enjoyed fame for its nightlife, regain its past vibrancy.

Located 1,200km west of Tokyo, the city of Beppu in Oita prefecture has, since the late-19th century, attracted tourists and intellectuals from across Japan with its abundant natural hot springs (with around 2,800 springs, it boasts the largest number in Japan). The city also flourished with the lifting of the ban on trade with foreign countries – which had virtually made Japan an isolated nation in the Edo period (1615-1868) – bringing in foreign products and culture. Despite its distance from the capital, Beppu had all the glamour and conveniences associate with an urban city, unlike its neighbouring countryside. Its geographical vicinity to China and other Asian countries also meant that it was the port of call for distinguished people and expatriates returning from Shanghai after the second world war. People from Shanghai brought with them the latest culture and lifestyle from the continent. Cinema, theatre, cabaret, bars and coffee houses opened in the city in the early-20th century, giving it a reputation as a place for sophisticated entertainment.

Beppu did not suffer the crippling destruction faced by many Japanese cities in the second world war, so it was left unscathed by the urgent need to rebuild the country from scratch that resulted in other cities in the implementation of urban planning with its functional distinction between districts for working, living and entertainment. As a result, Beppu retains the memory of the past, almost as if it were in a time capsule – life in Beppu is still in the mid-20th century.

Hirose, whose base is in Milan, was commissioned to create an artwork that would bring together tourists and local residents, and hopefully enable the former to discover the charm of Beppu. With the passionate involvement of a local landowner who wanted to use a 100-year-old traditional row house that he owned in the Hamawaki area of Beppu, the focus of the art project was to restore the house while preserving its original, century-old atmosphere and create a place where visitors could drift back to the glory days of Beppu.

As with all his artwork, Hirose began by exploring. He wandered around the Hamawakiarea for more than six hours, using all his senses to discover the rich memories embedded in the different timeline of Beppu. “City exists as an accumulation of history and memories. My intention was to make these memories of the past visible through artwork so that visitors start to reflect on the history of this neighbourhood,” says Hirose.

Being an outsider to the city, Hirose aimed at inviting visitors to follow a similar experience to his. Roving around the Hamawaki area, he noticed similarities to Milan. “The atmosphere of Hamawaki itself is different from Milan, but the fact that there are layers and layers of different periods projecting [their] faces from mews and corners of the streets reminds me of Milan,” Hirose says. “I wanted the visitors to experience a similar sensation,” he adds.

Hirose’s art is often about sharing a sensorial experience and involves the notion of time. In this instance, his art consisted of renovating two connected row houses into a space where visitors could immerse themselves in the locality. One of them, entitled “House of Kabosu”, was a house kept in the original, century-old structure but filled with Kabosu citrus, which is a household name in Beppu. Kabosu peel hung over the ceiling so that sense of the citrus filled the house, evoking a symbol of the area for visitors. As the days passed, the citrus dried out, marking the passage of time. During the Art Festival, various gatherings and community-involved events took place, allowing tourists and local people to share the same experiences.

Another row house was renovated to give an environment that was totally secluded from the outside neighbourhood where locals water their plants or lay out vegetables they have picked from their backyards. In fact, the Hamawakiarea has a history as a red-light district catering for sailors who frequented the port. The aura of that bygone period haunts the area, something Hirose intended to provoke in the second row house. Visitors enter the two-story house, entitled “Garden of the Firmament,” a space 573cm x 473cm x 723cm, which is laid out with countless blue glass beads glowing in the floor, lit from LEDs below. The original first-floor ceiling has been replaced with a thick glass sheet that also becomes the second floor. An enigmatic, mysterious aura prevails in the dark where the main source of light comes from the lit glass beads. “Entering the door from outside where today’s daily life goes on, I wanted to evoke the sudden change in the world where a feeling of ephemeralness of a man and woman’s love affair of the past still prevails,” the artist explains.

Even though the art festival is over, the two row houses remain open, allowing just two guests per night. Visitors use a Japanese-style futon that they pull out themselves to sleep over the blue glass beads. It is a surreal experience. But then you come to the reality of everyday life in Beppu, walking around the neighbourhood following in Hirose’s footsteps. In this way, art serves as a medium by which to experience the city, helping us to extend our five senses just a little bit more. 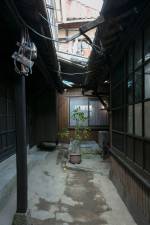 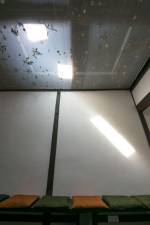 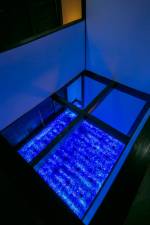 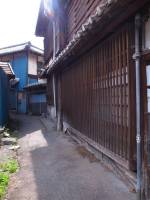