The Japanese photographer, famous for his portraits of celebrities and nudes, has selected about 120 works, taken over a 50-year period, leading the viewer on a trip down memory lane 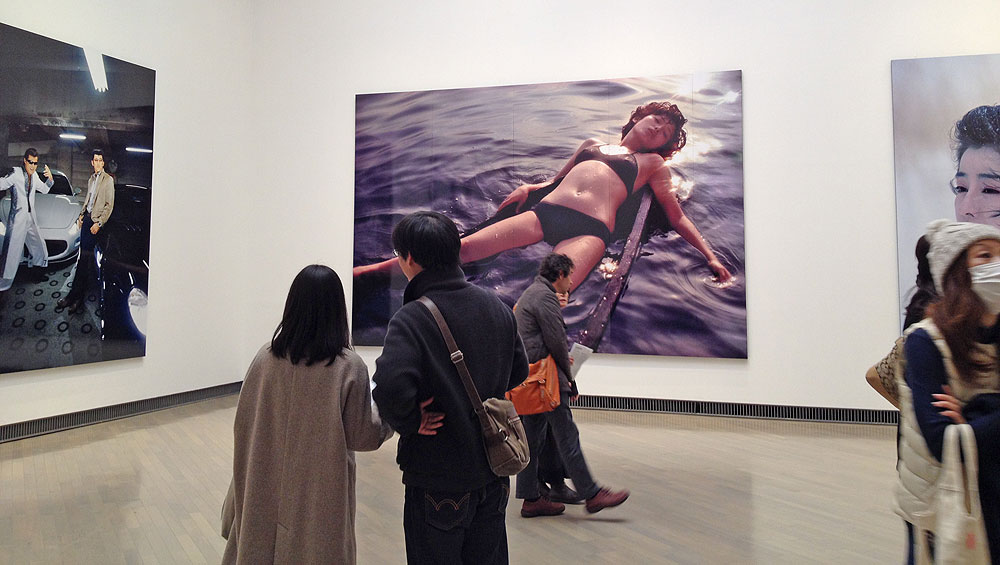 This exhibition, consisting of about 120 portraits of famous faces, is testimony to the power of photography. Kishin Shinoyama (b1940, Japan) began to build his name as a portrait photographer in the early 1970s, doing shoots of famous people for magazines. For the exhibition, Shinoyama has selected images from a career that has stretched over five decades, and split them into five sections: God – the deceased; Star – the celebrities; Spectacle – dream worlds that take us to another dimension; Body – the body undressed, beauty, eroticism and struggle; and Accidents – victims of the huge earthquake and the ensuing tsunami that rocked Japan on 11 March 2011.

The exhibition starts with a photograph of John Lennon and Yoko Ono kissing in Central Park, New York, shot in 1980 for the sleeve of the couple’s album Double Fantasy. Shinoyama asked John and Yoko, “Do you feel like kissing?” and this photograph was the result. The imagery is so intimate that it feels as if the couple are unaware that they are being photographed. Less than a month after this image became public with the release of the album, Lennon had been shot dead, so more than just an image on an album cover, the picture of the couple kissing became a reminder of this momentous event in 1980.

All the works in the exhibition have been printed on to large panels, some as big as four metres across, dominating the walls of the gallery. Their monumental scale brings the viewer back into the era in which the images were taken. Shinoyama’s photographs mirror society over the past 50 years: most of the portraits are of people who are easily recognisable to the Japanese public. They range from legendary author Yukio Mishima to fashion designer Issey Miyake, from kabuki actors to ballet dancer Vladimir Malakhov, and even include twin sisters Kin and Gin, who, because of their longevity – they reached the ages of 107 and 108 years respectively – became national celebrities towards the end of their lives. All these portraits were commissioned as commercial work, rather than being initiated by the artist, so, as Shinoyama explains, they were “always seen in magazine-size format, mass-reproduced, spreading across the nation, and not intended to be one-of-a kind artwork enlarged to be hung in museum”.

Shinoyama’s uniqueness lies in his innovative approach to photography. In the 70s, he created a new type of photography, coining the phrase “gekisha” meaning “risqué photography”, shooting young female pinups and causing a public sensation. His photography book Santa Fe, shot in in New Mexico and published in 1991, was a book of nude portraits of the then 18-year-old model-turned-actress Rie Miyazawa. The shots, which were reminiscent of the Greek goddess Diana, raised the nude photograph to something akin to a sacred image, and resulted in book sales of more than 1.5m.

Despite being such a well-known photographer, Shinoyama remains humble, affording his subjects much respect when taking a portrait. “I prepare the composition,” he says. “However, unlike an artist, a photographer can never have total control over the work. One needs to have respect for the subject and when I am good to them, the goddess of photography calls my name and is there at the moment the miraculous shot is realised.”

This approach to photography has meant that Shinoyama has avoided having his work categorised as art photography or photojournalism. “Photography is beyond art,” he says. “It can include art, but it doesn’t come under art.” He has always believed in shooting contemporary images, never wanting to look back nostalgically, and did not think of showing his past works in a retrospective exhibition. However, admitting that “iconic images have the power to bring back the time they were taken”, Shinoyama wanted to show the power of the photograph, and even more, the power of the subject. The overwhelming size of the photographs on show here are even more compelling seen at a time when so many portrait snapshots are now viewed on smartphone screens.

That doesn’t mean Shinoyama is neglecting the power of digital technology. He is very much a contemporary man, happy to embrace new technology in his work, using a digital camera instead of obstinately sticking to a twin-lens reflex camera. He believes that, in order to grasp the time, it is best to use the technology of that time. In the 1980s, he coined the term “shino-rama” – a play on Shinoyama – to describe a technique whereby he connected three cameras together to shoot panoramic scenes of skyscrapers (although these architectural images are not included in this exhibition). It was during the economic bubble in Tokyo, and he has said that he couldn’t capture the energy of that era with just one camera.

Shinoyama is dismissive about being called journalistic in his photography. “There can never be true objectivity in my photographs: there is always a certain bias of mine,” he says. However, there is one group of portraits that, as far as possible, he shot without introducing his own perspective – the portraits of the victims of earthquake that shook Japan on 11 March 2011. He was not commissioned to shoot these scenes, but stepped in in the aftermath of the earthquake because of a desire to grasp what had happened. Faced with the survivors of an unprecedented calamity, Shinoyama took his camera and asked them if they would mind standing and looking into the lens. He didn’t ask anything else. There are shots of a nine-year-old boy and his seven-year-old sister, of a husband and wife: these people were by no means celebrities, but rather people forced to live extraordinary lives after 2011. These huge prints of quiet and monochrome portraits leave the viewer to imagine the colour and the other family members of the subjects, as well as the significance embedded in the images. The size matters. 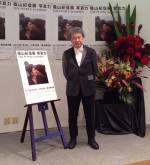