There is a darkly amusing contradiction in the pairing of subject and setting in Suspended Animation at Les Abattoirs, Toulouse. Where better to stage an exhibition about the meaning of life and the physical body in a digital world than in a 19th-century slaughterhouse, formerly devoted to the cessation of existence? The term “suspended animation” refers to the slowing down and stopping of life in order to conserve it, but while the abattoir suspended it totally, the artists in this exhibition examine how virtual worlds are coming to determine, and in many cases replace, life as we knew it – to reanimate and re-embody former flesh and bone.

The show claims to offer a humanist perspective on digital experience and analyse how this affects modern living. While it is already something of a cliche to bemoan the tyranny of the virtual or to fear its rise in the political and social spheres, Suspended Animation does something new. We see the hope that formerly accompanied technological advancement – exemplified at the show’s start in Edwin Catmull’s A Computer Animated Hand (1972), an early experiment in the computerised mapping of human movement – being challenged through the various artists’ subtle critiques of its operations and wider implications. Here, the medium is the message: each artist uses the forms of technology to reflect back on its power and efficacy as a visual and aural replacement for what was previously understood as the “real”. 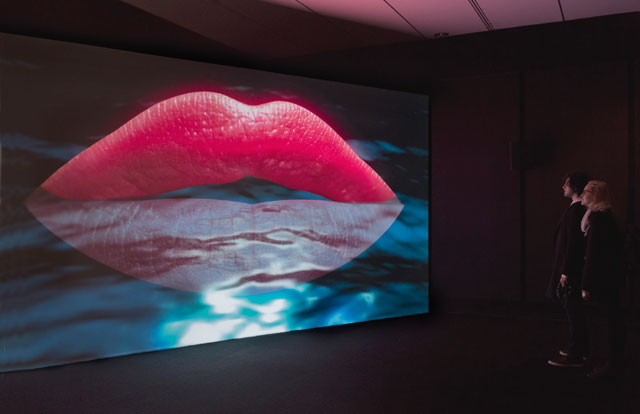 The disembodied self is a major thread across the show’s spaces, exemplified by Agnieszka Polska’s I Am the Mouth (2014), a digital animation of a pair of lips that deliver soothing philosophical statements: “My words produce waves of pressure and displacement”; “My words are transmitted by the substance of the sea”; “I am dipped in a sea of a social substance”. The slow, sensual movements of the lips are slightly misaligned with the sounds they speak, and as they move, wave shapes emanate from them. Seemingly poetic, the words in fact reduce existence to expression – the self conceived as the sum of its utterances – and in turn reduce that expression to a series of waves, floating in the ether, hoping to interact with other waves. Polska transforms the screaming, neurotic maw of Samuel Beckett’s “Not I” into “I Am”, suggesting a 21st-century disregarding of the body, where language, ideas, energy and presence can thrive without it, and possibly better than within it. 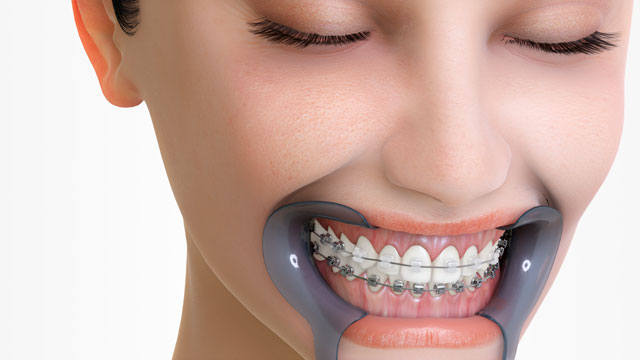 Kate Cooper’s Rigged (2014) posits the opposite: that as an “empty”, the digital avatar will nonetheless seek human traits. “As an empty I am free,” the avatar in Cooper’s film states, yet in the safe space of her virtual world, she seeks emotional as well as physical existence: “I want to do something as loaded as a heart.” Pointing to human consciousness as a “nexus of signifiers and coded ideas,” Cooper suggests that human programming of the robotic only goes so far. Authentic humanity lies in the darker, more enigmatic recesses of daily thought and existence, and even the most advanced digital humans will seek these, however destructive they might be. 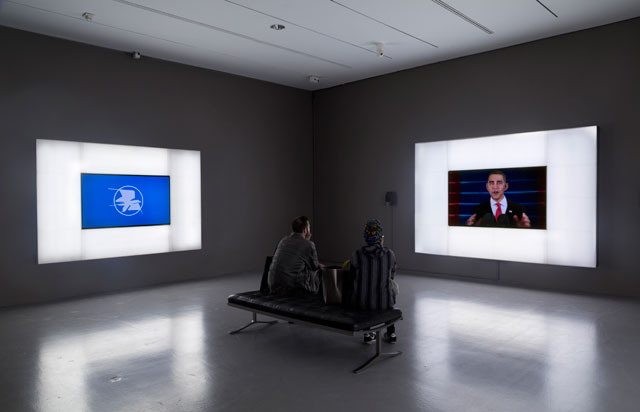 Truth and authenticity are conceptualised differently in Josh Kline’s Hope and Change (2015). A digital animation of former US president Barack Obama is seen giving speeches, the phrases taken from actual press conferences and pasted together to emphasise their poignancy but also drain them of meaning. The suggestion that one should “make friends of one’s enemies”, for instance, sits alongside the warning: “Remember who the enemy is … those who profit from misery.” Kline’s film was made in 2015, and watching it in Trump-era 2017 gives it new resonance as a statement about trust in politics and authenticity in political language: the careful and considered, though in many ways hypocritical, words of Obama contrast with Donald Trump’s chaotic, self-aggrandising and commonly inaccurate tweets. The question remains whether this is preferable to Obama-style political statements, meticulously crafted to both convey and to obscure, then manipulated by the media into an oversimplified network of veracities and intentions.

The exhibition’s most compelling work is Jon Rafman’s A Man Digging (2015). A type of wooden filing cabinet sits in the centre of the room, and viewers climb inside it to watch a TV screen on which a video game is being played” out, as if by the viewer themselves. Immediately implicated, our remaining “lives’ are counted through a graphic in the screen’s corner, while a voice tells us: “I didn’t believe in my life so I traded it in for stories.” Scenes of devastation are shown – abandoned cars, dead bodies, an empty nightclub post-brawl with music still playing – resembling the chaos wrought in video games such as Grand Theft Auto. In such games, however, players rarely see the consequences of their actions: these eerily quiet, digitally realistic scenarios that are left in the player’s wake. Rafman’s installation exposes and critiques the solipsism of digital experience and activity – of the trading of life for “stories” – and in doing so warns of its selective reality and attendant lack of moral or social accountability.

While Rafman highlights the dissolution of digital utopia into dystopia, Ed Atkins and Helen Marten offer a more absurdist view. Marten’s animation Orchids, or a Hemispherical Bottom (2013) imagines not the disembodied virtual human, but objects as digital selves, speaking, moving and emotionally animated by their new potential as “real” beings. While drawings and musical notes hop across the screen, a male voice talks with urgency about the concept of heroism and about moving house, while rolling pins unfurl and reroll drawings across a surface, and an increasingly frantic but aggressively polite voice asks repeatedly for someone or something to “Fetch the blueberries in from the kitchen”.

A similar lack of coherence, with a much more sinister tone, emerges in Atkins’s, Warm, Warm, Warm Spring Mouths (2013). A digital avatar is shown seated in various settings, including a desert and a laboratory, his very long hair combed over his bent forehead. The avatar’s poetic, disjointed, nostalgic reminiscences about radio weather forecasts, his friends who were once alive and memories of meat-selling are repeated over and over, clinging verbally to a past normality and social existence. Later, the avatar becomes an object of study: “Does it have a heart? What desires power it?”, as if a futuristic form of digital excavation has thrown up a being that can no longer be conceptualised or understood in physical or emotional terms.

In the crushingly real solidity of Les Abattoirs, then, we see an impalpable yet powerful truth asserted. However we feel about a digital present, exploring its forms in the way that artists do helps us to imagine our future and, crucially, to know what of the past to grasp on to and defend, be it interaction, morality, intimacy or simply flesh. Suspended Animation reassesses the real and the authentic, positing that digital culture is as much about controlling the meaning and redefinition of those concepts as it is about using the intangible and the super real to understand what is currently, tangibly, “us”. 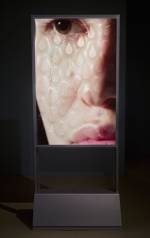