The artist draws us into his virtual world with playful installations and video works, as he leads us through his disturbing and gripping interpretations of internet culture

Canadian artist Jon Rafman's (b1981) first major solo show in the UK, at the Zabludowicz Collection, is so extensive that it could fill a gallery such as the Hayward. Transforming each area of space in the former chapel, Rafman has created a series of sets that absorb the audience into the virtual world he explores. Taking a critical yet thoroughly entertaining approach, he profiles internet culture from the peaks of fantasy to the pits of dirty “troll caves”, showing the extreme capacities of freedom and folly in society's vice – the online world.

Rafman’s interrogation of the virtual in his body of work has earned him the label of a post-internet artist yet, inside the gallery, Rafman is equally in touch with the offscreen experience, focusing on tactile materials and creating contrasting poses for viewers to watch his work, enabling them to also experience a very physical sensation.

The surreal journey starts in a ball pit hot tub, where, despite the clearly pornographic and strange images that flick by on the screen above in his work Still Life (Betamale) (2013), a child is bobbing around in the tub. To watch the next work, the visitor is engulfed within a “squeeze chair”, built to comfort people with autism, and will soon be climbing into a metal filing cabinet fitted out with a cosy sofa. In the upstairs gallery, you can watch the works while lying face-down in a massage chair or on a waterbed.

Rafman’s work moves beyond the cliches of “immersive” or “interactive”, however, because, along with the sets he creates, it is the intriguing, and often disturbing, subject matter of internet culture that grips the attention of the audience.

The Zabludowicz-commissioned film Sticky Drama (2015), which is shown in the gallery inside a psychedelic bedroom, is Rafman’s first feature-style film, produced in collaboration with Warp Records and experimental musician Daniel Lopatin, also known as Oneohtrix Point Never. Rafman, who studied philosophy and literature at McGill University in Montreal, and then went to the School of the Art Institute of Chicago, has always been interested in narrative, and the film is a progression in combining reality with the onscreen amateur subcultures that he has explored in previous works.

Developed on London’s brutalist rooftops and in its leafy back gardens this summer, the short film is packed with drama. Rafman worked with more than 35 local children who go to war against each other in a surreal fantasy zone that resembles a makeshift combination of Avatar and Game of Thrones, edited into a patchwork of memories and perspectives.

It is Rafman's take on LARP – live action role-playing, in which people play in large spaces, physically acting out the characters from video games. The dramatic effects are translated from the screen with real-life materials, including piped flames, bright blue acid reflux, and even supermarket dried herbs that are shaken on to a wound. Somehow, with a helping hand from some creative editing, and an incredible soundtrack by Oneohtrix Point Never, the result is a complete success.

The film shows structures of narrative – intent, collision and climax; a vague notion of good and bad; and a MacGuffin, an ugly piece of solid goo that has assumed supernatural powers of memory. Despite these structures, though, the film is on a strange loop and the viewer always finds themselves back where they began, yet never knowing quite where the story started.

The green goo, which has a sunken Tamagotchi screen face, flies low through a maze, which the visitor can later enter, hovering over psychic puddles, looking back in time to the scene of a young boy sitting talking to a paper butterfly on a string. “Butterfly, what is your wisdom?” asks the boy. He listens closely, pauses, and then says: “And so I went to war.” He starts his mission, killing the first creature that he meets along his path in a blood-spattered explosion.

The green goo seems to be the reason that they are all fighting: one team protects it using its special powers, while the leader of the other team searches for it, climbing the stairs into the psychedelic bedroom where he finds it and captures its energy.

The butterfly and the quest for an Anima, a small character with special powers, feature in the now-discontinued online role-playing fantasy game Prius, which is the topic of an HBO documentary on internet addiction titled Love Child that features Oneohtrix Point Never on the soundtrack. Prius became controversial and associated with internet addiction after a couple in South Korea were charged with involuntary manslaughter following the death of their three-month old child from starvation. It was found that they had been playing the game for six to 12 hours a day, leaving their baby on its own. The boy protagonist in Sticky Drama shows signs of internet addiction disorder, isolates himself in his bedroom, sits rocking in the corner or slumped in bed, his laptop glued to his chest at a right angle.

Rafman has explored the social virtual world before, notably in his work Kool-Aid Man in Second Life (2009) in which he created an avatar that toured people around the Second Life realm, yet Sticky Drama takes an openly more critical approach to the subject matter in a development of these ideas, whereas earlier works in the show are more exploratory and documentary.

The most enticing set of the exhibition is the artificial grass maze. The visitor is plunged into darkness and must feel with their fingertips along the prickly plastic walls. Lit up along the way are strange marble statues that look serene, like apparitions or the deceiving fake trophies of video games. After a few false turns, the heart of the maze reveals a gallery attendant holding an Oculus Rift virtual reality mask, which will transport the viewer from the heart of the maze into a haunted forest. It is over all-too quickly and visitors find themselves back in the real world, weaving out through the maze, eyes now fully adjusted to the darkness.

Through Rafman’s attempts to translate a virtual experience into a physical one, it becomes all the more clear that reality can never quite match the pure fantasy experience that can be reached online; when it tries it ends up looking sticky and slightly grotesque, somewhat like a night club when the lights turn on. Without the freedom of animation and imagination, exposed under the cool blue light of “real life” in the gallery context, the subcultures he displays adopt an awkward amateur aesthetic, but one that is fascinating in itself. Rafman is the mastermind of this incredible virtual playground, which seems too clever and precise to be created by an outsider looking in. The success of this show lies in the perceptive references, the authentic narratives and the complete poetry of the virtual landscapes, which could have been achieved only through a personal obsession and hours of play. What makes it so intriguing is that as well as being an artist, Rafman is a player. 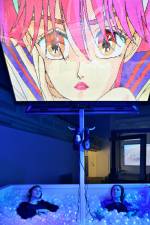