What Absence Is Made Of

What Absence Is Made Of 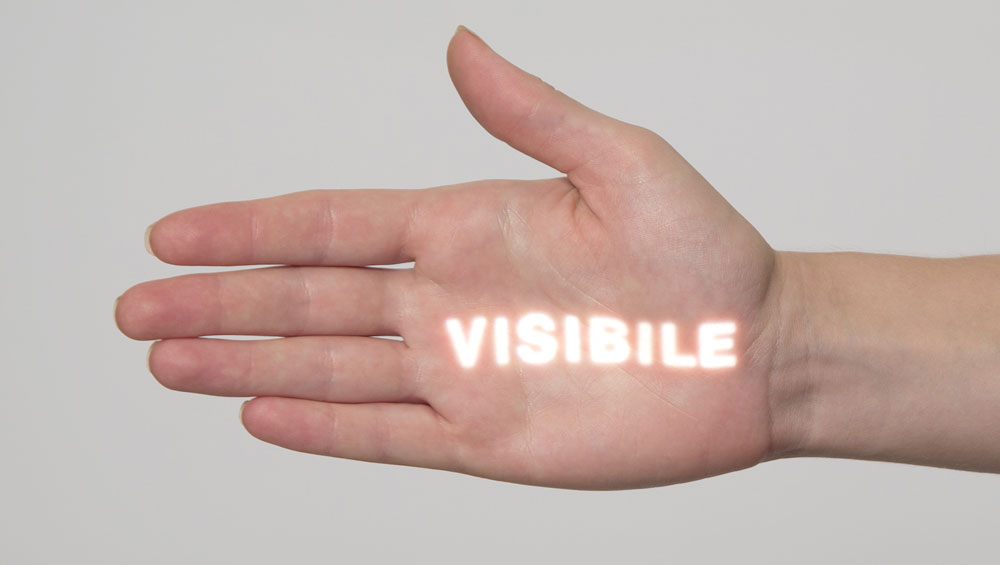 The Hirshhorn Museum has brought together an extensive selection of artworks, spanning several decades, in exploration of the question: What is absence made of? The show, which was organised by Gianni Jetzer, the museum’s curator-at-large, focuses on the way artists express absence through sculpture, video installation, painting, photography and other mediums. The collection includes recent acquisitions made by the museum as well as rarely shown works, together forming a diverse list of modern artists, including Ed Atkins, Huang Yong Ping, Constantin Brâncuși, On Kawara, Ana Mendieta, Hiroshi Sugimoto and John Baldessari. 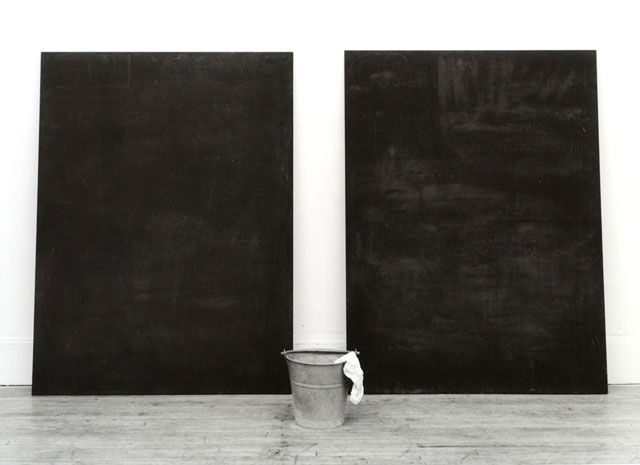 In 1970, at a local crematorium, Baldessari incinerated all the paintings he made between 1953 and 1966. He then used the ashes to bake cookies, which he preserved in a glass jar and titled Cremation Project. The piece, which is displayed in What Absence Is Made Of, asks its viewers to think beyond the boundaries of the physical object in front of them, prioritising concept over object. Baldessari is grouped among early conceptual artists working in the late 60s, whose work focused, as art critic Lucy Lippard famously phrased it, on the “dematerialisation of the art object”. 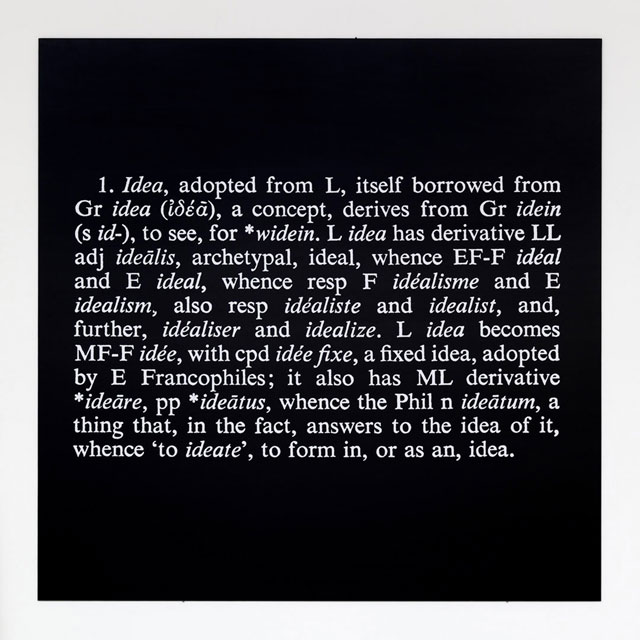 The Hirshhorn also includes other artists who worked in this vein: on display, too, is Joseph Kosuth’s Titled (Art as Idea as Idea) [idea] (1966), a written definition of the term idea along with its etymology; Giovanni Anselmo’s Invisible (1971), a projection of the word visible that is revealed only when set against a surface; and Hans Haacke’s Condensation Cube (1963-65), a transparent acrylic cube that produces droplets of vapour. 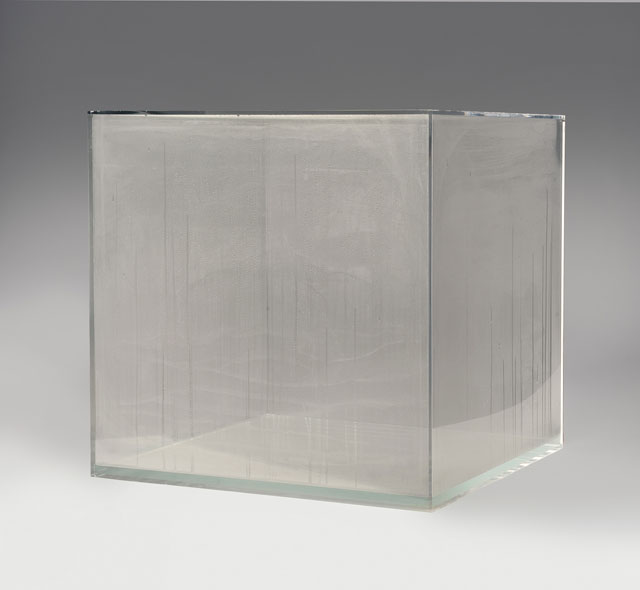 What Absence Is Made Of uses these 60s “dematerialised” artworks as a starting point for the show. Since then, contemporary artists have continued to meditate on absence, loss, emptiness, invisibility and fragmentation. “In an era of increasing consumerism,” Jetzer says, “it [absence] has become an increasingly compelling way for contemporary artists to surpass the limits of the material world, the latest in the long tradition of expressing transcendental ideas through art.” 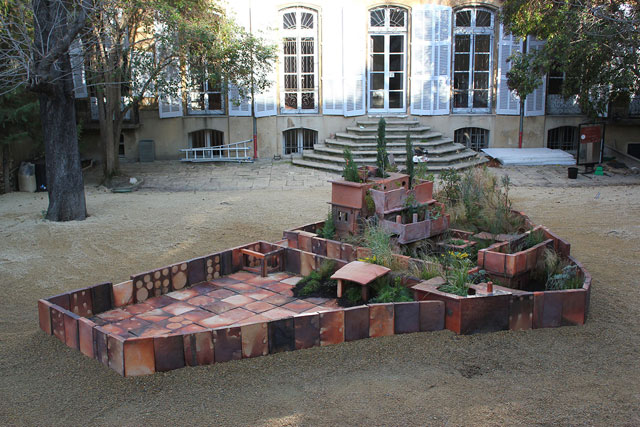 The cultural, social and political influences behind the pieces at the Hirshhorn are fascinatingly varied; in Abbottabad (2013), Ping has recreated the compound – a large floor sculpture made from ceramics, soil and plants – where Osama bin Laden hid for years before he was discovered and killed. In The Asthmatic Escaped II (1992), Damien Hirst constructs two large, glass boxes that contain a tripod, film, a saucer, biscuits, a plastic cup and lid, jeans, a T-shirt, trainers and an inhaler. Together, the objects suggest the absence of a patient, that is Francis Bacon, who passed away shortly before Hirst created this monument to him.

One of the more recent acquirements of the Hirshhorn to be included inthe exhibition is a dystopian three-channel installation by British artist Ed Atkins. For the video, Atkins mixed appropriated imagery with computer-generated imagery to create an airport security checkpoint at which an avatar repeatedly pulls off layers of his face and body parts, his skin sickly yellow and bruised, exhausted from the screening process, only to reveal another layer to be removed and screened. The dismembered parts, along with other items such as a MacBook, a pineapple and a chicken, are placed into a tray and carried away on a conveyor belt. 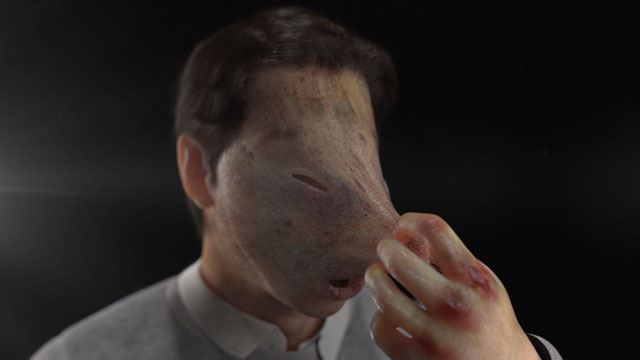 The action is set to the repetitive, maddening, slow buildup of Ravel’s Boléro, which the avatar quietly hums along to while peeling off and depositing his layers. A wide shot of the luggage claim belt reveals a sign that reads: “Always remember that you are absolutely unique. Just like everybody else” – ironically drawing attention to the way that technology and artificial intelligence make the human body insignificant.

Siebren Versteeg also explores the dehumanising effects of technology in his piece Neither There Nor There (2005). For this video, Versteeg set up two small screens side-by-side, showing the artist sitting in an empty room on the far side of each screen. His self-portrait slowly and silently moves from one screen to the other, pixel by pixel. The image of his body is never still, but endlessly shifts between screens, capturing the feeling, as per its title, of being neither there nor there, lost somewhere in the translation from physical body to the digital realm.

Exploring a different kind of absence – without any obvious cultural, political, social or digital impetus – is Ann Hamilton’s immersive multimedia installation, At hand. The piece was first shown at Massachusetts Museum of Contemporary Art in 2001, when it was titled Corpus, in a room the size of a football field. At the Hirshhorn, At hand invites its audience to enter a white, brightly lit room – far smaller than a football field, although still large – that is littered with loose sheets of translucent white paper. The paper gathers on the floor, forming a shallow sea of sheets on which viewers can walk, sit and lie down. The room is silent except for the sound of the mechanised motion of two apparatuses attached to the ceiling, from which paper is released and softly falls to the ground. The paper is blank, but with a faint trace of red ink around the edges. With its stark blankness, and the lack of instruction or text, this immersive piece leaves much room for the audience’s participation: an absence that invites numerous possibilities. 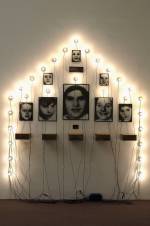 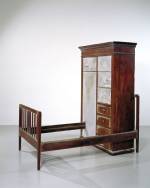