1970 was something of an annus mirabilis for John Baldessari, the so-called Godfather of Conceptualism. His doctrine is backed by an extensive teaching career, from pre-school to postgraduates. It was in 1970, on joining the faculty at CalArts, the institute founded by Walt Disney to promote interaction between performing and visual arts, that he coined the term ‘Post Studio Art’: conceptual art being, in a nutshell, ‘work that is done in one’s head’.1 In that same year he executed his cremation project, where he burnt all the paintings he had made between 1955–63, and collected the ashes in a book-shaped casket. This marks a starting point for an ongoing game of exquisite corpse in Baldessari’s work, in its interchange between ideas, words and images. The book has been a salient form. He has acknowledged, ‘I guess it’s fundamental to my work that I tend to think of words as substitutes for images’.2

With the object serving the idea, the artist’s book, Ingres and Other Parables, published by Studio International in 1972 offers a key to Baldessari’s deadpan approach.3 The title story, in just a few hundred words, summarises a painting’s physical decay as it passes from one owner to another. Despite its eventual deterioration to a single nail, the painting accrues sales-worthy documentation, ‘a clear lineage, a good genealogy’. As with the other parables in this collection, the story is tailed by a moral, which in this case serves as a key to Baldessari’s teaching.

‘Moral: if you have the idea in your head, the work is as good as done.’

Yet its modest proportions are rather usurped by the scale of the comprehensive catalogue John Baldessari: Pure Beauty, published on the occasion of the major retrospective, travelling from Tate Modern in London to Barcelona, Los Angeles and New York. Ingres... sat quiet in a vitrine in the Tate’s installation: it is a squarish pamphlet with the stories reproduced in four small blocks across each page (English, French, German and Italian translations), and headed by monochrome photographs. Pure Beauty is measured out by 11 essays; verbose exegesis does not serve Baldessari’s crisp sensibility. Images too take a secondary role. In broadly chronological sections, they are wedged between texts, like textbook illustrations. Several pages from Ingres... are reproduced on a single page, so small the text is barely legible.

In Choosing Carrots (A Game for Two Players), made at the same time as Ingres..., Baldessari encourages a child-like delight in flouting that pre-school rule, ‘it’s rude to point’. Across a sequence of 14 photographs, three carrots are laid out on a black background, and from a bird’s eye view we see a finger point to one of the carrots. Baldessari’s visual pun on the likeness between carrots and fingers is played out in an equivalent to rhyming verse. In Pure Beauty however, the joke is minimised by the squashed dimensions of its reproduction. Choosing Carrots should, first and foremost, make you smile; the art teacher lets a morality sneak up behind the joke (making art is about making choices). 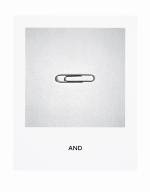 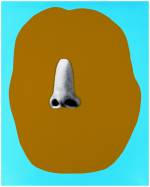 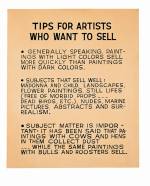 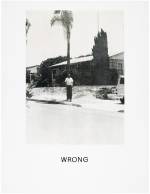