Leon Levinstein (1910–1988) is renowned for the casual, black and white shots of his adopted city, New York. Originally from West Virginia, Levinstein moved to the city in his thirties, where he found comfort in photographing strangers, and in so doing, captured the character of the city in its heyday – a New York before it became gentrified and cleaned up and commercial. His casual portraits are bare, straight, poised – and embody the haphazard, young chaos of the city from the 1950s to the 1980s. His portraits are matter-of-fact and unsentimental – unapologetic, even. His subjects stand their ground.

Perhaps most moving, however, is the subtle loneliness of these photographs – the feeling of being ever so slightly outside of the crowd, on the tip of the curb and the edge of the frame. Levinstein's subjects are not hostile, exactly, but a slightly suspicious tone underscores a pervading vulnerability – we experience a solid handshake with unsure eyes. We are never quite sure who we’re meeting or what we are seeing, and perhaps they are not either. These people remain strangers despite the brief encounters we are offered with every shot.

And so it would seem that Levinstein succeeds in his aim to: “... Look at life – at the commonplace things as if I just turned a corner and ran into them for the first time. "We meet beautifully composed beach bums, young mothers, hustlers and hipsters – a myriad of lives and looks. We see tired socialites and cradled babies, attractive girlfriends and lecherous men. We see (with more focus than usual) all those accidentally connected lives – casual glances at the bodies and beauties of the street.

During his lifetime, Levinstein was celebrated by a host of influential figures, including Alexey Brodovitch, artistic director of Harper's Bazaar, as well as Edward Steichen, the well-known curator at the Museum of Modern Art (where Levinstein was included in several group exhibitions) and a photographer in his own right. He was associated, at the time, with Diane Arbus, Richard Avendon and Robert Frank – and was very much an important figure in that group, despite relatively limited commercial success and outside exposure. He photographed the regular people on the street, but few outside of the art world would have recognised him, and he remained until his death rather more of a photographers’ photographer.

That the Met now invites rather a lot of attention to Levinstein's worthy collection of work is a cause for celebration. Levinstein's work marks a time before photography became such a commercial endeavor, and captures a city before it swayed that way also. We are shown a candor that is rare in modern photography, and we leave the exhibition with these images and brief encounters lingering – almost surprised that such a chance encounter with a bunch of strangers can indeed be so comforting. 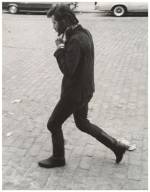 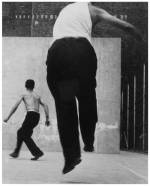 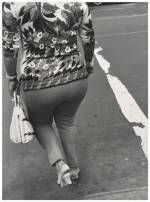 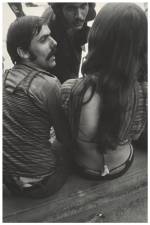