In this exhibition of monochrome images Canadian Photographer Nance Ackerman turns the cliché image of Aboriginal peoples on its head. These photographs celebrate the extraordinary and everyday feats of Canadian first Nation women, from Labrador to Vancouver and the Arctic to Oka, framing faces whose lives have changed their communities by making significant and positive differences to health, education and government policy.

First Nation history is also Ackerman’s history; Ackerman’s father and grandmother were both Mohawk Indians and “Twenty years ago she set out to search for identity” (Museum text). In the long journey into her Mohawk culture, Ackerman followed where her father had chosen not to go. Her text displayed alongside the photographs tells us “Maybe he was never meant to explore his native heritage, but apparently I was, … I would like to think I have gained some wisdom through the journey forging a new connection with my ancestry, mostly I am left in awe of the resilience and strength. It was the thread that held these very different women together. This exhibition is a tribute to that strength.” Reading through the narratives that accompany Ackerman’s photographs is to sail through a marvellous weaving of her-stories, giving a rich layering to Ackerman’s powerful and thought provoking images.

Ackerman’s photograph of Mina Tuckatuck Weelaltuk (1919–2005), taken in Nanuvik Quebec, 1992 shows an old smiling woman. From a deeply lined face her clear eyes peer at us over huge glasses. Mina was the oldest activist on board the “Odeyak” a 24ft boat (half kayak half canoe), paddled by 60 Cree and Inuit people. The Odeyak’s 1,200 mile five weeklong journey in 1999, from Great Whale River to New York City, was made to draw attention to the Great Whale electric project, and Quebec’s energy deal with New York on Inuit and Cree treaty lands. (Richard Tardif ‘Epic Journey of the Odeyak Celebrates 20 Years’ in Nation News May 2010.)

Another image, taken in Kanehsatake Quebec in 1994, shows Wathahine (Mary) Nicholas, Mohawk language educator. (Wathahine is Mohawk for On a Long Journey). The accompanying text reads: “Following the Oka crisis of 1990, an armed stand off involving Mohawk warriors, The Quebec police and Canadian army, Wathahine decided to start a Mohawk language school … to help bring the youth of her community back to their language and culture.” In our contemporary and culturally mixed world we have all experienced urban environments, where restless, disenfranchised and culturally dislocated youth would benefit immensely from the work of such a woman.

As Kanahstatsi (Nancy) (Kanehsatake, Quebec 1995) Mohawk educator tells us, “If women were running this here, it would be different. Clan mothers know better than anyone whose children make the best leaders followers and workers”.

It is testament to Ackerman’s integrity and clear vision that she has gathered this remarkable collection of women together. Her photographs, without romanticising their position or fate, frame each of her subject’s achievements in a celebratory archive of image and text. Ackerman shows us these extraordinary women who have over come adversities domestic and political, and have empowered their communities with their dedication and care.

Ackerman’s exhibition also stands as an inspiration and example to us all, that we must celebrate our women-kind, who empower and care for us. 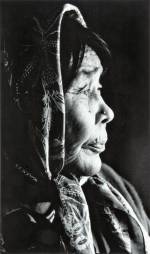