Phyllis Lambert and the Canadian Centre for Architecture

Phyllis Lambert and the Canadian Centre for Architecture

Phyllis Lambert is now in her 81st year and her long life is particularly associated with two buildings: the Seagram Building in New York and the Canadian Centre for Architecture (CCA) in Montreal. In the creation of both, she played a major architectural role, while neither would have become what they are without the passion, energy and drive which she says are the three forces that have guided her life.

Returning to North America in 1954, her father sent her a picture of the proposed Seagram Building which he was about to build on Park Avenue, New York. The picture horrified her and she wrote a long letter to him that began with the words, 'No, no, no.' As a result, he suggested she became the building's Director of Planning and so Lambert went to see Philip Johnson, then Head of Architecture at the Museum of Modern Art, for help in selecting an architect. The result was the bronze and glass skyscraper designed by Mies van der Rohe and Philip Johnson that is still regarded as one of the most important on New York's skyline. And, years later, Johnson told the architectural magazine, ARQ, 'As a controller of taste, as manager of people, as persuader of her father, as a supervisor of the actual building, as controller of every piece of interior, she was completely in charge. She was more than a hard worker; she was genius in both the artistic choices and the most unpleasant negotiations.'

As a result of her role in creating the Seagram Building, Lambert discovered her passion for architecture, enrolling as a student at Yale before going on to the Illinois Institute of Technology in Chicago where Mies was head of the Architecture Department. Then followed a number of architectural commissions before Lambert returned to Montreal following her father's death in 1971 (Mies died in 1969). Two years later, Lambert became director of the Groupe de Recherche sur les Bâtiments en Pierre Grise de Montréal that was examining the role played by the city's grey stone buildings in relation to Montreal's urban character. Her work, which included a photographic study, was aimed at defining government action and educating people about the role they can play in preserving their architectural heritage. 'Her actions are largely responsible for our collective patrimonial conscience,' says Dinu Bumbaru, policy director of Heritage Montreal, which was founded by Lambert in 1975.

The Canadian Centre for Architecture (CCA) stems directly from Lambert's concerns for Montreal's architectural heritage because, in 1974, a year after the Van Horne house in the city's Golden Square Mile was demolished at a time when Montreal was busy creating high-rises and expressways, she bought the 1874 Shaughnessy House in order to save it from a similar fate. Designed in the second empire style by William T. Thomas and now classified as an historic monument by the governments of Quebec and Canada, and following Lambert's founding of the CCA in 1979, the house itself contains the CCA and was opened to the public in 1989 after extensive restoration by Denis Saint-Louis. This included integrating a steel structure into its walls to enable the building to perform its new function and reconstructing interior details from existing elements using 19th-century techniques.

However, the most dramatic intervention has been to wrap an extension - designed by Lambert, Peter Rose and Erol Argun - around the two sides and rear elevation of the Shaughnessy House to provide a reading room, galleries, lecture theatre and bookstore that are open to the public. There are also state-of-the-art conservation and collection facilities, curatorial offices and a study centre, as well as vaults containing the CCA's extensive archives. These include some 250,000 books on architecture and related subjects from the Renaissance onwards; a reference library with an online service; prints and drawings; photographs; and the complete offices of James Stirling, John Hedjuk, Aldo Rossi, Cedric Price and (an ongoing collection) Peter Eisenman.

Visiting the CCA, one is immediately struck by the happy relationship between the two buildings, the exterior of the extension echoing, but not aping, the features of the older building, and grey limestone providing continuity. Once inside (though it is not clear at the front that the entrance is at the back), the CCA is notable for its very cool and pristine appearance, and its meticulous use of a limited number of materials: stainless steel, aluminium, blond Canadian maple and black granite. The interior is also notable for its use of natural light, the visual interlinking of the galleries and its relatively low temperature that helps to protect the exhibits.

From the beginning, Lambert saw the CCA as a new kind of institution that would increase public awareness of the role of architecture in contemporary society and promote scholarship in this field, as well as engaging in research, exhibitions and other activities. This is a brief that continues under the current director, Mirco Zardini, and is reflected by the exhibitions on until October: 'Will Alsop - Ontario College of Art & Design, an urban manifesto' and 'Some Ideas on Living in London and Tokyo by Stephen Taylor and Ryue Nishizawa'.

Alsop's exhibition describes the brief, wide consultation among all interested parties, and conception and design (notable for his use of paintings) of the two-storey 'tabletop' structure that was built at a height of nine storeys above the existing college of art and design to provide accommodation for the Sharp Centre for Design. It has proved a brilliant solution to the problem of there being nowhere to go but upwards - and of how to build above a building without disrupting the building underneath. Supported on brightly painted steel legs, its colourful exterior and surprisingly floating form may owe something to the time Alsop spent in Cedric Price's office, while its vibrant intensity that stands out in stark contrast to the surrounding environment has made it not only a popular icon, but a catalyst for transforming and revitalising Toronto's urban spaces.

The second exhibition features cardboard models of Nishizawa's town houses (plus a look at two that have been built and one still to be built) that express his belief in a close relationship between interior and exterior space, and the house and the city in which it is built. But the houses also resemble a village, since each consists of a cluster of independent rooms connected by terraces and exterior courtyards open to the street. Stephen Taylor, on the other hand, has developed ideas for residential building on a range of scales that includes individual dwellings, multi-units and even a master plan of a London area that mixes new buildings with existing ones. By establishing subtle relationships to the surrounding urban texture, his buildings are grounded on the street with simple but distinct facades separating public and private space. All three exhibitions meet the CCA's mission perfectly.

At the moment, the CCA is used by some 45 scholars a year working at different levels of research, as well as students from Massachusetts Institute of Technology, Princeton and Columbia Universities in the USA, and the University of Montreal. It also receives some 55,000 visitors annually and is looking for other ways - including its series of lectures, films, seminars, family programmes and guided tours - to link it more closely to the local population. The formality of the extension may be intimidating to some. Another drawback is that, despite the big lawn in front of the extension (which could possibly be used for more outside events), Montreal suffers from long, hard winters.

However, the CCA is fortunate - at a time when the Canadian Government is introducing swinging cut-backs to art funding in Canada - to be well endowed: as Steffen Boddeker, Director of Communications told me, it is the relatively small institutions that have to worry. What concerns the CCA is how the stock market performs, though this does not mean, of course, that the CCA is not grateful for the additional funding it receives from Canadian banks, Hydro Quebec and Lotto Quebec, as well as sponsorship for specific projects.

Within the CCA, Phyllis Lambert remains a continuing presence and, though no longer its founding director, she is now chairperson of the Board of Trustees. And, while no longer practicing as an architect, she is currently putting the finishing touches to a book on the construction of the Seagram Building. 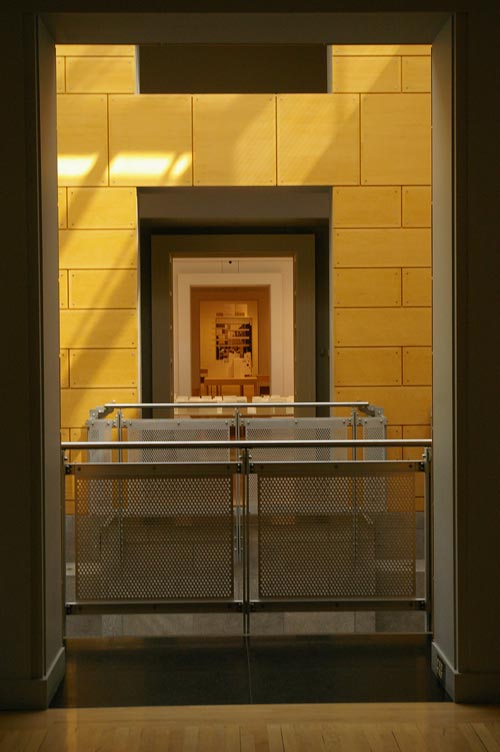 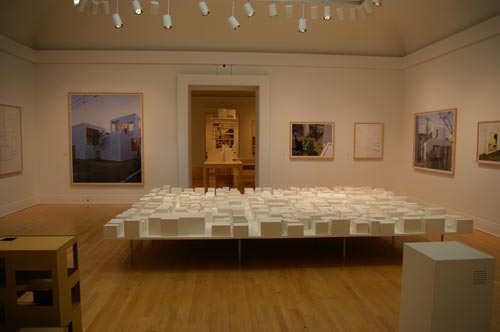 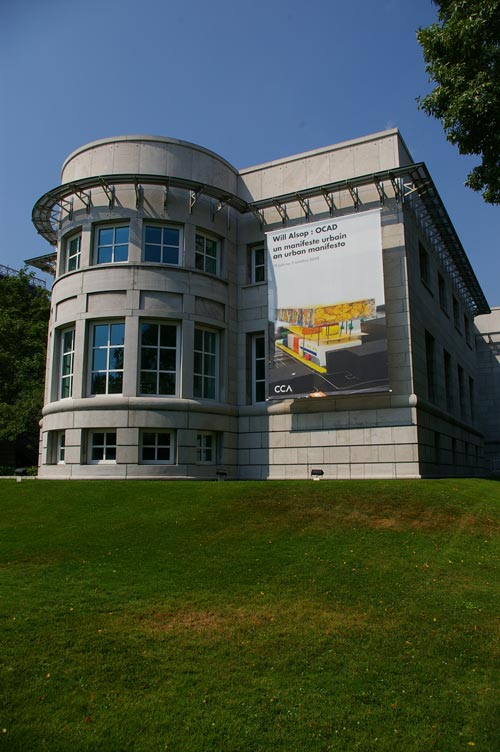 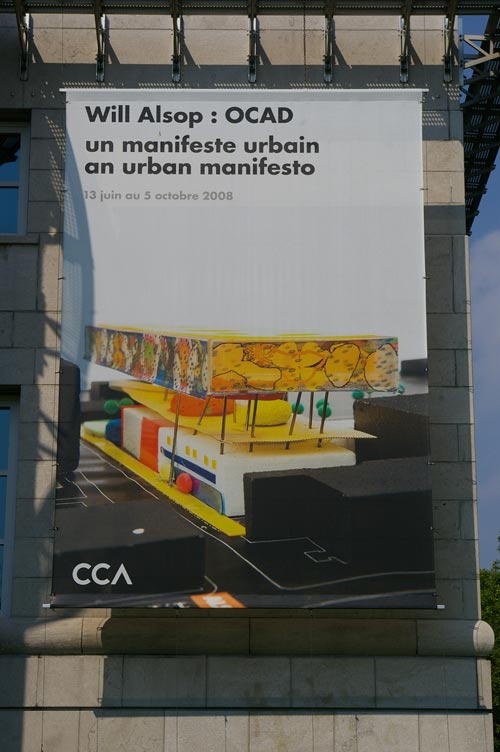 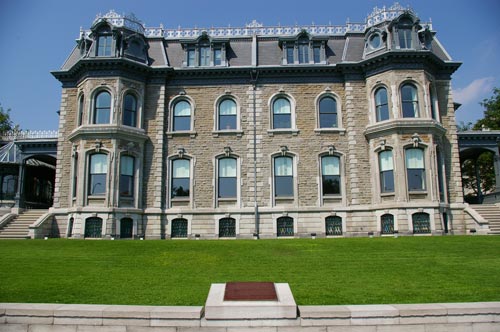 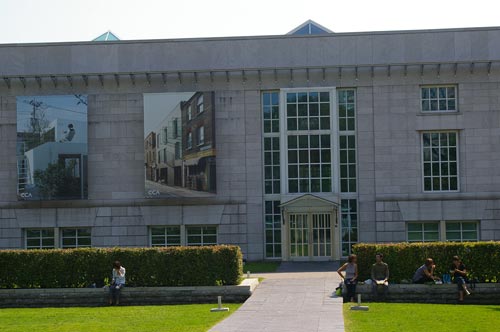