Starting from the Desert: Ecologies on the Edge – Second Yinchuan Biennale

Starting from the Desert: Ecologies on the Edge – Second Yinchuan Biennale

There are some strong individual showings at the biennale, but its curatorial framework is a mystery and, despite its title and location outside a vastly expanding city on the edge of the Gobi desert, it shows nothing that is critical of China’s environmental policy, state censorship or treatment of workers 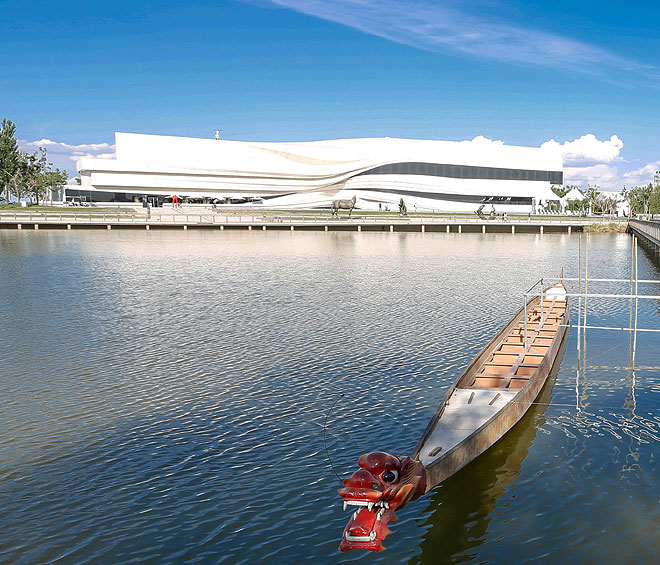 Sitting in a cafe in the northern Chinese city of Yinchuan, a friend and I are approached by an English-speaking postgraduate student. Vera is working a side-hustle as a waiter. She is keen to practise her English, so we ask about the neighbourhood, a corporate district that contains, among other things, a poodle parlour, a bank where you can withdraw money using facial-recognition software, two karaoke bars and a pastiche of a European bakery where we are eating breakfast. (On the menu are loaves of bread shaped like croissants that are filled with wine and cheese.) It is also the location of the Hyatt, the five-star hotel where the organisers of Starting from the Desert: Ecologies on the Edge, the second edition of the Yinchuan Biennale, have put up their guests. 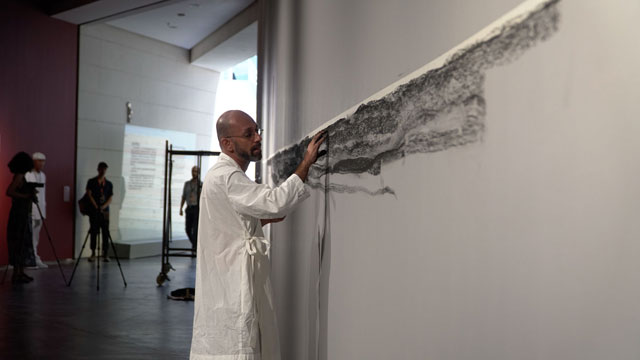 Vera tells us that the entire neighbourhood is no more than five years old. Where now there are shopping malls, busy roads and seemingly endless rows of identikit tower blocks housing employees of the Chinese government, recently there was only grassland and desert. The rapid development is partly the result of Yinchuan’s strategic location on Xi Jinping’s “Silk Road Economic Belt” project – an extraordinarily ambitious plan to roll out pipelines, railways, power grids and roads all the way from China to Europe, and, according to critics, evidence of Xi’s wish to consolidate China’s monopoly over global trade and infrastructure. Vera knows Yinchuan like the back of her hand, and she recommends a number of cultural sites for us to visit while we are in the city. “Have you been to the Yinchuan Biennale?” I ask. For the first time our volunteer guide is stumped. “It’s at the Museum of Contemporary Art.” Vera has never heard of either. 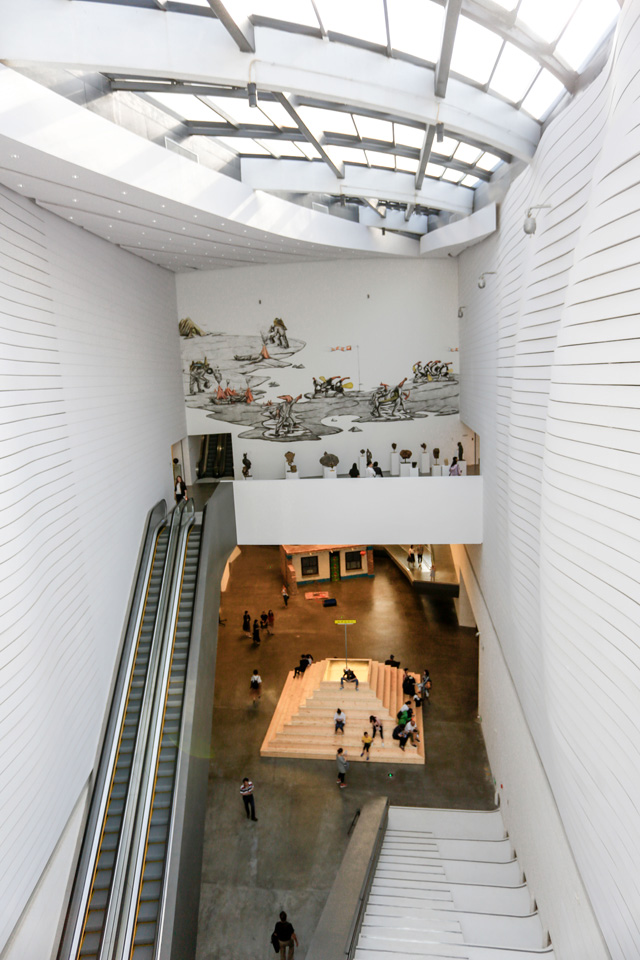 Contemporary art events have a habit of descending on places like neo-cultural hovercraft, paying lip-service to site-specificity while remaining largely disconnected from their surroundings. The Yinchuan Biennale is one such example. It takes place inside a white, Zaha Hadid-style work of hover-architecture improbably located in the desert between the border of China and Inner Mongolia, an hour’s drive from the city. I take a coach there with a small group of international art critics, participating artists and other cultural operators from the region. When we pull in to the deserted car park someone wonders out loud to a curator named Li, who has been flown in for the occasion from Zurich: “Who else but us will come?” “It’s China,” he replies. “They’ll bus people in.” 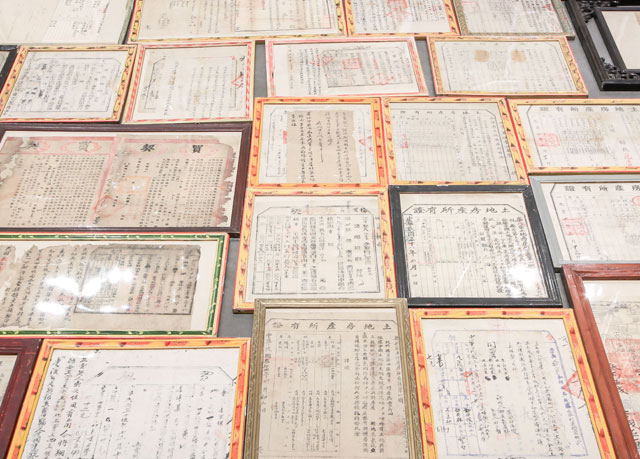 Who these people are remains a mystery. During the time I spend on site, the only visitors I see are also staying at the Hyatt, enjoying the brand new seventh-floor swimming pool, and drinking the complimentary supply of wine produced locally in Ningxia province. Among the group, there are some interesting figures: the artist Mariam Ghani, daughter of the president of Afghanistan and member of the Gulf Labor Artist Coalition, who is exhibiting a chalk map detailing the regional languages spoken across China; Bose Krishnamachari, co-founder of the Kochi Biennale and curator of the inaugural Yinchuan Biennale; and the current curatorial team, headed by Marco Scotini, an Italian who is dressed for the opening like a Milanese Roy Orbison, in a black suit and Wayfarer sunglasses. 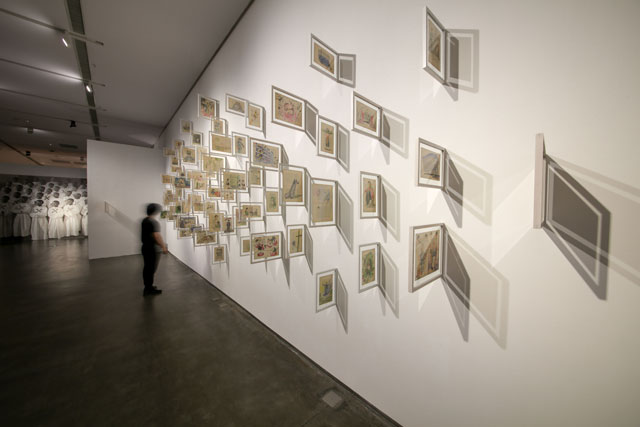 The mystery of the audience is trumped only by the mystery of the curatorial framework, which is so couched in what Alix Rule and David Levine termed International Art English that it would require a dedicated team of art-speak codebreakers to decipher it. “The Second Yinchuan Biennale seeks to read the modalities of ‘group-being’ at the crossroad of heterogeneous components,” reads an announcement posted on e-flux. The handbook continues in the same vein. In the absence of legibility, I find myself cast adrift at the MOCA, attempting (and failing) to piece together the rationale behind the selection on show, of 90 artists from 30 regions, and considering the motivation behind the perplexing decision to include the work of numerous Italian artists, among them arte povera superstar Alighiero Boetti, beyond the fact that are Scotini’s countrymen. 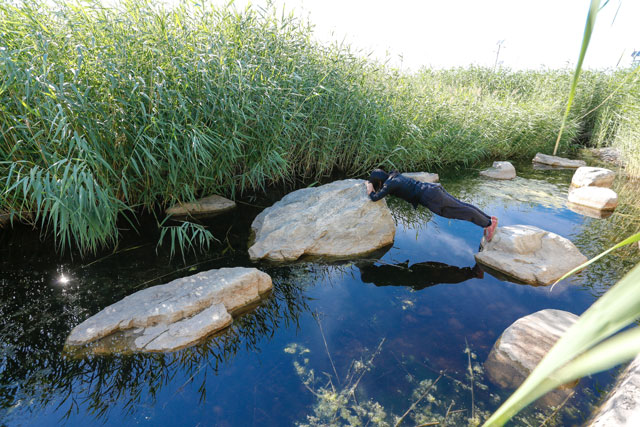 Despite the overall confusion, there are some strong individual showings. On the ground floor, Freedom Farming (2014), a film by Li Binyuan, catches my attention. In it, the artist holds up a sheet of wood while he stands in a flooded paddy field and attempts to block the flow of dirty water cascading down on him from a waterfall. In the process, he is repeatedly knocked over by the force of the water – a tragic-romantic scene of perseverance in the face of futility, and a comment, perhaps, on the impact of industrialisation on traditional farming. 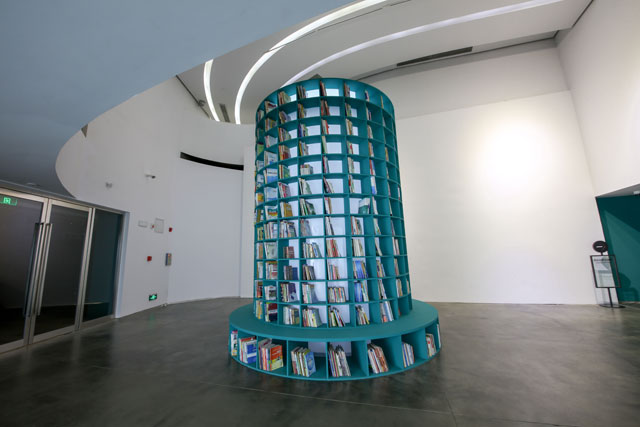 Scotini was doubtless obliged to perform various contortions to remain within the good graces of Chinese state censorship – one potential reason why the exhibition literature is so obscure. (Industrialisation is not mentioned in relation to Li’s film, nor its impact on the environment.) But there are moments when, should a viewer pay attention, the works on show reveal hidden political histories. Such is the case with a series of paintings produced by Huxian peasants from the late 1950s to the 70s. They depict bumper harvests, happy workers and crops of corn so bountiful that a single cob can fill an entire train. The contrast between these joyous scenes and the reality faced by many Chinese peasants at the time they were produced couldn’t be more stark. Between 1959 and 1961, millions starved in The Great Famine – the result of calamitous changes to farming policy in which grain reserves were centralised. Instead of bumper harvests, corpses filled ditches – and more people died in China at that time than all the people killed during the first world war. 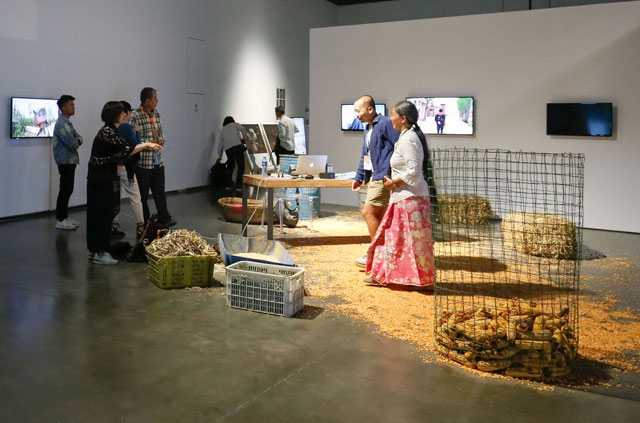 Unsurprisingly, The Great Famine isn’t mentioned in the biennale handbook. It would be easy to overlook the context in which the Huxian peasants’ paintings were produced and read them instead as charming and naive cultural documents – particularly given the prevalence of explicitly political and critical work on show by foreign artists. Karan Shrestha, for instance, shows Stealing Earth (2018), a film about the destruction of indigenous communities in Nepal’s Chitwan national park, along with a drawing in which the ears of the park rangers are subjected to the serpent-tongues of corrupt government officials. Navjot Altaf’s multichannel video Soul, Breath, Wind (2015-18) tells of the effects of mining in the central Indian state of Chhattisgarh, and the manner in which it has displaced residents and destroyed ecosystems. Also on display are a selection of photographs by Tina Modotti from the 1920s, documenting revolutionary labour movements among agricultural workers in Mexico. For all the diligent, politically motivated documentaries and exposés, there is nothing that explicitly alludes to the situation in China – nothing that speaks directly to its environmental policy, state censorship, abuse of workers, or the colonial ambitions of the Silk Road Economic Belt scheme. In such a context, artists intending to spread the word about wrongdoings in their home countries may find that they are inadvertently helping to frame China as a beacon of tolerance in an otherwise morally compromised region. 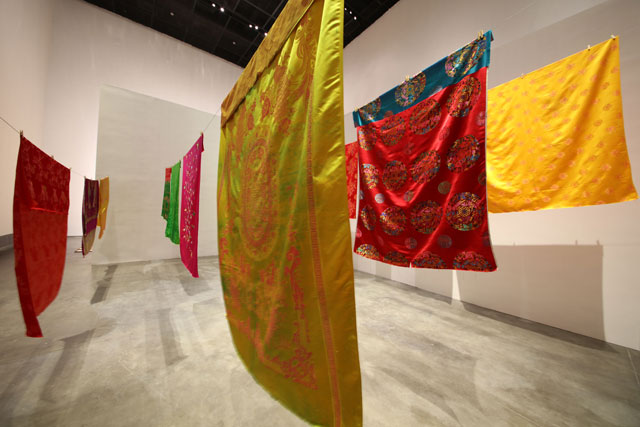 In order to explore the city, my friend and I stick around for 10 days, despite being warned by fellow biennale guests that there is nothing to do in Yinchuan, and that we really ought to head to Beijing. It soon transpires that few of the guests have travelled beyond the corporate district or the dusty MOCA and into the older part of the city, where there is an extensive network of market streets, communal dancing in the squares at sundown, and the street fashion on sale changes on a daily basis, as does the bastardisation of brands (Gncci, Balencigaga, Nuke, Spureme, among them) – testament to the rapid turnover of goods in the world’s factory, and a complete disinterest in enforcing copyright laws. Yet nothing of Yinchuan features in the biennale: not the street culture, its strategic positioning on the new Silk Road, or the manner in which the city is rapidly gobbling up the very desert on which the biennale is ostensibly thematically based. Ecologies on the Edge is a suitable title for a biennale fundamentally estranged from the location in which it is held. But not, perhaps, for the reason it is supposed to be.