Beijing's Capital Museum has emerged from obscurity to become a leading Chinese cultural institution, attracting visitors with its easy accessibility and frequently changing temporary exhibitions. Judging by attendance records, the museum is off to a successful start. For the first five months of 2007, it has received more than 166,000 visitors, and it is on course to exceed by the end of 2007 the annual number of visitors (350,000) recorded at the Metropolitan Museum of Art in New York. The dramatic rise in public attention and attendance is symbolic of China's growth as a cultural centre. Notable is much less restriction from management and an eagerness to serve, rather than dictate, public taste. 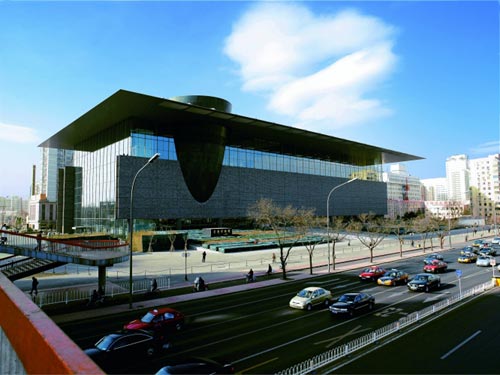 Until a few years ago, a person seeking directions to the museum from a Beijing resident might have received a blank stare and the question: 'Is there such a museum in Beijing?' In fact, the Capital Museum has existed for more than half a century. After the civil war in China ended in 1949, Beijing started to reorganise as the nation's political centre. As the city was rapidly rebuilt, officials made plans, beginning in 1953, to establish a museum. Still, although the seeds were planted in 1953, it took nearly two decades for the museum to open to the public. And even after it officially opened, it contained few remarkable artworks in its collections and did not actively organise exhibitions.

One reason for the delay, perhaps, is that other locations in Beijing served as major fine arts centres. The Palace Museum and the National Museum of China were considered to be the two leading institutes that no other museums were able to compete with. The Palace Museum, which is situated inside the 'Forbidden City', the dynastic palaces of the Ming and Qing empires, showcases thousands of fine examples of Chinese civilization in the imperial collection that had not been taken to Taiwan by the defeated Nationalist forces. When the National Museum of China was constructed in the 1950s in the center of Beijing, provinces all over the country were eager to supply their best collections to the museum. Today, this flow of fine art to Beijing is ebbing as the provinces race to develop local tourism and cultural landmarks.

Despite the loss of this valuable source of artworks and historical objects, in 1981 the Capital Museum did secure a home: 2,000 square metres inside buildings of the Temple of Confucius. Officials have claimed that the inaugural collection included some 83,000 objects, mostly from excavations made in Beijing and its adjacent suburbs after the 1949 founding of the People's Republic of China. This location has had positive and negative effects. On the one hand, the museum is barely visible among the 100 or more museums, galleries, and many more historic sites, across the city. But the Temple of Confucius is one of China's most important centres of Confucian learning, and its proximity to the nearby Tibetan Yonghegong, or Lama Temple, guarantees a flow of tourists, accidental or otherwise.

Beijing's bid to host the 2008 Summer Olympics was the turning point for the museum's fortunes. Starting in the early 1990s, the Beijing municipal government decided that the ancient capital needed a facelift. As officials drew up plans for constructing a national capital on a par with China's increasing presence and reputation on the international stage, public support for building a world-class modern cultural institution rose. And so, in 2001, the museum was granted a prime site on the western side of the Avenue of Eternal Peace, or Chang'an, the city's key east-west boulevard and the headquarters of many ministries and state corporations. By May 2006, the Capital Museum, now housed in an impressive structure, formally opened to the public.

Jointly designed by Jean-Marie Duthilleul of the French-based AREP Company and Cui Kai of the China Architecture Design and Research Group, the museum building incorporates ancient and modern elements. The dramatic exterior includes the protrusion of the unusual elliptical-shaped exhibition hall through the roof, symbolising the unearthing of ancient relics. The entrance cavern is framed by a massive steel canopy and a glass curtain that would not be out of place in the most modern exhibition venues across the globe. Once through the Grand Hall, visitors can wander through the seven permanent exhibitions of antiquities located in the spiral hall. (The recommended direction is from the top down.) Others may choose, first, to view three themed exhibitions contained in a rectangular block-shaped centre located on the building's western side. Beyond the public spaces, the building also houses an area for administrative use and scientific research.

Some foreign commentators have noted China's mastering of the so-called 'hardware' of major projects at the expense of finer details. Such criticism might apply to the Capital Museum. While the superficial structures are, indeed, impressive, the collections and displays fall far short of the city's lofty ambitions for the centre. For instance, while the museum boasts some 305 first-class, museum-quality objects, from a total collection of approximately 200,000 pieces, the general quality of the antiquities is rather moderate by international standards. Two outstanding artefacts should be on every visitor's must-see list: the bronze 'Li' tripod, 'Bo Ju Li' of the western Zhou period (11th century-771 BC), and the exquisite porcelain 'Water Moon' Guanyin statue of the Yuan Dynasty (AD 1271-1368).

Similarly, the thematic display areas offer somewhat mixed experiences for the visitors. For example, the 'Ancient Capital: A Chapter on the History and Culture of Beijing' display covers the city's ancient history from prehistoric times to the present. One can imagine the difficulty in representing thousands of years of history in an area measuring less than 2,400 square meters. Perhaps keen to provide an international context for local history, the curators have inserted a chart of world history throughout the gallery. Rather than clarifying and amplifying the material, the chart clutters the exhibition hall. Two other main thematic displays provide a more satisfying experience, particularly for Beijing residents who are nostalgic for the city's famous Hutong, or courtyard, architecture, now mostly replaced by a towering forest of apartment and office blocks. The 'Ancient Capital: Urban Construction' exhibition focuses on city planning, urban functions, buildings and water systems and includes many original and fabricated construction materials. The third exhibit, 'Stories of the Capital City - Old Beijing Folk Customs' recreates the elegant Hutong life of the late Qing Dynasty (AD 1644-1911) and the early years of the Republic of China. Among other displays, visitors will see a reconstruction of a typical quadrangle courtyard, complete with furniture and life-sized models in costume performing wedding and other ceremonies. The latter scenes, in particular, are likely to be novel experiences for many local and overseas visitors and contrast starkly with the manic mix of building cranes and construction sites outside the museum.

Visitors, commenting on websites and blogs, have noted the friendly, approachable staff, easy access to information and frequency of changing special exhibitions with art and objects from China and abroad. The museum's staff say they are most proud of the building's sophisticated technologies. In addition to meeting standards for temperature and humidity control to preserve and display valuable exhibits, the museum also has installed solar power panels and energy-saving lamps that place the Capital Museum at the forefront of environmentally friendly museums and cultural institutions in China.

In the galleries, the multimedia techniques are used in different degrees. Visitors can use computer touch-screens to manipulate the detail of certain exhibited objects by rotating the images 360 degrees. Large screens showing visual reality images and digital movies enhance the atmosphere of many displays. A personal digital assistant (PDA) guiding system provides visitors with a personalised service inside the galleries: it automatically plays the introduction to the exhibit when a visitor walks into a certain gallery. The visitor can even send information from the gallery directly to his or her email account.

Among Chinese museums, continually rotating special exhibitions is unprecedented. Since its trial opening in December 2005, the Capital Museum has held more than 17 temporary exhibitions. These include more than ten on foreign subjects and seven directly from non-Chinese cultural organisations. For the first time since its establishment, the British Museum sent 270 objects - including ancient relics from many parts of the world - for a 2006 exhibit, 'The Treasures of the World's Culture'. Ancient civilizations from Mexico, India and Italy have also had exposure in the museum.

Modern and contemporary artworks have figured prominently in the curators' plans to foster a young and fashionable image for the museum. For example, exhibits of Russian Socialist Realist paintings, the French invention of photography and photographs by French photographer Willy Ronis. In March of 2007, 'Aftershock: Contemporary British Art from 1990-2006' travelled to the Capital Museum from Guangzhou in southern China. The display showed works by 12 artists from the Young British Artists (YBA) group, including Jake and Dinos Chapman, Mona Hatoum, Damien Hirst, Douglas Gordon, Sarah Lucas, Marc Qwinn and Mark Wallinger. The messages of confrontation and cynicism portrayed in the art works by the YBA artists are still novel to a Chinese public whose lives are held to be guided by the 'Eight Honours and Eight Shames' proposed by President Hu Jintao to create a harmonious society. As the role of contemporary art grows in rapidly changing Chinese society and culture, of course, Chinese citizens will encounter such messages more often. As part of China's art history, 'Aftershock' will be remembered as a milestone.

Later this year, the museum will stage several exhibitions, including one featuring the work of Catalonian architect Antonio Gaudí and another on Classical Greek art from the Louvre. Ms Pei Yajing, a curator on ceramics, said the museum has not yet finalised its exhibit schedule for the Summer Olympics. The National Museum at Tiananmen Square is undergoing renovation through the 2008 Summer Olympics, so visitors from all over the world will likely find their way to what is now the city's largest museum. And, given China's ambition to use the Olympics as a national showcase (just as Japan and South Korea did when they hosted the event), most likely the directors of the Capital Museum will plan a blockbuster exhibition for what promises to be record-breaking crowds. 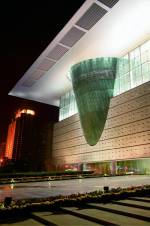 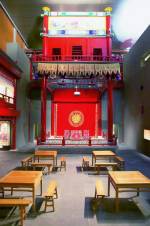