The RA’s annual open submission exhibition presents a shifting ‘kaleidoscope’ of contemporary art – but what does it show us about art now? 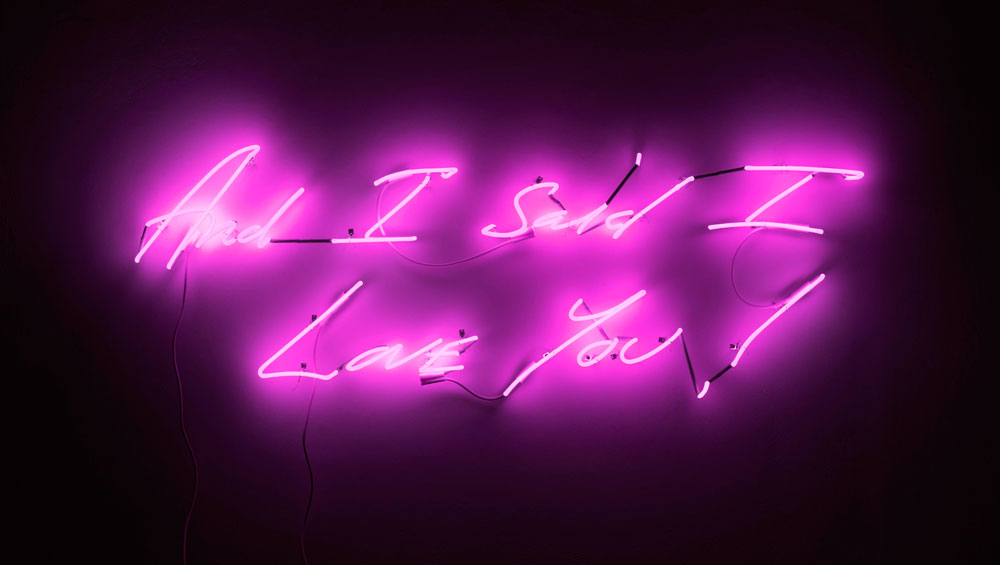 As London’s Royal Academy teeters on the precipice of its 250th anniversary next year, one wonders how its Summer Exhibition has changed from year one to year 249. There is certainly more abstraction, more stylistic and thematic variation and possibly more colour – and film, photography and digital art have (just about) permeated the grandiose classical corridors. What has probably not changed is the sprawling, chock-a-block nature of the layout. Granted, a few of the 14 spaces in this year’s exhibition give their inhabitants (the gallery-goers as well as the artworks) a little more room to breathe. And it is no wonder that space continues to be at a premium, with 12,500 submissions from artists both emerging and known whittled down to a “mere” 1,092 works by the show’s selection and hanging committee.

The love-hate absurdity of the Summer Exhibition’s dense format is reinforced this year in its first room, the Wohl Central Hall. A clunky, two-wheeled vehicle bearing precariously balanced glass bottles takes a central plinth, its Duchampian uselessness echoed by a suspended spinning bicycle wheel adorned with peacock feathers. A group of pleasant, cloudy landscapes cluster on one of the walls, while two of Tracey Emin’s anxious neon utterances face off across the room (“I Did Not Say I Can Never Love You / I Said I Could Never Love”; “Never again!”) and Yinka Shonibare’s Angel (Red) reflects the distorted visage of Jim Dine’s Poet Singing, First Version. Meanwhile, a profound political statement is made by Mathilde ter Heijne’s Woman to Go – a rack of postcards depicting anonymous female subjects, each inscribed on the reverse with biographies of other little-known but high-achieving women from history. Yet its provocation is muffled by its inclusion in the visual melee and by the fact that the postcards can’t be taken away and treasured by visitors as in previous installations of the work, owing to the £12,500 price tag. The women are not “to go” after all, but are to be admired, consumed, bought and sold. As if to summarise what we are all thinking, a dizzying coloured dot painting by Tom Phillips emits the desperate Beckettian cry: “I can’t go on, I’ll go on.”

Thankfully, the zigzagging tensions between the political, the emotional, the picturesque and the humorously futile disappear in the following few rooms, and the atmosphere lightens. It is as if the curators saw, following the confusion of the Wohl Central Hall, that playfulness, colour and broad aesthetic affinities were an acceptable way to hang an exhibition space after all. Room III, which is curated by artists Eileen Cooper and Bill Jacklin (and, confusingly, precedes Rooms I and II), is filled with light, allowing the bright, abstract paintings on its stacked walls to sing. Particular highlights include Donald Sultan’s Aqua Button Flower June 30 2015, Mick Moon’s three paintings, At Sea, Dusk and Pause, and Georg Baselitz’s upside-down drawing of a seated nude. Room II emphasises geometry and bold tones. The dark rectangles of Sean Scully’s enormous Full House are reiterated in Cornelia Parker’s fragile-looking, black patinated bronze cast of pavement cracks – although Parker’s piece is displayed on a plinth rather than directly on the floor, numbing its connection to the physicality of walking.

Contrast this with the tessellated patchwork of Room I, curated by Gus Cummins. Exceptionally compactly hung, this space shows the greatest diversity of artworks in all senses: small studies of plants and figures merge into surreal and fantastical landscapes; pastel effects are overtaken by acrylic boldness, and monochrome by almost neon hues; canvas shapes jump from rectangular to triangular and back again. The works in this room vie for eye-space; many compete and most fail. Anthony Green’s pendant portraits of himself and his wife (Mr Green Looking at his Wife and Anthony’s Mary – A Golden Wedding), which stare out from brilliant yellow and green backgrounds as if pleading for escape from the brimming walls, offer a welcome narrative amid the morass of largely mute imagery.

Some relief is offered in the Large Weston Room, which is filled with architectural drawings and models – buildings drawn, digitally rendered, shown from surreal angles or etched into glass, depicted as mathematical formulae or emerging from foundations to finished product. After the painterly abstractions of the previous few rooms (not to mention their baffling form of display), the potential realities offered by these detailed, obsessive depictions of architectural structures are refreshing, showing a relatable abstraction: places and dimensions that can and will exist.

Also not to be missed are the two sculpture rooms curated by Ann Christopher. The wall text for the first (Room IV) gives a basic description of how sculpture reshapes our physical environment and allows art to project out from its own hallowed space and into ours. Although seemingly patronising to some, this description declares Christopher’s decision simply to show work, not to try to be conceptually clever in the constrained setting of the RA Summer Exhibition.

Christopher’s selections range from the serious to the amusing. David and Melissa Eveleigh-Evans’s Axis Mundi (Untitled I), a vertical line of large blood-soaked polystyrene orbs, offer a sinister effect through their musty smell and subtly anthropomorphic waving and tilting. This is paired well with David Nash’s morbid tree, Red Around Black, which invites one into its burnt and hollowed core, offering a tight space for hiding or a coffin for resting. Nearby, Stephen Cox’s Butter Puja (prayers) consists of basalt faces each with one set of features (ears, or eyes, or a nose) with butter and gold leaf thrown on to them in an apparently spiritual, votive act. Yet the rich butter soaking greasily into the surface and the Mr Potato Head-style mix-and-match visages render Butter Puja comically ritualistic. Similarly, in Lisa Milroy’s Tea Bowls, four identical oil paintings of this piece of ceremonial crockery with “cut here” dotted lines around each, one image has jumped out and wrapped itself around a nearby stretcher, as if ready for sale.

We return to a thematic emphasis again near the end of the show with Cooper and Jacklin’s Room IX, its text explaining that the objects in the dimly lit space relate to intimate experience and personal reflection. Like those in Christopher’s Room IV, however, the objects feel more explicitly spiritual or cultish. Gilbert and George’s Beard Speak, in which two devilish representations of the artistic duo are shown against their classic stained-glass window-effect background, are surrounded by amusing classified adverts for “Pearly Penile Papules.com”, Indian spiritualists and colonic hydrotherapy. Ann Carrington’s Wing Wo is a stunning ship and seascape made of real and fake pearls, a shrine to decadence and vanity, while the transparency on lightbox Grand Tour II: Homage to Soane (After Gandy) by Emily Allchurch shows reverence for history as a religious act, with modern-day photographers seen peering back on to a classical landscape that becomes more fantastical and painterly with its chronological recession.

While submissions are open to all and the artworks are contemporary (one assumes, although no dates are given in the list of artworks), the RA Summer Exhibition rarely seems to give a snapshot of art “now”. Is this because it is a selling exhibition? Or because of its overemphasis on works in two dimensions and conventional media? Its inclusion of an overwhelming proportion of work by Royal Academicians? The crammed hang and the way each piece is stripped of ideas and context? “This is a room in which the kaleidoscopic nature of art can best be appreciated,” states the final line in the wall text for Cummins’s Room I, but it feels apt when applied to the show as a whole. The artworks turn, shift, reflect off one another, form threads that quickly disintegrate and reform across the room, or in another one entirely. It is this that makes the Summer Exhibition as exciting a viewing experience as it is an impossible one. It is best to visit twice, with plenty of time, to construct a personal narrative of what you see. Of course, the £14 ticket fee may well put you off a double (or even a single) visit and although, technically, you get plenty for your money (1,092 pieces works out at just over 1p per artwork), the price is another factor that underscores the limitations of this supposedly democratic exercise. 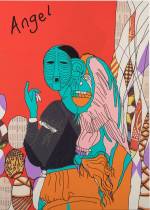 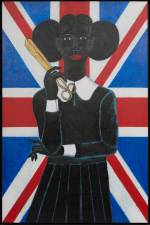 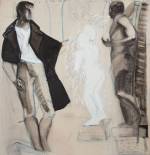 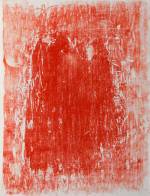 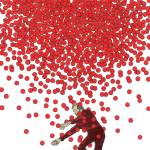 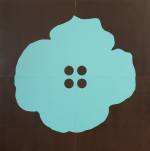 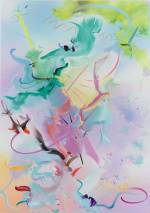 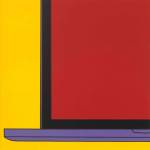 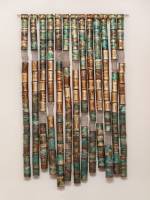 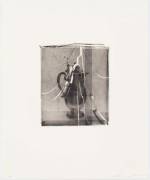 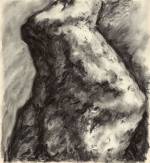 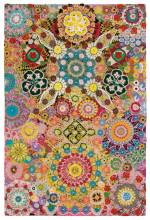 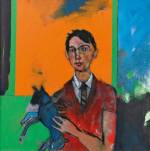