This year's innovative Summer Exhibition at the Royal Academy, London was selected and organised by Allen Jones and David Hockney. It celebrated the art of drawing as part of the creative process and the results are both fascinating and varied. As well as displays from painters, sculptors, printmakers and architects, there are drawings by surgeons, mathematicians, choreographers, composers and cartoonists and the manager of the England rugby team. 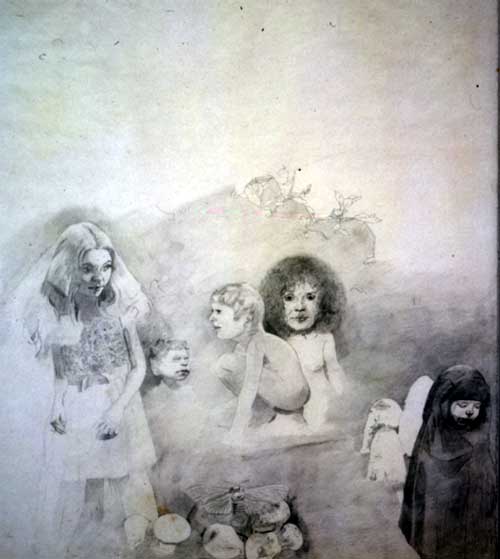 This year's innovative Summer Exhibition at the Royal Academy, London was selected and organised by Allen Jones and David Hockney. It celebrated the art of drawing as part of the creative process and the results are both fascinating and varied. As well as displays from painters, sculptors, printmakers and architects, there are drawings by surgeons, mathematicians, choreographers, composers and cartoonists and the manager of the England rugby team.

Drawing underpins the work of Hockney, who in his lecture (10 June 2004) 'Drawing in the Age of the Camera', claims that drawing can capture the truth of a situation better than a photograph. Allen Jones states, 'Along with talking and singing, drawing must be the oldest form of communication. Whereas talking and singing could be called spontaneous reflexes, drawing demands premeditation and clarity of execution.'1 'Drawing for me', he says, 'is a scaffolding on which to hang colour. I like to feel that the sub-structure is fully resolved in its own terms before commencing a painting.'2

The focus on drawing has resulted in a rare insight into the working method and creative processes of a very wide range of artists and non-artist professionals. To demonstrate these processes Royal Academicians, from Antony Gormley and painter RB Kitaj to architect Frank Gehry have submitted drawings as well as paintings, sculpture, prints and architectural models. Printmaking occupies an interesting position within the overall exhibition for many artists, who work in areas of printmaking often describe their mark-making on metal plate or stone as a particularly important manifestation of drawing - spontaneous but considered.

In addition to the RAs, Allen Jones and David Hockney invited a number of artists to submit drawings, some of whom would not normally exhibit at the RA, namely: Damien Hirst, Frank Auerbach, Michael Craig-Martin, Tracey Emin, Leon Kossoff, Rachel Whiteread. The amount of information within the work of the individual artists’ work and collectively as an exhibition is massive. The atmosphere created is exciting and celebratory; the effect is highly instructive. As Frank Whitford points out in his 'Introduction' to the catalogue:

The art critics, who tediously complain that the Royal Academy’s Summer Exhibition is as changeless as the man in the moon, may be caught short by some of the ways in which this year’s show differs from last year’s. This is itself evidence of the Academy’s continuing desire to move with the times without doing injury to time-honoured traditions … This show is the most varied, and therefore the most informative, group exhibition staged anywhere in the world.3

The Royal Academy’s popular Summer Exhibition has been an annual event since 1768. It is the largest open contemporary art exhibition in the world, drawing together a wide range of new work by both established and unknown living artists. Held annually since the Royal Academy’s foundation, it is a showcase for art of all styles and media. It encompasses paintings, sculpture, prints and architectural drawings and models. Today, over 1,200 works have been selected from over 10,000 entries, representing some 5,000 artists. Following the long Academy tradition, the exhibition is curated by an annually rotating committee whose members are all practising artists.

If the most basic definition of drawing is: 'the record of a tool moving across a surface',4 then perhaps the most interesting thing about drawing - as distinct from other forms in the plastic arts - is the very directness of the transmission, be it impulse, feeling, perception or concept. Drawing reveals the subtlest movement, the most clinical analysis, the most precise drama. Modern drawing gives room for alternative reactions - functions assumed by different signs are at once explicit and suggestive. In this sense drawing is as much a record of the subtler elements in our culture as any written or verbal record. The language of drawing, however - the meaning that can be derived from the arrangement of lines and marks on a surface - is less familiar to most observers and as John Elderfield has noted 'Drawings have not, by and large, been subjected to as keen and rigorous art-historical scrutiny as they deserve'.5

As this exhibition reveals, drawing is not the sole preserve of artists, but is used in a wide range of professions. For Allen Jones and David Hockney drawing is fundamental and they have both articulated their thoughts on drawing over the years. In order to explore the role of drawing in a media-oriented culture, the two artists chose to invite a number of people working outside the visual arts to contribute lectures and drawings to this year’s Summer Exhibition. Gallery VI is dedicated to the drawings of two Nobel Prize winners, a film director, fashion designers, doctors, dancers and a rugby manager.

Jones invited British movie director Alan Parker whose films include Fame, Angela's Ashes and Evita, to exhibit the four sheets of his storyboard for Midnight Express (1978). His drawings are spontaneous rather than meticulous:

I've never had conventional storyboards on my films, preferring the organic approach. However, every day on a shoot, I find myself scribbling in order to describe a shot to the cinematographer or camera operator when words fail me … Sometimes the script gets scribbled on - these are the drawings that survive.6

Clive Woodward's drawn strategic plan for a rugby game is exhibited. Heart surgeon, Francis Wells uses pictorial notes to illustrate aspects of operations using the 'normal' practice of drawing on sterile paper with forceps dipped in the patient's blood. 'Drawing' he says, 'is a pretty powerful intellectual process.'7 Model-making - drawing in three dimensions - is fundamental to thinking in chemistry for Nobel Prize-winning scientist Harry Kroto, although he concedes that drawing was more important to physics and chemistry in the 19th century but that computer technology facilitates drawing in three dimensions, playing a central role in many branches of science.8 'Unconcerned with aesthetics, or even with training the eye and hand, they use drawing to explain, record and aid understanding.'9

The Summer Exhibition at the Royal Academy displays the seriousness with which artists today approach the phenomenon of drawing. This has not, however, always been the case. Until the 1980s figurative drawing was essentially a private activity, having, in effect, fallen from grace. The advent of photography is usually cited as the impetus for artists to break away from drawing from life followed by abstraction in art. In the hands of the academies, drawing became an outmoded ritual and lacked personal, immediate force. Figurative drawing was little more than a teaching skill and considered historically as the foreplay to high art, a study or sketch for a major work. Innovation was prized above traditional skill. As Allen Jones writes:

In the mid-20th century in the United Kingdom, life drawing, anatomy, perspective and lettering were removed from examination. The old National Diploma of Design was reformed by a government bent on modernising art education.

It was perhaps time to review teaching practice in the light of changing attitudes and the teachings of Paul Klee at the Bauhaus became the basis of the new diploma. However, the schism between old and new subjects was exacerbated by the new method being incorporated into a foundation course, rather than a postgraduate course.10

In the last 20 years, there has been a growing awareness of the potential of drawings as works of art in their own right. Technology and conservation skills have helped to exhibit works that had previously been considered too fragile, and the scale of drawings has, in many cases, increased in line with its new status. Abstract drawings can now be appreciated alongside perceptual works as manifestations of the many and varied strands of contemporary art practice and culture. Publications on drawing and exhibitions such as that organised by John Elderfield in New York in 1983, 'The Modern Drawing: 100 Works on Paper from the Museum of Modern Art', have heightened awareness of the nature and importance of the drawn image. Paul Klee, wrote one of the most significant comments on drawing in The Thinking Eye:

Here we must be very clear about the aim of ‘making visible’. Are we merely noting things seen in order to remember them or are we also trying to reveal what is not visible? Once we know and can feel this distinction, we have come to the fundamental point of artistic creation.11

Pride of place in the Summer Exhibition has been given to memorial displays of RAs who have died in the past year - Colin Hayes, Patrick Prockter and Terry Frost. Keeper of the Royal Academy, Professor Brendan Neiland, had the difficult task of presenting widely disparate works in printmaking from Noman Ackroyd's gentle poetic 'Ludlow', to Gillian Ayres' dramatic and lovely hand-coloured etchings.

Gallery III is a triumph. Unified by Hockney’s idea of painting, the walls are a stone colour instead of the usual severe white and the works are beautifully hung and lit. John Bellany’s works are consistently accomplished and brilliant. Hockney’s massive recent watercolours dominate the end wall: 'They’re just watercolours, yet you can see them right from the other end of the room'. Unlike photography, watercolours (as Hockney points out) 'let the hand show. That's why I use very liquid paint and huge brushes'.12 In the same gallery Ellsworth Kelly, one of the newest honorary RAs, exhibits his large, recent minimal abstract painting, 'Two Curves'. Beside it a drawing of 'Mont Sainte Victoire', showing the value that Kelly places on drawing. By choosing Cezanne's favoured subject and place, Kelly also pays homage to the history of Modernism and the importance of what Allen Jones calls the, 'scaffolding on which to hang colour'.

Jones and Hockney have breathed new life into the Summer Exhibition and in doing so have injected new significance into the role of the Royal Academy itself. Critic Robert Hughes in his speech 'Blank Canvas' argued that in an age where mass media bombard us with misleading images, we need the Academy to stand for the values of art more than ever. We need, he says, to slow down and spend more time learning to look.13 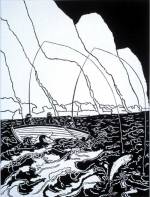 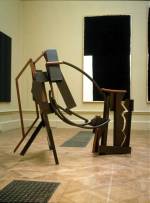 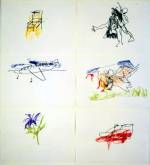