Louise Bourgeois: A Woman Without Secrets

Louise Bourgeois: A Woman Without Secrets

Louise Bourgeois is best known for her spider sculptures, including Maman for Tate Modern. This exhibition of her later works is akin to a self-portrait, a web of contradictions and ambiguities, says Anna McNay

“When does the emotional become physical? When does the physical become emotional? It’s a circle going round and round.” Louise Bourgeois (1911-2010) posed these questions in 1991, speaking about her series of sculptural works, Cells. “Fear is pain,” she went on, before admitting that emotions are the primary subject of her work – emotions, contradictions and the childhood trauma of living with the knowledge of her father’s affair with her English governess.

The feisty and widely read artist, born in Paris, but an American citizen from 1955, died not long before reaching her centenary. She left behind a great body of work examining the interplay between such opposites as male and female, father and mother, soft and hard, exterior and interior, vulnerability and strength. Her recurring motifs at first appear simple, but, as her assistant and friend for more than 30 years, Jerry Gorovoy, says: “The more time you spend with her work, the more complex it is.” Rather like a spider’s web, one might suggest.

Gorovoy has continued to look after Bourgeois’s work since her death and, because of his hand in curating this ARTIST ROOMS exhibition, it is as close as possible to having her own input. The 20 works on show are largely selected from the last 20 years of her life and are arranged thematically according to motif. “I am a woman without secrets,” Bourgeois proclaimed. “Anything private should not be a risk.” Certainly, as you walk through the four galleries, Bourgeois’s private inevitably becomes your own, as you seek out points of reference, take on suggestions and create meaning. Bourgeois was keen for viewers to respond as they wanted, but, at the same time, she was forthcoming with stories relating to the individual pieces, their creation and their inspirations. Gorovoy and the team have therefore selectively provided such information on the gallery wall panels and these are a valuable resource, helping the viewer to understand something of the context in which they were produced.

For example, 10am Is When You Come To Me (2006) is a portrait of Bourgeois’s friendship with Gorovoy. Their hands and arms are depicted in a series of gestures, drawn in pencil, watercolour and gouache, spread over 20 sheets of music paper, creating a symphony or choreographing a dance. They are displayed here for the first time in two towering columns, in an amazingly tall room with looming white walls uninterrupted by windows. Bourgeois’s hands are identifiable by her gold wedding band, although the act of drawing around her arms, attempting to define her physical presence, is more like the act of a child than a married adult. The use of red, quite common in her work, is suggestive of heightened emotion, and the dynamics being represented here are those of a close bond. Bourgeois once commented: “When you are at the bottom of a well, you look around and you say, who is going to get me out? In this case, Jerry comes and presents a rope.”

Many of the works show Bourgeois’s intense fear of abandonment, perhaps precipitated by the loss of her mother when she was 21. Couple I (1996) is a pair of fabric bodies, clinging tightly together, co-dependent, becoming one. Between them no boundaries remain. Quite literally, they are interwoven. There is something uncanny, as the bodies, genderless, headless rag dolls, are familiar and beloved, but here, somehow, they become monstrous. Hanging, suspended at eye-height, they confront the viewer directly, wavering, uncertain, nowhere near as authoritative as a sculpture placed on a plinth, but in other ways weightier – certainly in how they stay in your mind. Just like Eyes (2001-5), watching you, emblazoned in your own mind’s eye long after leaving the gallery.

Sewing is key to Bourgeois’s work and something that became more significant as time went on and she began to make works with garments and fabrics she had collected over the years. A woman’s activity but, at the hands of this artist, subverted – or could one say perverted? As a child she was brought up assisting in her parents’ tapestry workshop, repairing missing feet and legs. Perhaps from here comes her obsession with body parts – dismembered limbs and phalluses – almost unidentifiable. Fallen Woman (1981) is a case in point. Is it a club? Is it a penis? The hair on one end could be a foreskin. The image of the fallen – or falling – woman emerged in Bourgeois’s works in a painting she made in the 40s. Associated with helplessness and failure, it reappeared frequently, including in my favourite piece in the exhibition, Nature Study (1986). Here, it is brought together with the motif of the spiral, another key emblem in Bourgeois’s oeuvre, representative of freedom, but also offering a way of controlling the chaos, reassuringly constant and continual, a mandala of sorts.

It is suggested that many of the works on display are self-portraits, including Janus Fleuri (1968) – a bronze and gold god with two heads; one male, one female; one looking to the past, one to the future – and Untitled (2010), one of Bourgeois’s last works, with a mound of berets forming heaving breasts.

Of course, you cannot talk about Bourgeois without mentioning spiders. Known in the UK largely for her enormous Maman (1999), made for the opening of Tate Modern in 2000, spiders also first appeared in Bourgeois’s work back in the 40s, albeit only in drawings at that point. In this exhibition, one sits proud, holding a cage containing a marble egg. Protective. Overprotective? Maternal. Alice in Wonderland-like in its towering dimensions. Another is positioned high up in the first tall room, face down, ready to lunge and land on your neck, suspended – as per the other hanging sculptures – by a sheer silk thread. Bourgeois explicitly connected the spider motif with her mother, but here, in her late works, she becomes a spider herself: sewing, suspending, creating spirals and weaving webs. The exhibition as a whole is the actual self-portrait, encompassing many contradictions and ambiguities, fears and ambivalences, and attempting to repair them, to control the chaos, to cage the baddies and to take charge. “I am not what I am,” Bourgeois said of herself. “I am what I do with my hands.” 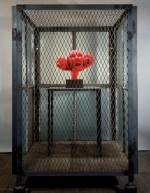 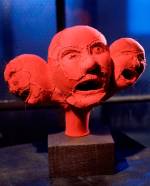 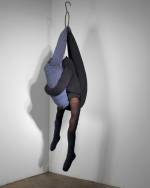