Laura Owens’s dynamic abstract paintings, accompanied her own quirky audio guide, ensure there is never a dull moment in this vibrant exhibition 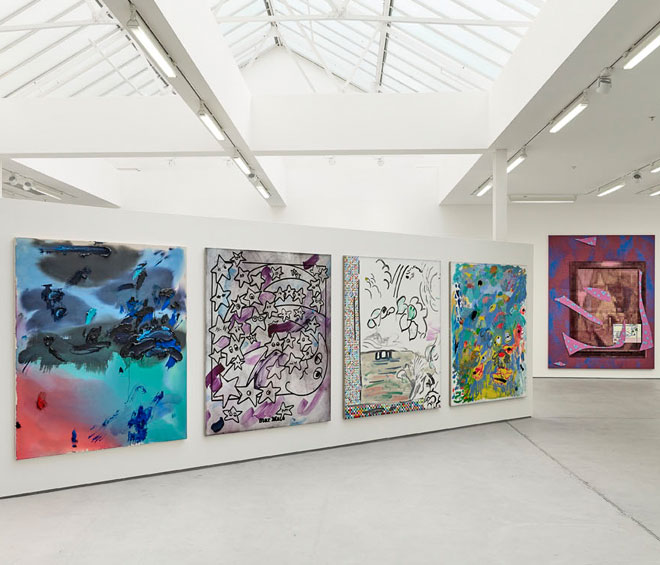 Instead of an accompanying press release, American artist Laura Owens’s exhibition at Sadie Coles, London, has a dedicated website, why11.com, which adds an additional layer to the dynamic, abstract paintings on show. Owens (b1970) does not give much guidance on how to interact with her work, for which she has employed both digital and mechanical techniques, and viewers are left to work their way through their various elements. There is a lot to be digested, especially with her large-scale paintings, which burst with vibrant colours, shapes, lines and textures.

This is perhaps where the website comes in. It works by way of a drop-down menu, from which the viewer is invited to select individual paintings, each listed by a number – Painting 003, Painting 053, Painting 151, and so on. Each painting comes with a short audio clip giving a brief discussion of the work in the artist’s voice, an anonymous voice, or a computerised one. The idea is similar to the audio guides that can be purchased when visiting exhibitions at public galleries, although Owens’s is free to access – just plug some headphones into your smart phone – and is far more abstract than your ordinary, polished audio guides. The clips are snippets of conversations, which are not always easy to follow, and the website is programmed so that, if the user selects the same painting again, a different audio clip is played.

By the entrance of the gallery space is Painting 003, a large-scale canvas covered in disordered swashes and lines of black, blue and pink, outlines of stars and dark planet-like circles. The piece resembles a constellation, and the word “Stars” is printed in bold, black lettering at the bottom of the composition. In an audio clip accompanying the piece, we are told that the gritty texture on the canvas is sand: “It ended up working with the painting … it looked like stars.” Other paintings employ a similar style and palette, such as Painting 003, a black outline of a giant teapot decorated with outlined flowers, with the words “Time for Tea” printed along the bottom edge of the canvas. Elsewhere, there is Painting 101, a “Beach Collection” of outlined shells and starfish.

The audio clips accompanying the individual paintings gradually give us information on how the individual paintings in the series are connected, aside from their obvious stylistic overlap. Owens explains their formal connections – we find out in Beach Collection (Painting 101), that the artist used the CMYK printing technique for the series. Alongside their formal qualities, we also find out about their thematic links. Time for Tea (Painting 003) is “maybe the most perfect of the colouring book paintings”, which explains the outlined shapes, yet to be coloured in (although the swashes of colour point to attempts). They are also based on Owens’s summer vacations, we are told; most of them are associated with the beach, but Time for Tea reflects the artist’s stay in the UK.

The “colouring book paintings” can be used as a model for engaging with the rest of the work in this exhibition. Owens’s paintings, both large- and small-scale, require time and imagination from the viewer, in order to be grasped, or coloured in, as it were. In another audio clip (Painting 013), the artist introduces herself and her paintings in the gallery space: “Hi, this is Laura Owens. Before we start looking, let’s reflect where we are. This location was designed for you to train your eyes and senses on objects, and talk to your neighbour or yourself about what it is you are looking at.” Interaction between the viewer and the painting, and between the viewers themselves, is important for Owens. It seems apt then, that her audio guides are brief and fragmented; as with the colouring book series, Owens gives outlines of thoughts that are to be filled in by the viewer, or used as starting points for discussions.

While Owens’s colouring book paintings have a uniting theme, her other paintings are more abstracted, composed of various elements layered on top of each other – such as Painting 053, a collection of cloud-like forms that are filled in with random letters, grids and printed images, set against a blue background. On top of this, Owens has also attached small sections of wooden grids. The viewer is not given much information in terms of how the various elements fit together. Even in the accompanying audio guide, Owens is unable to provide a succinct explanation. “I think there’s some airbrush on this one,” the guide suggests. “Or was it a wash that really spread out? I don’t really know.”

Much of the artist’s work comes from experimenting and, as this show reveals, the results are unpredictable. While some of Owens’s paintings have familiar links, for the most part, each work stands out as an individual, such as one of her small-scale paintings consisting of an old-fashioned tennis racket attached to a monochrome blue canvas. Then, on the other side of the room, there is Painting 031, a large-scale work of overlapping, dark, cloud-like forms, with a rotating wooden strip attached to it. In the audio clip, Owens says: “I am unsure what was really happening throughout this painting. It seemed like a lot of things were being decided as we went, especially due to, just like compounding mistakes that were happening. But then another painting was made.” The experiment pays off. The eclectic variety of Owens’s work commands attention, ensuring that there is never a dull moment.